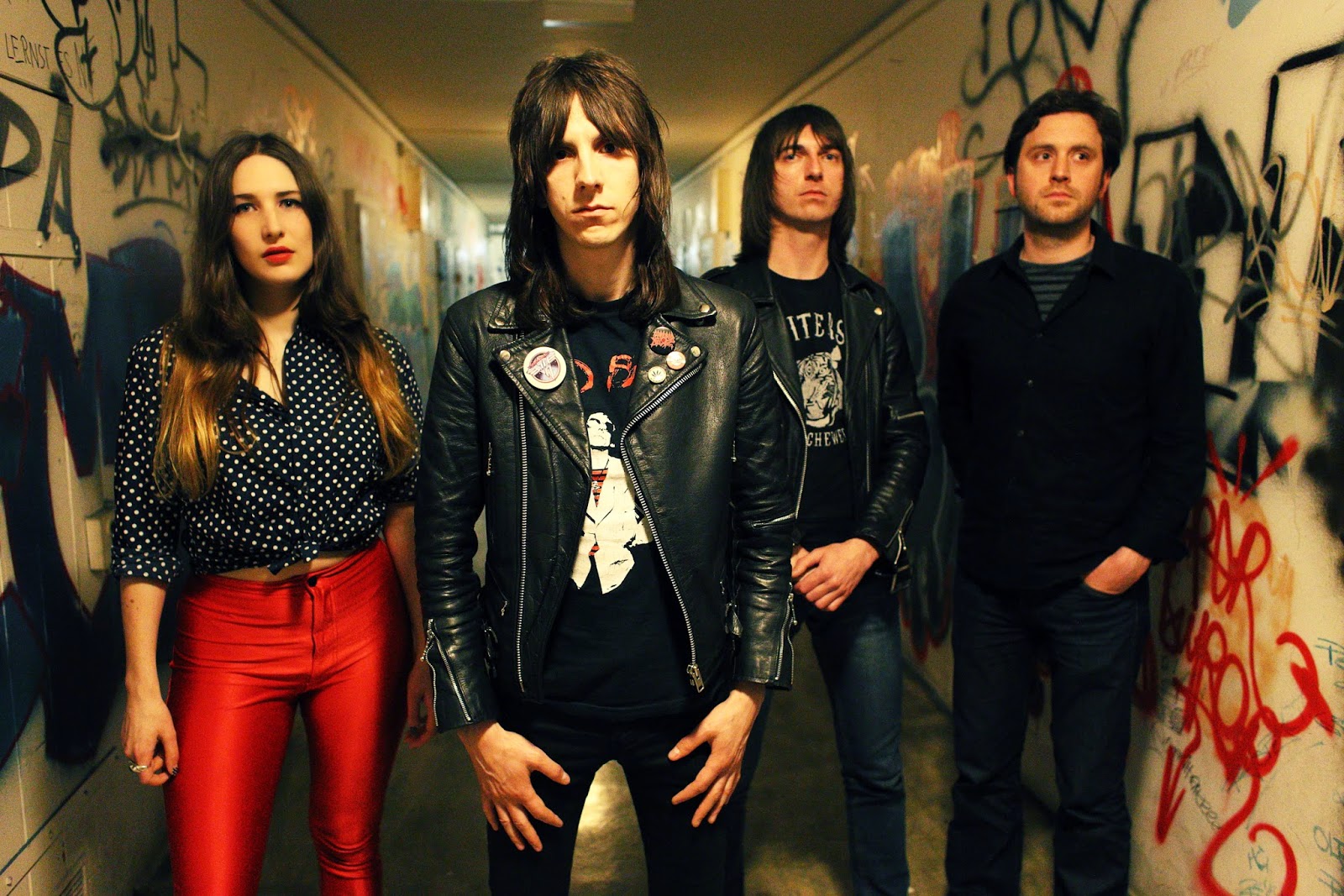 Crusaders of Love aren’t just an excellent band that take tips from past rock n’ roll royalty like Marc Bolan, Johnny Thunders and Alex Chilton, they’re a force that struggles to preserve a time in rock n’ roll history when music mattered, a time when people took pride in their record collection and actually knew a little about the band that was emblazoned on their T-shirt. I may be preaching to the already converted and it might sound like a terrible cliché in the world of underground rock n’ roll, but evidence seems to show that this ideology is dying in popular culture. Art has been reduced to “entertainment” and consumed like a fast food cheeseburger. Music like what the Crusaders of Love play deserves to be savored. Only then will your soul receive the sustenance it needs and deserves to carry on.

Let’s start out with some introductions.  Who are the Crusaders of Love and what do you all do in the band?
ALEX: I'm Alex, I sing and play rhythm guitar. Fabrice is my co-captain, he plays lead guitar and sing backups, then comes the rhythm section with Didine on bass and Max on drums.

You guys are based in Lille, a beautiful city in northern France rich in history. In fact, I read that there are records that the area has been inhabited as early as 2000 BC! All that is well and good but what’s it like playing in a power pop rock n’ roll band there?  Is there a good, supportive scene in Lille?
ALEX: It looks like you know more about Lille than I do ha ha. But yes it's a very old city though not much of a rocking place. I don't know any other band here that plays the same kind of rock n’ roll we do. Some people here like us, some don't, and some don't get it I think. Sloppy reverb drenched garage rock is the popular thing these days in France. So yes we feel a little alienated but, we play the music we like and won't compromise so it's all cool.

You guys came out with a new 12” EP titled Sacred earlier this year.  I want to ask you about the title.  Are you referring to anything in particular as “sacred”?
ALEX: Sometime I feel like people and especially young kids don't really give a shit about genuine rock n’ roll anymore. It seems like we live in a world where nothing is sacred anymore, everything is artificial, disposable, from corporate music to movies...  etc. You know, when they make a new Robocop movie, what's the point, the original was great. Why can't we just stick with it and come up with new ideas?

You guys have toured a lot, all over Europe and even The States a couple of times (including a house show in my hometown of Phoenix, AZ) How are American and European audiences different?
ALEX: I feel like the American audience is more committed, from what we experienced. Maybe it's because we were a French band and were kind of “exotic” to them, I don't know. There's not really any difference except everyone is covered with tattoos in America. We loved it and we really want to come back, it's been four years already since the last time. I remember the Phoenix house show well, we all got very drunk and smoked weed with some people. Some guy interviewed me and Fab in his truck. That was a fun night, and I saw a scorpion.

There is a folk story about the first time John Lennon met Bob Dylan. Lennon was a huge Bob Dylan fan and he asked him what he thought of the Beatles and Dylan said “It’s good but you guys aren’t really saying anything in your music” and of course John Lennon was devastated by this comment. Do you think music has to “say anything” to be significant or poignant?
ALEX: I don't like when music goes political and shit like that, it bores me because I always thought the music comes first. I think you can be touched by words sometimes because it makes you feel like you've been there or it takes you somewhere, kind of like when you read a book, it stimulates your imagination. But I don't really like when it gets too arty or poetry shit. I think The Beatles were more popular than Bob Dylan; he was jealous and just wanted to depreciate John Lennon. 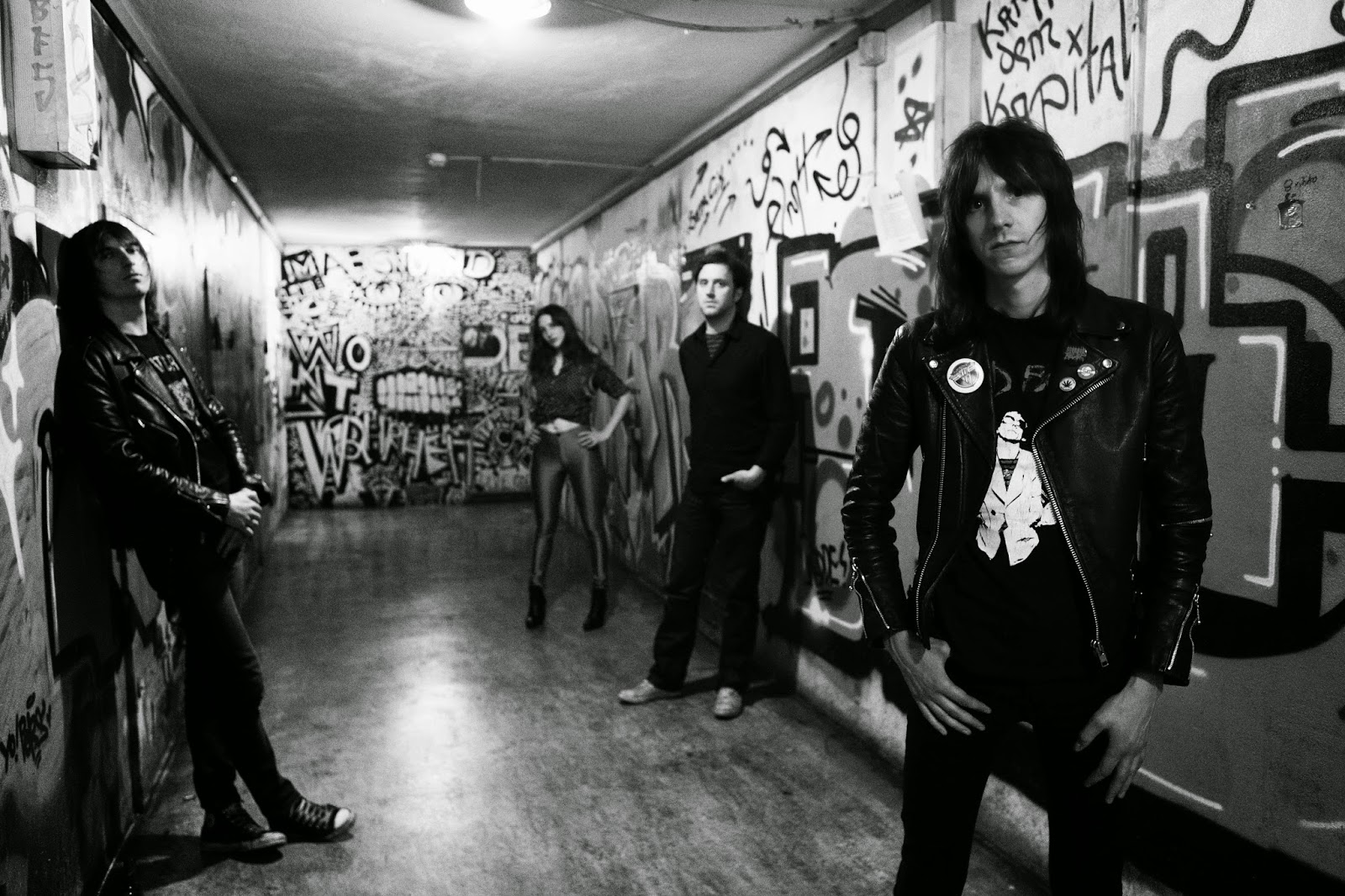 I was reading an interview with Keith Richards and he said that anyone that buys digital music is getting “short changed”.  Do you agree?
ALEX: I only bought digital twice. I didn't really feel like I got ripped off but I didn't like it either. It's cliché to say that but, yes I think the object is important. When I was a young kid just getting into music I would always look at the pictures in the booklet listening to Guns n’ Roses, the object was definitely important to me. So yes I agree with Keith!

When people walk away from a Crusaders of Love show, what do you hope they take away with them?  What do you hope they are feeling?
ALEX: T-shirts and LPs... Ha, ha, ha!  We want people to have a great time, we want them to be surprised and leave with our songs stuck in their heads at the end of the night.

If Crusaders of Love could tour with any band in the history of rock n’ roll, who would it be and why?
ALEX: Guns n’ Roses! Because they're the reason I pick up a guitar when I was 11 years old.

Where can people go to hear or buy your music?
ALEX: Bandcamp, I ship all orders myself so let me know if you want me to write you kind words in French. Amandine can spread perfume on your LP too. All good record stores should have our records, ask for it! Or come to shows! Otherwise I think you can get the digital stuff pretty much everywhere, iTunes, Amazon, Deezer... you can find our LPs pretty easily on lots of online stores too.
What lies ahead for Crusaders of Love for the rest of 2014?
ALEX: We are currently working on new material for our next full length. We may also start recording some of it. I'm not sure we'll be touring much for the rest of the year apart from shows here and there. But we're planning a big tour for 2015, possibly America!

Crusaders Of Love - Can't Get Enough from Marcus Wilén on Vimeo.

Posted by Audio Ammunition at 1:53 AM