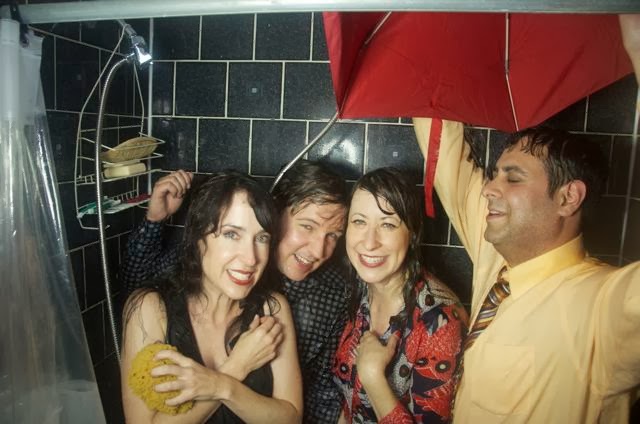 Brooklyn, New York’s The Recordettes play a unique brand of loud, campy, blown out, fuzzed up bubblegum rock.  The music is played with such fun and fury; I can only imagine how amusing seeing them live would be.  Their debut 7” just came out earlier this year on the No Front Teeth recording label out of the U.K.  This label, in case you are unaware, is usually reserved for acid spewing 77-style punk rock like The Gaggers or Ricky C. Quartet.  So the fact that someone at NFT recognizes the inimitable talents of the Recordettes makes their debut record that much more fascinating.  Why do those Brits always seem to recognize good American music before America does!

Please introduce yourselves and how do you contribute to The Recordettes Rock ‘N’ Roll machine?
TONY: I am Tony Lofi, amazing singer and guitar player for The Recordettes. Also, a huge liar.

DAVE: My name is Dave and I play drums.  I also make balloon animals at Bar and Bat Mitzvahs.

SACHA: Hi I’m Sacha. I keep the fancy beat on the organ.

Where are you all from originally?
TONY: I am the prouder owner of a French Canadian accent.

SACHA: I was born in Vancouver, BC Canada and grew up in San Diego, California.

What is the bands origin story?  How did you all meet up and start playing music together?

TONY: The bass player is my wife, I was in another band that broke up with the drummer, and I ask the keyboard player to play with us when I was drunk on my first 4th of July. I know, super glamour.

ANNA: Tony and I are married. That’s a NSFW kinda story but I’ll just leave it at that for now. Tony met Dave when he joined Big Riff; on bass. It’s  now a defunct band where Dave was a drummer. Tony and I always said we would never start a band together because we didn’t want to start hating each other. But then lo and behold, we were powerless when it came to a shared love of playing Cramps-inspired Rock ‘N’ Roll. So far, we don’t hate each other. Sacha and I know each other from way back, from various bands, and when Tony and I ran into her at a July 4th party last year we asked her to join us at our first show (later that month, opening for Shonen Knife at Asbury Lanes in NJ) to take over guitar duties on “John Waters, Can You Please Be My Father?” when singing those sad, heartfelt words rendered Tony too sad to continue playing guitar. After that, despite her best efforts we never let her go. She had to go get pregnant and have a baby before we’d let her miss any shows.

DAVE: I attended a seminar on better living through positive thinking.  Tony was there.  Also we played together in a band called Big Riff when he first moved to US of A...and so the judge decided that the most fitting punishment was playing drums for The Recordettes.

SACHA: I was a plant in the crowd who they would “randomly” select to play on John Water’s when Tony spontaneously got so depressed by his memory of rejection that he had to stop playing

So you list The Archies, and The Ronettes as influences.  What connection, if any, do you think these bands and punk rock have?
TONY: Those are all bands that real punk rockers listen to. (Please, do forward all the hate mail to me)

ANNA: Maybe the right answer is “I think punk is more about an attitude than a style of music” but honestly, I don’t think either of them were all that punk. Just awesome. I don’t think we’re that punk either. I mean, we’re pretty nice and don’t trash hotel rooms or anything. Maybe that’s just cause we’re too broke to get hotel rooms. I guess if we had one we might trash it. We won’t mess up people’s houses who put us up. We have some songs that are kinda punk, but they’re really equal parts punk, poppy, garage, girl group…we’re maybe a little more punk, musically, than The Ronettes and The Archies and we can get away on a ‘punk’ bill but we’re actually pretty poppy and generally happy. What an uncool answer that was.

SACHA: Well one obvious evolutionary link is The Ramones.

Listening to your music, it seems a lot of it has to do with relationships and subjects along those lines.  I was reminded of this story I read about John Lennon asking Bob Dylan what he thought about The Beatles early on and Bob Dylan said you’re great but your lyrics aren’t saying much.  Of course Lennon was devastated and began writing more ‘serious and meaningful’ lyrics.  Do you think the Beatles would have been better off telling old Bobby Dylan to stuff it and keep writing about girls and love?

TONY: I only liked the Beatles when they were a cover band and I hate Bob Dylan only as much as I hate John Lennon. My lyric hero is Paul Caporino of M.O.T.O. I am also too dumb to remember any songs if there are more than 10 words in it.

ANNA: What’s more serious and meaningful than love? Dylan had great political songs but I’d never say when you sing about girls/boys and love you aren’t saying much. Although Lennon telling Dylan to “stuff it” would be funny.

DAVE: Short answer: yes. Long answer: "I want to hold your hand" is really about an existential crisis of faith.

SACHA: Dylan was talented but kind of a narcissistic jerk…just sayin’…

So The Recordettes are from NY and you’re new 7” ends up on the No Front Teeth recording label that’s out of the UK.  How did that end up happening?
TONY: Europe created the US of A so it's only normal that we try to make them lose some money by putting out our records. Also, London punks have better taste in music.

ANNA: After we recorded a couple songs, we emailed every label in the known universe and No Front Teeth was the only with the ‘foresight’ to put it out.

DAVE: We were told there would be fish and chips

SACHA: Lot’s of hard work by some industrious Order Muppets 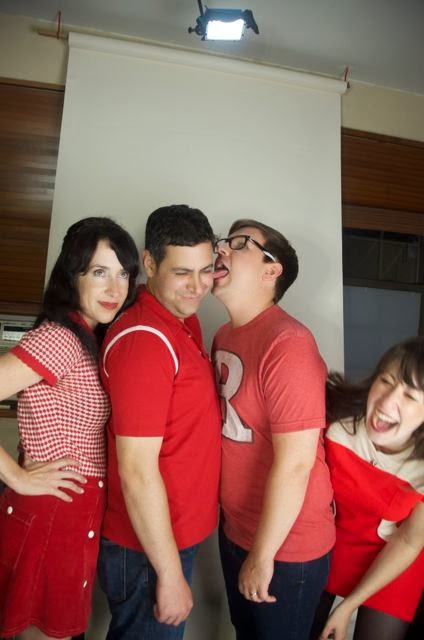 Can you expand on the John Waters song a bit and tell us why exactly you think he’d make a good father?
TONY: He has a mustache, which is the most important thing I look in a dad.  I have a dad, but not an American one and since I live here now, I feel it is my duty to find an American daddy. John Waters were my first and only idea because anyone who directed Pink Flamingo will be allowed to babysit my kids.

ANNA: Because his last name kinda rhymes with father, if you have a French Canadian accent.

DAVE: I don't have an elektra complex, but if I did.  I think we know who it would be wink wink.

SACHA: He’s a true inspiration- Imagine having a father with such artistic vision and achievement.

I don’t like using the term “guilty pleasure” because I don’t think anyone should be made to feel ashamed of anything they like.  However with that being said, what to you listen to that you think a lot of fans may be surprised by?
TONY: I love all the music I listen to. From ''Danse Le Mia'' from France best rap group IAM to Quebec legend Mitsou with her song ''Bye Bye Mon Cowboy''

ANNA: I am obsessed with Paul Simon and Jim Croce. I could listen to “American Song” and “One Less Set Of Footsteps” all day and never get sick of them.

SACHA: Sometimes I listen to ARE Weapons song “Don’t be scared- be cool” while jogging when I’m stressed out.

What music have you unleashed on the world and where can people go to hear it or buy it?
ANNA: Right now we just have our first 7” on No Front Teeth records, which is available through their website, our Bandcamp (www.therecordettes.bandcamp.com), this great site undergroundmedicine.com, and some awesome record stores like Black Gold, Academy Records and Co-op 87 in Brooklyn and 33 Tours in Montreal.

What does the band have in store for us in the near, or not so near, future?
TONY: World domination, obviously, a duet with John Waters, an Australian tour and hopefully, no more baby, because the official Recordettes baby is the cutest of them all.

ANNA: We’re playing Saturday Sept 28 at the Elm Bar in New Haven, CT, Thursday October 17 at the Paper Box in Brooklyn for CMJ, Saturday October 26 back in CT, at 33 Golden St in New Haven, and then, Saturday November 16 at Matchless in Greenpoint, Brooklyn. It’s a daytime show (2pm). Tonight at Bowery Electric in Manhattan and Sat Jan. 11 at Don Pedro in Brooklyn. We’ll record our album early ’14.

DAVE: I hope to continue drumming until carpal tunnel sets in.  The Recordettes is the most fun band ever, and I love my bandmates - no joke.  I would love to continue playing to audiences to 2 or 20 or 200.  Also making a double album of Yes covers.

Listen to their fabled No Front Teeth EP right here on their Bandcamp page!
www.therecordettes.bandcamp.com

Posted by Audio Ammunition at 8:17 PM