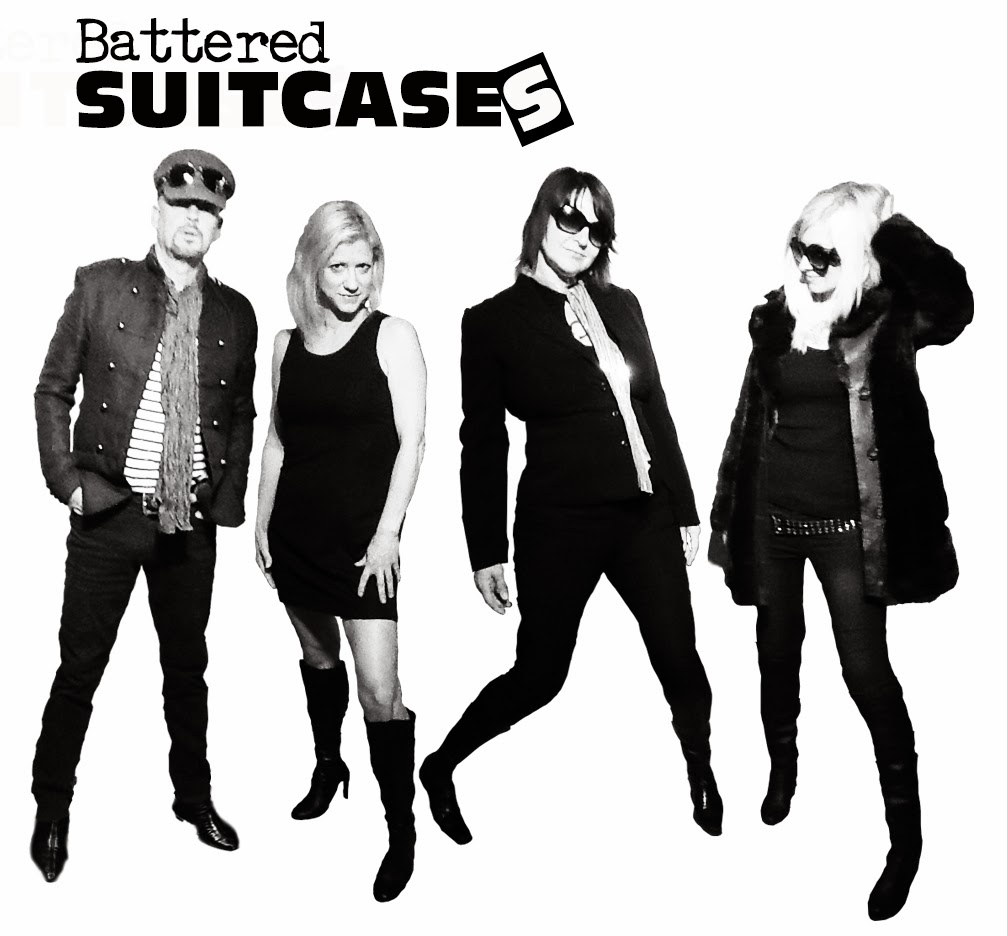 Cool is a word that in my opinion is thrown around far too much and has lost a lot of its meaning.  Miles Davis, David Bowie, Paul Newman, Steve McQueen that’s what I think of when I hear the word “cool.” Battered Suitcases exhibit a similar saunter and confidence that is necessary to pull off a complete rock n’ roll package well.  The music if power packed with brazen lyrics peppered with references to old Beatnik verse, brazen guitars, and drums that crash and explode like an avalanche falling on your face.  While all of this is going on simultaneously, the band still manage to keep that particular “cool.”

The band is based out of Phoenix AZ, but where are you all from originally?
Sharon: Wilkes-Barre, PA
JEssica: Phoenix, AZ
Frank: Philadelphia, PA
Sue: Red Oak, Iowa

I know you guys are from a few other bands (Labor Party, Venomous Pinks) but what is Battered Suitcases origin story?  How did you all meet and start playing music together?
SHARON: I had everything written in my head, all the words and music for a few years now, just never seemed to be the right time to get things started. Then after a tragic personal loss I decided I was done waiting to have enough time. I began to think of who was out there that might be into playing this kind of stuff.  My first thought, Jessica, I had long admired her style of drumming from her days with Sonic Thrills, Hell on Heels and her current band, Atomic Zombies. One night last fall our bands were playing together at the Icehouse Tavern and I told her about the project I had in mind; I was beyond delighted when she told me she’d be down to play. We decided to get together after the holidays. Then I went on a hunt for a rhythm guitarist, who could also handle some bass lines too. I remembered that Sue was available, I knew her mostly as a bassist then recalled that she played guitar with Breakfast of Champions, so I contacted her, she’s a perfect fit.  As for my lead guitarist, I mulled over the decision, who could play what I hear in my head, who would really get it? Silly to think I had to even consider it, no one gets me more than Frank does and I seriously don’t know a better guitarist local or otherwise. I couldn’t have been more fortunate to land this brilliant line up. I’m very grateful and wholeheartedly satisfied.

I notice a lot of rock n roll poet types listed as some of your influences (Bob Dylan, Jim Morrison, Jim Carroll) and you quote old Beat writers like Jack Kerouac and Hunter S. Thompson on your Facebook page.  What sound or concept did you have in mind when starting Battered Suitcases?
Sharon: All these people I mention as influences were/are Godlike to me. Even our name comes from the famous Jack Kerouac quote from “On The Road” When I came up with the idea for Battered Suitcases, I was mostly thinking of a rock n roll format to showcase my poetry and music, a way to bend the words, ringing them through the melodies, allowing myself bleed out somehow with it all; that desire became Battered Suitcases.
In the band’s bio you also listed “experience” as an influence.  Care to elaborate?
What else is there, everything we do, think, say or feel comes from or leads to it?

The video for the song Normal features clips from the 1902 French film Voyage dans la Lune by Georges Melies.  It looks great, was it fun to make?
Sharon: It was a scream! Frank came up with the idea, shot it and edited it, on an iPhone! He did a remarkable job and all for practically nothing. I think we may have started a fun new trend!

Jessica: Yes! "Normal" was such a fun experience.  All shot with an iPhone! Amazing. And Frank did a great job putting it all together

Sue: The video was a blast. This is the first time I've ever been involved in making a video and we had such a fun time.

Frank: Yes we shot our parts on my iPhone. I printed out some stills of background shots from the movie. We taped them up on a wall on the back of our house and stood in front of it. Kinda silly but it worked out pretty good. 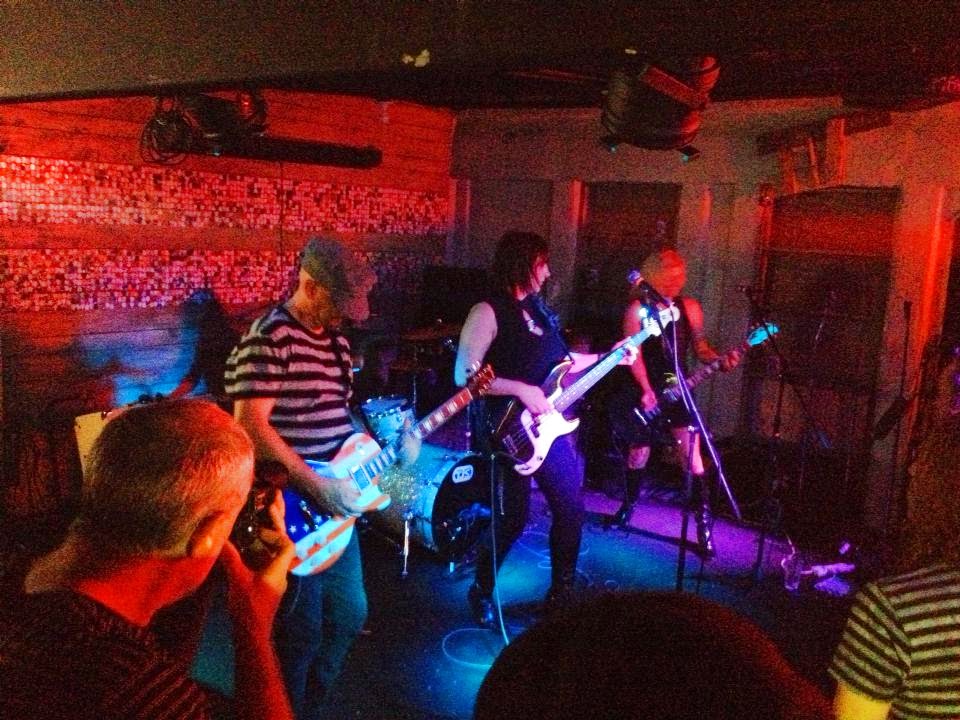 You recently played your first show at Tempe Tavern I believe, how did that go for you?
Sharon: It was smashing, a great line up, good sound and the staff there is always so cool to work with. I had so much fun!

Jessica: I thought the tavern was a great place for our debut gig, always a good crowd, and great sound. I feel very comfortable on that stage, and we were so excited about that show! It was a great lineup too, a lot of fun.

Sue: I thought the first show went great. I was super nervous since it's a new genre for me, but all of the friendly faces in the crowd put me at ease.

Frank: It went great! We did exactly what we want to do.

With so many great local bands popping up everyday around the Phoenix/Tempe area these days, do you find things getting a bit more competitive out there among the bands now?
There are always a ton of bands popping up, we’re one of them.  If we wanted to compete we’d join the office softball team or something.

I don’t like using the term “guilty pleasure” because I don’t think anyone should be made to feel ashamed of anything they like.  However with that being said, what do you listen to that you think a lot of fans may be surprised by?
Sharon: Parliament Funkadelic, Hank Williams, Sr., BeBop, it really it runs the gamut.

Jessica: If someone had only heard me playing with the Battered Suitcases, they may be surprised to hear that I’m a huge Guns N’ Roses fan. I don’t listen to them as much anymore, but I will always love that band. They were one of my high school faves. I’m sure I've got quite a collection of music that people may be surprised by.

Sue: My favorite music is punk (specifically the Ramones), but I secretly really love some musicals.  My favorites are Grease 2 and The Birdcage.

What music have you unleashed on the world and where can people go to hear it or buy it?
Currently we have a 4 song EP out entitled “Vainglorious” you can buy it on Bandcamp or at any of our shows. You can also check out a couple videos on You Tube.

What does the band have in store for us in the near, or not so near, future?
Our up coming dates are Jan 7th erratic radio, Jan. 18th at The Lost Leaf w/ Andalusia Rose (Wendy Gadzuk formerly of Tuscons 440's and Whiskey Bitch, now hailing from Oakland, CA, Jan 25th with The Father Fugures at Rips.

Posted by Audio Ammunition at 7:45 PM