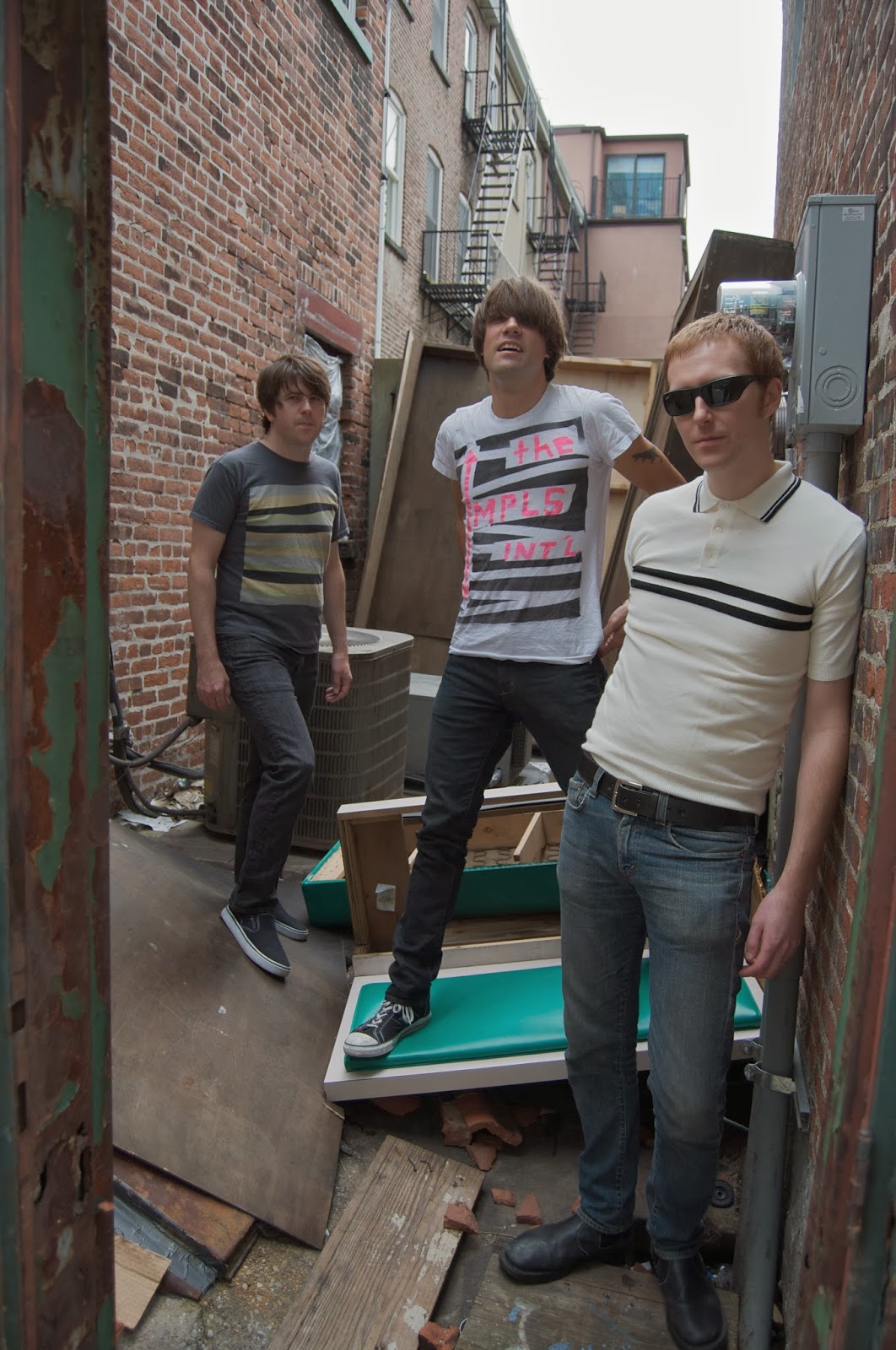 When I first heard the full-length album Point of Action (on LP on Deranged and CD on Dirtnap Records) by Impulse International I felt an overwhelming sadness and disappointment.  Sad and disappointed in myself that a record of this magnitude can exist in the world since 2009 and I am barely hearing it in 2013!  Boy did I miss out on this one (I still hang my head in shame as I am typing this).  Impulse International set loose music that’s got elements of catchy as a cat’s claw punk rock bang, power pop groove amid stabs of new wave strut while holding hands with 1960’s, mod , and r & b cool.  This band somehow chews all of this together, swishes it around and spits it out in your face, and the taste is delectable.

Who’s answering the questions here?
This is Adam, a.k.a Julius Buck, a.k.a Captain Beef Shield

Who is in the band and how do you all earn your keep in it?
I play guitar and sing.  JD Romeo plays the bass and Rob does the drumming.

Are you guys all originally from the NY/NJ area?
I wish we all were.  I took a like hiatus to go back to school and have kids.  That took me to Florida where the grandparents are aplenty and the University is cheap.

You said the band formed when you were “orphaned from previous bands”, that’s a hilarious way of putting it!  What bands went to the corner store for a pack of smokes and never came back for you guys?
My old band, Dirt Bike Annie, started losing members one by one but we would still keep playing shows.  A member would announce their last show and have a big send off .  Eventually, it was just me and the drummer.

Rob played in Jersey City bands the Ankles and the Alpha Males.  I think there was band rivalry that caused both dissipated at the same time.  It’s hard to share a drummer.

JD played in Philly hardcore and noise bands.  He has a semi-hollow Fender Coronado, which would feed back like crazy.  He got kicked out for being too darn loud.

What sound did you have in mind when starting The Impulse International?
I had a friend Heather (a.k.a. Suzy Sleaze, a.k.a. Saturday Suzie) who would make me mix tapes (actual cassettes) of garage and power-pop bands when I was in Dirt Bike Annie.  She turned me on to all this great 70s/80s Rock’N’Roll like the Boys, the Only Ones, Holly and the Italians.  It was the perfect musical progression from pop-punk, still catchy and fun, but with a little more bravado and swagger .   I tried changing the style of my song writing in Dirt Bike Annie, but we just couldn’t pull off.  It sounded forced and lame.  When we broke up I started writing non-stop; simple, catchy, wild, Rock’N’Roll.   Within two weeks, I had a new band together.

Who were some of your musical role models growing up?  Who inspired you to learn how to play music and pick up an instrument in the first place?
Well, obviously, The Jam is an influence, being a powerful, clean tone, three-piece punk rock band.  As for mod style, its cool for bands to look sharp.  I cringe ever time I see a guy in shorts on stage.

Growing up, I was a skateboarder.  So I would by every tape of every band I saw referenced in Thrasher and Transworld magazines.  So, The Dead Kennedys, Agent Orange, Black Flag, The Dickies, Butthole Surfers.  I guess I grew up on quintessential American punk rock.  In the late 80s, punk rock was still pretty fringe.  All my friends were into metal (like Ozzy) or guitar wankery (like Joe Satriani).  None of them played bass (who would want to be the guy who stands behind the guitar wankers?  Right?).  Anyway, a friend drove me to the music store, helped me pick out a bass and I was playing Crazy Train by the time we left the store (there is not really much to the Crazy Train bass line).

You are recording some new songs, how is that going?
Being that I live in Florida right now, this is hard.  Rob and JD just sent me some files of Bass and Drum takes they did, but living in a house with wife and two kids, finding the time and space to lay down proper guitar over dubs is a challenge.   When I do have a chance to record, sometimes things just down sound right and I’m back to the drawing board and I’m banging my head thinking I’ve just wasted so much time and have nothing to show for it.  That can be frustrating.  I miss the days of having a regular rehearsal space where all the gear is set up and I can just flip some switched and press record.

There is also something to be said for recording in the same room as the rest of the band.  I know Guided by Voices used to record long distance and all, but man, it is hard.  You miss so much when you can’t communicate on the spot.  And Skyping while you’ve got all your music software open just isn’t convenient.

I recently read that out of all different art forms, music has the power to alter a person’s disposition the fastest.  Do you agree with this?  Do you have any favorite music that you can put on that will always lift you from a slump?
Well, I don’t know if its true for everyone, but yeah, crank up some Jossie Cotton and try to stay in a bad mood.  On tour I would listen to Andrew WK’s first album (specifically, Its time to Party) right before we would have to play because it would put me in a 100% psyched mood every time!

Do you think Rock N Roll can still be an influential force for kids in a fast food age?
I hope so.  I’m in college now and this kid was all shocked and in awe that I actually know band’s names and had whole albums by these bands on my iPod.  The kids I met in school mostly listen to and rely on Pandora to introduce them to new music.  There was one girl in my class that never heard of the Violent Femmes.  I almost threw up.   I imagine the ones that want to find unique Rock’N’Roll will seek it out.  When they hear it in a movie, they’ll scan the credits to see the band name and then get that record, or pirate download it or whatever they do.  The medium may have changed, but teen angst can’t be gone, right?

You guys have been around for quite a while now, and have been around this great big world.  What has been the most memorable show the band has played good or bad?  Where was it and what made it so unforgettable?
By far, the Idiotarod show we did in Brooklyn.  The Idiotarod is this crazy dress-up shopping cart race through Brooklyn and Manhattan and The Impulse got to play the after party.  It was a giant costume party with bands and DJs and everyone was having a ball.  They Roller Derby girls got on stage for our song “1 Girl 8 Wheels” and it was just wild.  I lost my phone at the after-after party.  It was that good.

If a year from now you were celebrating the best year the Impulse International has ever had, what would you be celebrating?
We would probably be celebrating a tour.  If we were tour again, that would mean people really cared to see us.  Sadly, having family responsibilities sort of means that you don’t get to hit the road to play VFW halls to 15 people anymore.

What music have you unleashed on the world and where can people hear it or buy it?
Greennoiserecords.com
Derrangedrecords.com
Gethip.com
Hmmm…a quick Google search tells me that eBay may be a good place to shop, too.

What are does the band have in store for us in the near future?
New songs for sure, but probably not a vinyl release.  It may have to be online only as this internet does not seem to be going away.


Posted by Audio Ammunition at 6:53 PM