Druglords of the Avenues 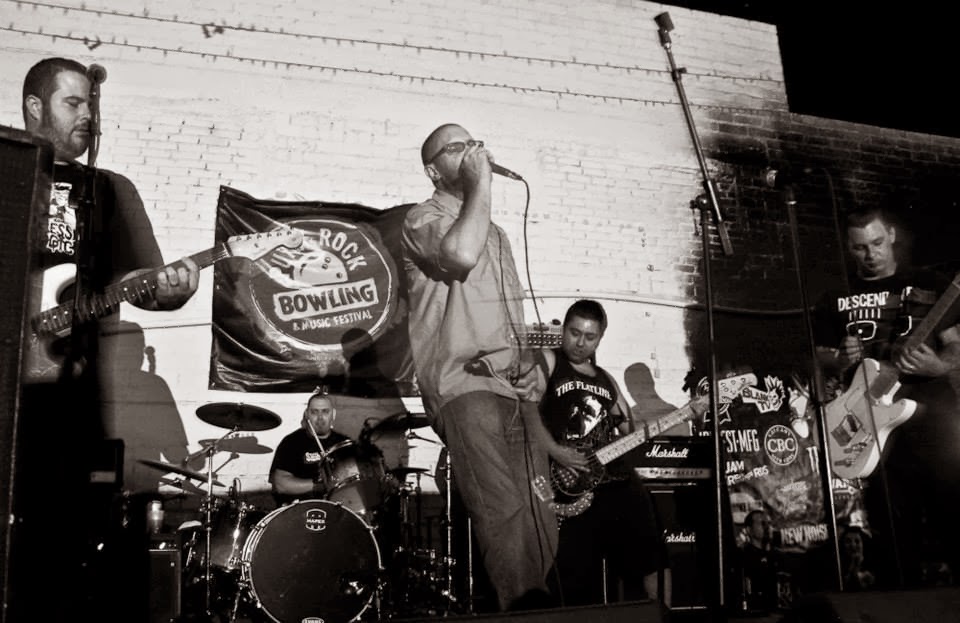 I remember the first time I saw Swingin’ Utters in Mesa AZ (with AFI in tow!) back in the mid 90’s I was floored.  I thought punk like what the Swingin Utters brought to the table, with that much melody, soul and ferocity was dead and gone.  Vocalist Johnny
“Peebucks” Bonnel has since been involved with a few other bands including Filthy Thieving Bastards and more recently Druglords of The Avenues which just released a new album (their 2nd full length) on Red Scare Records in May of 2013.   Druglords play a
brand of tuneful straight forward punk with heaps of charisma and passion that’s been a trade mark of a Peebucks band since the
very beginning.

Please introduce yourself and how do you contribute to Druglords of the Avenues?
I'm John Bonnel and I do vocals, lyrics and album art in the band.

Where are you all from originally?
I'm from Santa Cruz, Ca., Matt Grayson is from Modesto, Ca. and Jeremy Korkki is from Flagstaff, AZ. The two Robs are from
Mars.

What is the bands origin story?  How did you guys all meet and start playing music together?
I met Matt working at Cinderblock, a company that printed shirts for touring bands. He was in a band called Forfeit The Day that
played pretty fast intense hardcore punk. I sang a little piece on one of their songs they recorded. They lost their singer for some
reason and Matt was a fan of SU. We had similar taste in alternative music and decided to put our interests to work. I told him to
write music and I will take care of the lyrics and melodies. We got offered a chance to be on a Replacements tribute record on
1-2-3-4 Go! We jumped at the chance to do Favorite Thing and it just snowballed after that, in a positive direction.

When starting Druglords of The Avenues, was it another outlet for your songwriting that didn’t quite fit in with Swingin’ Utters or Filthy Thieving Bastards?
It was definitely another outlet, but not because it didn't fit FTB or SU. I think I have more freedom and less insecurities with
DOTA because the rest of the guys are more open to my weirdness. It's really a lot of fun to come up with lyrics for Matt, Rob and
Jeremy to sing back-ups to without losing it. Those guys can't look mean singing, "Might we dance at your gay and lesbian disco?"
Homophobia is prevalent in this world and it needs to be pointed out how ignorant and hurtful it is.

I must inquire about the name.  In sounds so cinematic, like it could be an old lost Scorsese film?  Where did it come from?
I got that name from a documentary on a Jewish community in New York's Alphabet City. It was said more than once by the
narrator and it just conjured up so many ideas and images. It was first used as a FTB song title, but I always thought it sounded like a band. When I read books or watch movies or TV I'm constantly looking for lyrics, song titles and band names. When I was younger I thought all the best band names were taken, but now I know that's not true. My resources are endless! In everything I do,
songwriting, drawing, screen printing, sculpture, I always am aware that it will never be the best. To strive towards better art is my fuel to live and love. I feel the greatest band names have a danger mixed with a heroic quality. Sex Pistols, The Clash, The Kinks, Wu Tang Clan, Tribe Called Quest are such great names to me.

In your bands bio, you list new sounds and new art as influences.  Can you name some contemporary bands or musicians
that influence the Druglords of The Avenue sound?
King Kahn and the BBQ Show, Sharp Objects, The Caves, Parquet Courts, Pixies, JD McPherson, The Widows, La Plebe, The
Death Set, ToyGuitar, The Spits. 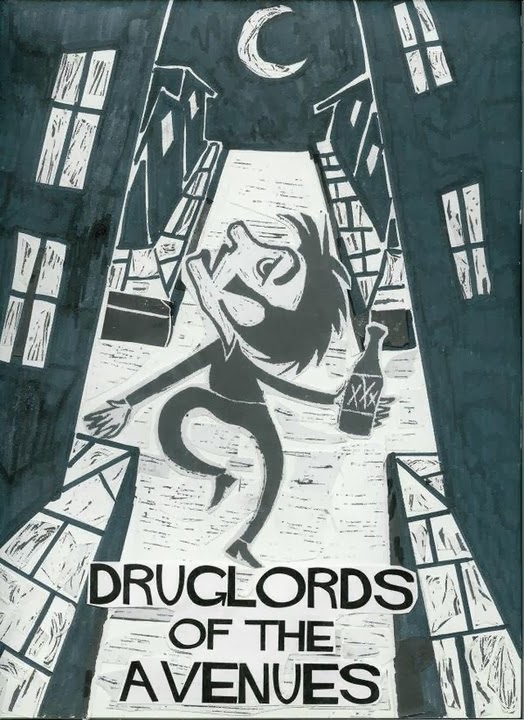 And speaking of art, Johnny I didn’t realize you did the artwork for Druglords and FTB album covers.  It’s quite
impressive.  You also have quite an impressive portfolio on absolutearts.com.  I remember seeing the album artwork for a
FTB album and the art really left an impression on me.  I didn’t know anything about the band either!  What or who
influenced you to embark on this endeavor as well?
Thank you first. Yeah, man, I just love this way of getting my art across the world. Sometimes getting into a gallery is such a pain
in the buttock. I really like the idea of showing my work on shirts, albums, tattoos, flyers, patches and the like. It's more grassroots and humble. I'm pretty low-key when it comes to my art. It pisses off my dad's generation that I'm not out there selling my art. It's
just not me, fuck capitalism, it's gross!

I’ve heard that out of all different art forms, music has the power to alter a person’s disposition the fastest.  Do you agree with this?  Do you have any favorite music that you can put on that will always lift you from a slump?
I can agree that it's the fastest, but my life has been changed by all forms of art. Reggae always seems to lift me up and a few of the albums I listen to are Toots and the Maytal's Funky Kingston, The Wailer's Burnin' and Culture's Two 7's Clash.

I noticed you guys play shows around the bay area, any plans on taking Druglords on the road?
We would love to but I can't afford it. I believe I will die broke with no health issurance, so my main goal is to situate my family as best I can. Music has never paid the bills.

I don’t like using the term “guilty pleasure” because I don’t think anyone should be made to feel ashamed of anything they like.  However with that being said, what to you listen to that you think a lot of fans may be surprised by?
Abba Gold is one album I played at Cinderblock where everyone was sort of shocked I liked. It's great music and no guilt what
so ever.

What music have you unleashed on the world and where can people go to hear it or buy it?
Swingin' Utters have released around 12 on FAT, Filthy Thieving Bastards have released 4 on TKO and BYO and Druglords of the Avenues have released 2 on Red Scare. Interpunk and record stores and the labels are where you can get them.

What do Druglords of The Avenues have in store for us in the near, or not so near, future?
We're currently writing new material for an EP maybe? I will continue to create and write until I die so keep your eyes and ears pealed!

Posted by Audio Ammunition at 7:06 PM