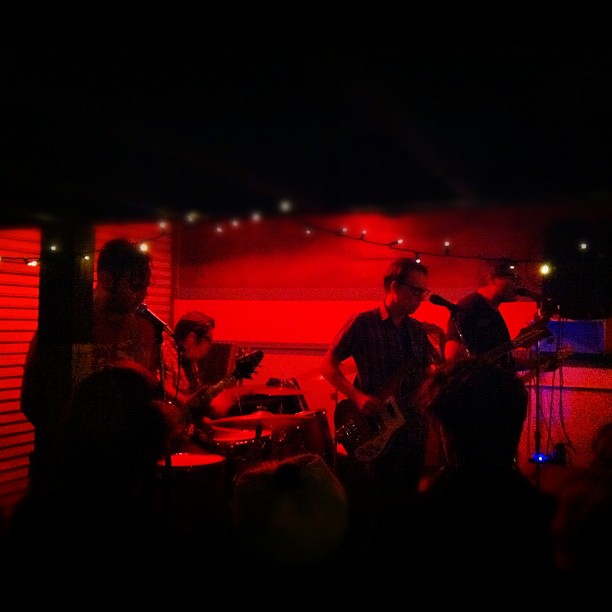 The Resonars are full of the vocal harmonies and jangly guitar melodies that made the early to mid-1960’s so sweet before the Vietnam War changed the social and musical landscape. Originally beginning as a full band, later becoming a solo project for years and now recently becoming a full band again at the insistence of Burger to play this year’s SXSW. The Resonars seemed renewed and full of purpose with an EP and a few LP’s being released and re-released. The band’s brand of Byrds and Hollies influenced songs is poised to introduce them to a whole new set of ears.

Where is the band from?
Tucson, AZ

How did the band start?
Matt: It’s been a solo recording project since 1997. The performing band started when we were invited to SXSW early last year.

What was the reason to release the Long Lost Thoughts EP where Matt plays every instrument and sings everything by himself after a few releases? Bright and Dark is done the same way with only Matt playing everything too. Has there been a release where the entire band plays on the recording?
Matt: The four-way split released on Trouble In Mind next month will be the first with the entire band.

In 2012, it looks like a full band was brought together for a SXSW performance. Can you elaborate on this story?
Matt: Sean Bohrman called Isaac, and asked if he could cajole me into playing a Burger Caravan show in Tucson and SXSW a week later. Isaac brought in James and I brought in Jeremy.

Jeremy: As far as my end is concerned, I was playing with Matt in another band called The Freezing Hands.  At this time The Resonars was still a one-man show.  Matt was toying around with the idea of making The Resonars a live act.  He asked me if I would like to be a part of it.  I answered yes, of course, with no hesitation.  I had heard a good chunk of his music, though not all of it, and thought it was great.  It was precisely the type of band I wanted to be in.

Do you think music can still be a vital force in such a disposable age?
Jeremy: Music will always be a vital force.  The landscape may have changed—it seems there is a lot more out there now because bands don't have to wait around to be snatched up by a big label in order to get exposure.  With so much music available for a minimum of effort, it does seem to create a lot of flashes in the pan, acts that will probably not enjoy as long a stint of popularity.  That's just the nature of the beast these days.  It doesn't mean that tan act is bad or in it for the wrong reason.  It's just the way of the listening public.  Things come and go quickly—at least that's how it seems to me, but the love of music will always be there in one form or another.

Matt: There’s always gonna be kids, adults too, who need music to reflect their feelings, or to make them feel better so in that sense, absolutely. Can it be a vital force socially? I don’t think so. Everything is too splintered. There are microcosms, like the Burger scene in Fullerton where there seems to be an unending flood of talent, bands exchanging ideas and influencing each other, it’s a culture. Of course, that is an observation from an old fart in Tucson, I could be completely wrong.

How do the band hook up with Burger? It looks like Burger put out Crummy Desert Sound, That Evil Drone and re-released Bright and Dark.
Matt: I had That Evil Drone recorded and the label I was on at the time didn’t seem that interested. I was despondent and ready to quit making records when the Makeout Party rolled in to Tucson. Sean and Lee had just started Burger and I kind of sheepishly asked them if they would want to release it. They were genuinely excited to do it, and as anyone can tell you who knows them, their excitement is pretty contagious.

How is the Tucson scene? Are there any similar bands that play in the same vein as The Resonars?  I know Tucson is known primarily as a college town with University of Arizona being there.
Matt: The Tucson scene is OK. There needs to be more youth and there are some new bands I’m genuinely excited about. The Resonars are pretty unpopular, though. People think we’re too loud and we’re not arty, gimmicky, or doing the Americana thing.

Jeremy: Not being from Tucson originally, I don’t have as good a grasp on the "scene" as the other Resonars do.  It seems to me that what we're doing is fairly unique, in that our sound does have a heavy sixties rock influence.  There are certainly other bands I enjoy seeing here, but I can't think of any others that go for the sixties vibe to such a degree.

It looks like the band is playing Europe in the fall. Do you know any bands The Resonars will play with? How excited is the band for this opportunity?
Matt: Yeah, we’re touring Europe in September/October with a bunch of other Trouble In Mind bands. We’re so excited about it that we’re all willing to give up our jobs to do it.

Jeremy:  Personally, I'm really excited for this tour.  It's a great opportunity to see some cool places and share what we do with another chunk of the world.  I know we'll be playing with Mmoss, which will be awesome.  I'm a big fan of their stuff.

50 years ago people used to buy music and get their water for free, now people pay for water and get their music for free. How do you think this affects music in any way?
Jeremy:  It has its good points and bad points.  Growing up, it was much harder for me to get my hands on music.  I had to scrape up the money for it and hope that one of the local dealers had something in their stock that was to my liking.  I get a little envious of the younger generation sometimes because of all the easy access they had to music from a young age.  I wonder sometimes if I'd be a different or better musician if I had what they did.  In the end, though, I think that this wide availability—whether it's paid for or not--is a positive thing since it's all for the love of music.

Matt: Whereas I, as a kid, would have to wait months to find a copy of say, a Pretty Things record, today’s kids have access to it instantly. Someone tells them about a band, it sounds interesting, and they can hear them that minute. I think for people who are looking to be inspired, it’s definitely a good thing.

I’ve read a couple interviews where The Resonars records where done primarily with a 4-track. In blurt-online there is a quote “I got a hold of a four-track reel-to-reel and it ended up breaking. I got an eight-track reel-to-reel and didn't like it. Then I started working with an ADAT and that sound was far too clean. I also tried an eight track cassette, but nothing seemed to work," he says. "I was getting more and more frustrated, until finally I just said ‘fuck it' and went back to the original four-track cassette.” How influential is that in the sound of the recordings? What is it about the 4-track that is so special in the recording process?
Matt: It’s the only machine I’m truly comfortable with. I’m a total dunderhead when it comes to machinery and recording technology. With that 4-track (it’s a Vestax MR-44, by the way) I can hit record and not worry about the bullshit and just focus on the music. I got it to the point where I can make it sound at least as good as any 1960s garage-punk recording.

"Photographs, if you give them the time, they can almost create a sound. You start hearing the soundtrack behind this photograph. It doesn't matter what the images are, they always sort of set something off[.]" Most bands usually just use life experience as a lyrical starting point. What brought about the photograph idea?
Matt: I don’t even remember! I think I was just leafing through one and a song popped in to my head, and then another, and another.

What’s next for The Resonars?
Jeremy: I am going to keep rocking with these fine fellows.

Matt: We need to start recording a new LP, the first to be recorded by a full band. We tour Europe for three weeks in September/October. After that, who knows? I’d like to stay on the road!