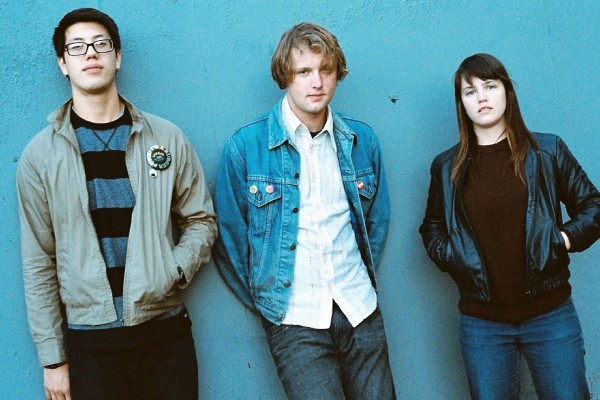 Big Eyes from the start has had a tougher edge to them as evidenced on their debut Hard Life, but recently the band has shown a softer side. By softer, I mean switching from early-Joan Jett toughness to early Muffs style pop that still has teeth. Just listen to tracks Being Unkind and Back From The Moon, which were both, featured on Pitchfork and will be on the upcoming LP Almost Famous. The band opened the year being part of two split 7-inch releases with Audacity and Mean Jeans and has no plans on stopping with an LP and planned European tour this fall.

Where is the band from?
Seattle, by way of New York and Reno

Who is in the band and what instrument do they play?
Kate Eldridge - guitar and vocals
Chris Costalupes - bass
Dillan Lazzareschi - drums

How did the band start?
Kate: I started Big Eyes as sort of a solo project, I recorded a handful of songs in my room on my laptop with electronic drums and stuff back in fall of 2009, then I brought the songs to the dudes I was playing with at the time.  The lineup has changed a few times but we are solid as ever now!

How is the recording process going for the next LP titled Almost Famous? It looks like Grave Mistake putting out the LP too? After listening to Being Unkind, it seems like this new LP will be more pop than previous work. Will this be the case?
Kate: The record was recorded and mixed back in October (2012) at Red Lantern Studios by Adam Becker.  We knocked it out in 6 very long days, and I am very super proud of it and very excited for people to hear it.
Chris: Even though the first single released was very pop oriented, by all means we are a poppy band, Almost Famous expands on all of our influences, including hard rock like Kiss and Alice Cooper, punk like Descendents and The Dickies, 80’s power pop like Nick Lowe and The Knack, and so on.

Recently, Big Eyes had two tracks, Being Unkind and Back From The Moon featured on Pitchfork. How does the band feel about it? Pitchfork has a lot of followers.
Chris: We are excited for anybody to listen to our music, and it's nice to know that our music is accessible.  We get just as much enjoyment from people liking our music as we do making it.

How did the split 7” with Mean Jeans come about? Did the band get together and pitch the idea or was it the label’s idea?
Kate: We met Mean Jeans in the fall of 2011 and we immediately clicked with them.  We toured together to Awesome Fest in August 2012 and decided to put out a split together.
Chris:  Within minutes of first meeting them we were at the bar next door slamming Jagerbombs and plotting our Rock ‘N’ Roll takeover.

Originally Big Eyes were from New York, but ended up moving to Seattle. What was the reason or reasons behind the move?
Kate: Nirvana!!!  Just kidding. It's really hard to have a full time touring band based out of New York.  Rent is too expensive, everything is too expensive. Seattle is beautiful and I wanted to get out of NY so I did.

Do you think music can still be a vital force in such a disposable age?
Chris: Music is a timeless art form, regardless of what platform it's delivered on.  Live music, vinyl, digital downloads, it all has the same result, at least on certain types of people.  People take much influence from music, it affects their daily decisions.  I find that to be incredibly true for myself and the company I keep.

50 years ago people used to buy music and get their water for free, now people pay for water and get their music for free. How do you think this affects music in any way?
Chris: People need music just as much as they need water, so as long as they're getting enough of both that's fine with me.

I know Kate is the primary songwriter, but how has the new rhythm section influenced the sound of the band, arrangement of songs, etc.?
Kate: I think the new lineup is tighter than ever.  Chris and I lock in together really well, probably due to how much we practice and play together.  Dillan is a natural.  He can play any instrument you hand him and look good doing it.  The three of us have a great chemistry.  I feel very comfortable with these guys, and it's been easier than ever for me to write songs, and so my songs have becoming a little more complex.

In Amp Magazine, Kate stated “I mostly listen to music from the 1970’s and 80’s. And pop punk–I love pop punk. . . . The Replacements and Descendents are definitely two of my biggest influences.” What other band have had an indirect or direct influence on the songwriting? What bands did you have in mind when starting this band?
Kate: I was listening to a lot of Scared of Chaka, Cheap Trick, and The Muffs when I started Big Eyes.  I was definitely planning on starting a catchy punk band, but I've only ever played in catchy punk bands so I wasn't really out of my element or anything.  I just play what comes into my head, I don't ever try to write riffs or songs with a specific band or genre in mind.

Big Eyes seems to be putting in a lot of time on the road. I had read before the release of the first LP, Hard Life, and the band had toured quite a bit. Now I notice this again with the band having had two mini tours before the new LP, Almost Famous. Is this a way to test out material or just tighten up the songs? Any thoughts on this?
Chris: It's a way to conquer boredom.
Kate: We usually don't really plan tours around releases, but we had a limited edition copy of the new LP with us on this past west coast tour.  We just like to tour a lot.  Touring has definitely helped with tightening up the new songs though, which will be great for the "official" Almost Famous tour which starts at the end of May.

Where can people hear the band?
The best place to hear us is live!
www.bigeyesband.com
bigeyes.bandcamp.com

What’s next?
Kate: We have a 4-week tour to the east coast coming up (May 28th - June 22nd).  We are going to Hawaii in July, and we are going to Europe in October.  Other than that, writing new songs!