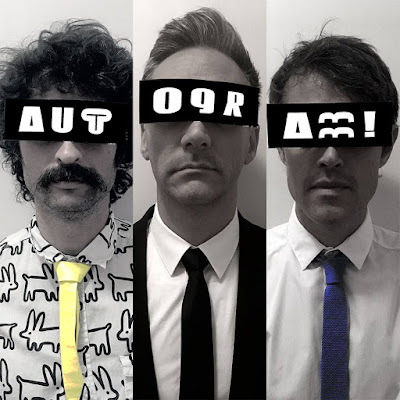 Vancouver's Autogramm combines pop hooks with New Wave style synthesizers to create a sound that is not only unique, but highly infectious.  But don't take my word for it, their LP and two EP's they've released so far have all been met with critical acclaim. This band somehow manages to make cold machines sound as if they have a heart.  Is this the beginning of the rise of  sentient machines? Have androids started to dream of organic sheep? If they have, I can't think of a better band to usher in the revolution!

Let’s start off by telling me who’s in Autogramm and what everyone does in the band:
C.C.: The Silo plays drums and does backup vocals, I play bass and do backup vocals and the multi-talented Jiffy Marx plays guitar, synth and does lead vocals in the band.

How did you all meet and decide to play music together?
C.C.: I was actually living in Berlin playing with the Dysnea Boys when I met The Silo. We did a couple shows with his former band Black Mountain. Jiffy and I have known each other since we were kids in the all-ages scene. Jiffy was actually visiting Berlin when we decided to start the band. I think we were listening to 20/20 at the time.

Jiffy: I actually wrote “Jessica Don’t Like Rock n’ Roll” on that trip, then went home and recorded the first demo of it with The Silo, so some might say it was always meant to be.

The band is currently based in Vancouver BC yeah? It seems like there’s a lot of great bands out there these days.  Do you ever feel any kind of competition with the other local bands at all?
C.C.: I think it’s the opposite. We’ve all had a long run of bands so we hope nothing but the best for the other Vancouver bands, especially the younger bands who are really killing it. The Sore Points and Chainwhip are a couple of my favorites.

Jiffy: Wait, those dudes are all in their mid-thirties and have been in a ton of other bands and you’re calling them “the younger bands”? So you mean younger than us bands i.e. almost all other local bands!

Silo: We’re the old scene survivors. All the other rockers our age have gone straight or died. ; /


You guys released your debut LP last year called What R U Waiting 4 on Nevado Records. One of my favorite songs on there is “Cool Kids Radio.” Can you tell me about what inspired it?
C.C.: I wrote this one with my pal Rich Jones who plays with Michael Monroe out in Finland. The original version is a whole lot different. The original title was “Cool Girls”, which everyone thought sounded gross. I’m very happy with how these guys made it sound.

And speaking of “Cool Kids Radio” you guys have made videos for that song as well as “Jessica Don’t Like Rock n’ Roll.”  Did you enjoy the experience you’ve had making them?  Are you like me and wish more bands would do videos?
Jiffy: I wish there were more outlets for them since they take a lot of time and money to make them. Unfortunately it seems like reality TV killed the video star.

C.C.: We all had a lot of laughs doing the videos. “Jessica” was kind of a spin on videos like the Knack’s “My Sharona” while the video for “Cool Kids Radio” was based on 80’s style campsite horror films. We’ve been thinking of doing a remake of a Billy Joel video for the next one.

You name Devo, Tubeway Army, The Cars and Ultravox among your influences.  Is this a sound you were aiming for from the beginning or did it just develop with time?
C.C.: The song “Jessica” sounds a lot like The Cars. It was a bit of a blueprint for the subsequent writing.

Jiffy: Yes, we’ve always been very conscious of who we’re ripping off;)

Silo: Sonic tips-of-the-hat are an obsession of mine in the studio. I’m a bit of a new-wave-o-phile.


Autogramm recently came back from a European tour. What was that like for you guys, did the band come back tighter and brighter or….the opposite?
C.C.: I think tours always make you tighter as a band, but I also think we became tighter as friends too. Except for maybe that one night, hahaha...

Jiffy: Ha well we got super tight on that tour but played a show a week later and were back to our sloppy punk selves. And the band didn’t break up afterward (or during!) so whatever doesn’t kill you right?!

Silo: That tour was the greatest time. We got good, made friends everywhere we went, and jumped in SO MANY LAKES! We expected to have a good time together -- we always do -- but the shows were surprisingly good and we made some fans too!


It’s clear you guys were influenced by a lot of music that came out or was big in the 1980’s.  If someone came up to you and said “80’s music is trash”, what’s the one record you would hand them to try to convince them otherwise?
Jiffy: I understand if some people don’t like The Cars or The Go Gos as much as we do but if you think ‘Are We Not Men’ is trash then I literally wouldn't even waste my breath.

C.C.: Well I like everything from the 80’s from Ratt to Men at Work, so I probably wouldn't be the best person for that job. I don’t think I’d be very persuasive.

What’s in store for Autogramm in the near future? Any new music coming down the pipe or more tours in the works?
Jiffy: We have a video coming for the song “Bad Day” which was released as a Europe-only 7” single by Spain’s Jarama45 Records. We will also be making it available on audio streaming platforms for all your new wave punk and powerpop playlisting needs.

Jiffy: Just a few...lol. Somebody tell us if we need TikTok. We suck at “stories” so probably not:(

We urge you to please help support independent artists, labels, and venues by buying records, band merchandise, or going to shows. You can also show your support by following your favorite bands on social media and "like", "friend", "comment" or share their posts. Help get the word out, every little bit helps believe me.

Posted by Audio Ammunition at 5:21 AM