Space Raft: A Sonic Odyssey Through the Astral Plane 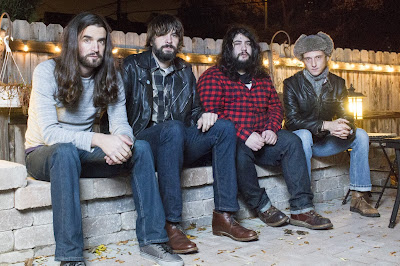 Milwaukee's Space Raft released one of the most enchanting records of 2014.  At first listen I barley caught my jaw from hitting the floor more than once. Now, how to describe this band to you, that is a tough one. Closest thing I can come to that is to ask that you try to imagine an alternate reality where Alex Chilton fronts for Hawkwind.   Space Raft's music is a swirling sonic landscape filled with heavy 70's rock guitars coated in 1960's Mersey Beat melodies.  The perfect summer sounds for sunbathing on the sand dunes of Mars.

Who is currently in the band and what does everyone do in it?
Tjay Christensen: Keyboards, Vocals
Tyler Chicorel: Drums, Vocals
Jon Heibler: Bass
Jordan Davis: Guitar, Vocals

How did you all meet and decide to play music together?
JORDAN: Tjay and I met through a mutual friend, I had been writing songs for a monster movie my friend Brian Perkins was developing and I needed a solid keyboard player that could play the stuff I had been writing at the piano.  We got together and worked on it a bit and thought it would be cool to form a band around some of that material,  so we started looking at finding some other musicians we’d like to hang out with. Tjay introduced me to his friend Tyler and I introduced them to my friend Colin Swinney and immediately we had chemistry and knew it would be a fun band to pursue. Colin moved to shortly after our initial practices so I introduced the band to Srini Radhakrishna, who played with us through recording our 1st album then subsequently moved to as well.  After temporarily having Justin Perkins fill in on bass duties we settled on my old friend Jon Heibler and that line up has remained solid ever since. The band has really grown a lot together from being my sort of brainchild or pet project into a very organic band. The upcoming sophomore LP is testament to that as it contains many influences brought to the band from the other guys.

What band or musician first inspired you to want to pick up an instrument and learn to play and/or write music?
JORDAN: The Beach Boys, I was obsessive about surf music as a kid. Between Carl Wilson’s Chuck Berry riffs or the Ventures instrumentals I knew that I absolutely wanted to play guitar. I don’t think I knew I wanted to write until I heard Nirvana in middle school, that might be cliché, but it was a big moment in my life.  I can’t speak for the other guys, but I imagine that was a watershed moment for them as well. I was raised in , there was an all ages club there run by Timebomb Tom called the Concert Cafe, and later the Rock and Roll High School.  Jon and I met there as kids, often playing together in similar bands. I know Tjay spent a lot of time there as well, he is a little older though we never bumped into him at that time. That place was special to a lot of people, we got to see all sorts of great punk and hard rock touring bands, definitely setting the course for many people’s lives in the area in getting them involved with music, including our own.

How would you describe your band to your grandparents?
JORDAN: My Grandpa refers to it as an orchestra for some reason, He likes old time jazz, country, and polka, and so I am not too sure what frame of reference I would have to use explaining it to him. I’d maybe tell him it sounds like Count Basie through a distorted radio, But Hell, he’s probably heard the Beatles by now. I think either of my Grandmothers wouldn’t really be concerned with what it sounds like, only that it makes me happy and that I feel compelled to do it.

What sorts of things do you typically enjoy writing songs about?
JORDAN: It changes too often to pin down, there are common themes present, but it’s mostly subconscious. The songs off of Space Raft’s upcoming sophomore LP “Rubicon” seem to deal mostly with mortality, self control, destiny, and existential questions regarding reality.  It was a hard year in my life I suppose.  I try not to write too literally and leave it open for interpretation by the listener. I could explain what every song I write means to me, but would rather people form their own conclusions. If I were to sit down next to Bob Dylan and he were to explain Visions of Johanna to me, there is a chance I might not care for that song anymore, I suppose I prefer to live with the imagery I have already created for that song in my head.

I’ve heard people say that playing and writing music is therapeutic to them.  Have you ever found this to be true?
JORDAN: It is, but I think any creative endeavor can be. To labor on something that doesn’t exist in the physical world can help to process some of the weight of being. It swings both ways though, I used to really obsess about music, to a point where it was unhealthy. Really beat myself up over what I thought I was capable of, I got to the point were it never was any fun because nothing was ever good enough. I have learned to relax lately, and only concentrate on the kinds of ideas that work and therefore have more fun at it. I think overall the quality of my work benefited from that outlook.  It’s easy to have fun in Space Raft, there is a very natural chemistry that keeps the atmosphere very light and jovial, even when we have lots of work to do we are still joking around. I feel very fortunate to be a part of it really. Everybody brings something to the table. 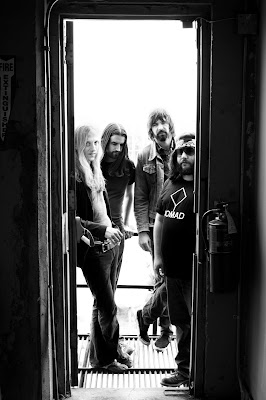 Does it annoy you or distract you at all to see some of your audience members fondling their phones while you’re up on stage performing?
JORDAN: It really doesn’t bother me, people enjoy themselves any numbers of ways. Who am I to judge?

After one of your shows, what sort of feeling or sentiment do you hope your audience walks away with?
JORDAN: I hope they understand that we work really hard at what we do, and that we are having a really good time doing it. Our 1st S/t LP was seemingly very well received in many different circles, and I hope our audience understands how much work went into making it.  Above all else, I hope they know that we appreciate them listening.

What is your favorite album to listen to from start to finish?
JORDAN: There are far too many albums to choose from. I could narrow down a few, but I tend to only really listen to music on my own time that I am currently inspired by, meaning, that one record would literally change week to week. Maybe this week it’s Neil Young’s Zuma, maybe next week it’ll be Big Star’s #1 record. Last Week it was The Saints Eternally Yours or ’s Hunky Dory, Last year  it was Serge Gainsbourg’s soundtrack to Cannabis, then it was the Easybeat’s Vigil and then the Beach Boys Today or Velvet Undergrounds 3rd. Who knows, I could list a hundred more but it wouldn’t help me pick one.  We all have different area’s of interest in music and all bring our personalities to the band. The one record we really all flipped out on as a band was a reissue of a 1970 Liverpool band called Rockin Horse “Yes it is”. Fabulous record, and very close to Space Raft oeuvre.

What’s the best advice anyone has ever given you that you still follow to this day?
JORDAN: Haha, I have never been very good at taking advice. My girlfriend Michelle reminds me I should slow down and live in the present. I think that is good general advice to follow. I can be quite the space cadet if left to wander amongst my daydreams.

What is the best way people can hear and get a hold of your music?
JORDAN: You can hear our self titled album on Bandcamp and Spotify
https://spaceraft.bandcamp.com/
You can hear the new single from our upcoming Rubicon LP at our website:
http://spaceraftmke.com/
Stream our New Single on DMR from Milwaukeerecord.com:
http://milwaukeerecord.com/music/space-raft-paper-airplanes-45/
Or you can buy our self titled debut and 7” (and our follow up April 15th) by from Dusty Medical Records:
http://www.dustymedical.com/
Or, if you are in you can buy Our S/T or our upcoming LP at Bachelor records:
http://www.bachelorrecords.com/spaceraft.html

What lies ahead for Space Raft in 2016?
JORDAN: Our sophomore album Rubicon will be out on Dusty Medical Records (US) and Bachelor Records (Europe) on April 15th and we have our Milwaukee release show booked on May 7th with some of our favorite Milwaukee Dusty Medical affiliated bands: Phylums, Midnight Reruns, and Platinum Boys. We are trying to book as many weekends we can for the summer and currently are in the early process of booking a European tour for later this year.  So things are coming together and we are looking forward to the adventure.

Posted by Audio Ammunition at 6:53 AM