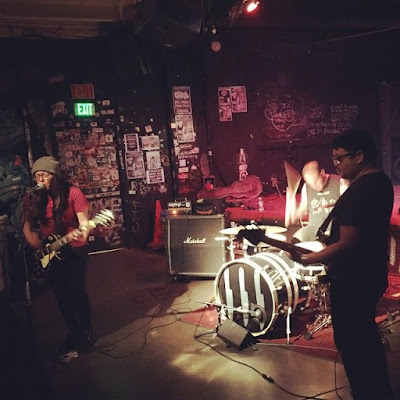 Causing a ruckus in the Bay Area since 2013, sunny California’s Long Knives are a trio inspired by bands like Jimmy Eat World, Discount and Jets to Brazil.  Long Knives take bold melodic guitars, booming drums and encase them with resounding, heartfelt vocals.  The band just released their debut EP last year and I was immediately entranced by it upon first listen.  Call it “indie rock”, call it “emo” but this band transcends musical genres. Long Knives play from the heart and that’s what makes their music so genuine and captivating.

Let’s start out with some introductions, who’s in Long Knives and what does everyone do in the band?
I’m Robert and I play bass. Thanks Audio Ammunition for having us.

I’m Connor, I play drums and handle the backing vocals

What band or musician has been the biggest influence in your life?  Tell me about the first time you heard them and how it changed you from that moment on:
KRIS: I'm influenced by so many bands and musicians and it constantly changes, but I am going to go with a band that made me want to start playing guitar and another band that made me want to start writing my own music, those two bands are Coheed & Cambria and Dashboard Confessional. I remember when I was 12 years old, I heard Coheed & Cambria's Second Stage Turbine Switch Blade for the first time, and I was sold on wanting to play guitar. I started off with a classical guitar, but it wasn't long until I switched over to an electric guitar (Epiphone Les Paul special) and channeled my inner Claudio Sanchez. Not too long after, I came across Dashboard Confessional's unplugged CD at a Coconuts store. Chris Carrabba just has a way of singing heartfelt lyrics and strumming his guitar in weird tunings that made me curious about the whole singer-songwriter thing. Since then, I would write acoustic songs and upload them on Myspace so friends and strangers could listen(I was playing in horrible metal/hardcore bands over the years so it was a nice to have that as well.). It wasn't until I was 19 that I started singing in a full band.

ROBERT: The Clash has always inspired me to listen to other styles of music, keep me open minded not just in music but everyday living. It’s hard to describe, all I can do is tap my chest. I first saw The Clash’s “Rock The Casbah” music video on an old black and white television as a kid. My other influences are the Ramones, The Jam, Jawbreaker, Dead To Me, Rainer Maria too.

CONNOR: I would be lying if I didn’t say that the Ramones and Rancid got me interested in punk rock and playing music in general. Those are certainly some of my earliest influences. As a drummer- some life/style/choice changing bands for me are Thin Lizzy, Alkaline Trio and Braid. Damon Atkinson, Glen Porter and Brian Downey are my drum gods.

Your song lyrics seem so personal, I’d be really surprised if you told me they weren’t autobiographical.  Have you ever written a song that’s just a bit too personal to share?
KRIS: Everything I write may be too personal, but writing is my outlet and I have no shame of exposing it even if it makes me seem vulnerable. That's never going to change. 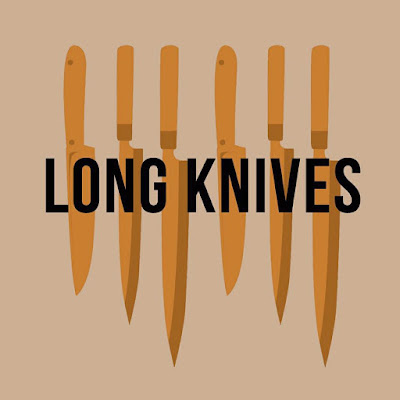 When you play your songs live, can you disassociate yourself from the places you were in when you first wrote them or do those feelings sometimes comeback?
KRIS: Every song I write is important to me. It's weird that before we begin to play a song, the memory and reason of why I wrote that particular song will pop up in my head and then we start playing. It's like I have to prepare myself and get that feeling out so that every time I play it, it's just as pure as the first time I played it.

I was reading an interview with Nick Cave once and he said that music has the power to affect people’s mood the strongest.  Do you agree with that at all?
KRIS: Oh, yeah, and any mood, too. I can put on Carry On's A Life Less Plagued and be angry due to pissed off lyrics and pumped at the same time because of how much I love the guitar tone and drums that compliment it. Then there's Slingshot Dakota's Their Dreams Are Dead, But Ours is the Golden Ghost! - that record will make me feel nostalgic and reminisce of the time when I first started attending shows in Brooklyn. It always puts a smile on my face. I could go on and on about this, but you get the idea.

ROBERT: I agree, music is a part of our daily lives. There’s a rhythm to life and music breaks the silence.

CONNOR: Most assuredly. Music will always be a lifeline, an inspiration a motivator and a detractor.

Long Knives just came off of an East Coast Tour with the band Divorce.  Have you ever played this part of the country before, and how do you feel it went?
ROBERT: The East Coast Tour was the longest tour I’ve ever been on. Three weeks on the road with Divorce is something I’ll never forget. We played through 14 states in 20 days and drove 5,200 miles and that’s not counting the miles flying out to the East Coast.

CONNOR: Kris is from NJ originally so I know she’s had plenty of experience in those parts and I did a short East Coast run with my old project Know Your Saints a few years back. It was my first time playing anywhere in the South, and in parts of the Midwest. I don’t think any of us really had expectations other than to play the shows and enjoy our time away from work/monotony. I had the pleasure of bringing along one of my dearest friends Chris Elizaga to fill in second guitar/ vocal duties and our deepest gratitude goes out to him for learning our set with two weeks and one practice under his belt. Check out Young Go Hards, Smooth Sailing or Hellgod for some of his sweet sounds. The gentlemen in Divorce were a blast. Fest was amazing. I must say, Columbus, Akron & Pittsburgh REALLY know how to treat a touring band.

Speaking of your live shows, what sort of feelings or sentiments do you want your audience members to walk away with after seeing one of your performances?
KRIS: This question has always been weird to me, ha! I play music because it is my outlet and makes me happy. So I guess the only feeling that I'd want to get across to an audience is that what I do is sincere and pure. I don't ever expect anything after a set, though. Honestly, a high five or "that was cool" is more than enough.

ROBERT: I’d like to think that they saw us at our strongest and most vulnerable and that we play hard since we don’t know of any other way.

You came out with your debut EP This Is Your Life on the Count Your Lucky Stars label last year.  Can you tell me a bit about the release?  The white and red splatter vinyl looks great by the way!
CONNOR: This recording was actually intended to be our demo. We recorded it with Patrick Hills at Earthtone Studios in Sacramento, CA in July of 2014 and threw it up on bandcamp shortly after. We opened for Empire! Empire! (I Was a Lonely Estate) the following October and Keith & Kathy approached us about doing a release with them at the show. Needless to say we were ecstatic. We couldn’t be happier with our CYLS family. Dave Downham mastered the record and it was released on that gorgeous slab of wax shortly there after.  Lucas Andrews of A Flight Of Yesterdays Graphic Design did all the amazing artwork and layout. The White and Red combination worked out perfectly, we’re glad you noticed!

ROBERT: This EP is the first recording I’ve ever been on! I learned a lot about all the work that goes on behind the scenes too. I thought the white and red splatter would’ve had more contrast.  Pirates Press did a great job and I love how the colors matched the artwork perfectly. It makes me think of strawberry ice cream with actual fruit.

On your Facebook page, you describe the band as “emo”.  It’s been a long time since I heard a band define themselves as that.  It’s a term that seems to have fallen out of favor with a lot of folks.  Why do you think the word “emo” became so “uncool” with people?
CONNOR: I personally feel like it’s a pretty lazy, all encompassing way of categorizing a pretty large, vastly diverse, sub-sect of bands. A large portion of the bands that I love & identify with use the word to categorize their music, so I don’t have any apprehension about using the same descriptor. There is a large resurgence of bands being released by Tiny Engines, CYLS, Topshelf and Polyvinyl that describe themselves as such and I think it’s great. When we use it, we’re giving a nod to the purveyors of the genre, ala the Promise Ring, The Anniversary, Knapsack, Rainer Maria, Jimmy Eat World even Rites of Spring…but I would be lying if I said we weren’t influenced by some of the more contemporary pieces to the puzzle as well (Into It. Over It., Taking Back Sunday, Tancred etc.) In all honesty- I feel like “emo” became a dirty word simply due to its heavy association with the early 2000’s and its inherent obsession with eyeliner and flat irons & more power to those who loved that version all the same. We are all subject to our own personal taste and while Thursday and Brand New may not be your cup of tea, a seminal “emo” band like Cap’n Jazz or American Football might be your favorite. The word “emo” describes both of the aforementioned whether you like it or not. I guess what I’m saying is “emo” is dead, long live “emo”…? I just said it so many times that it sounds weird now. 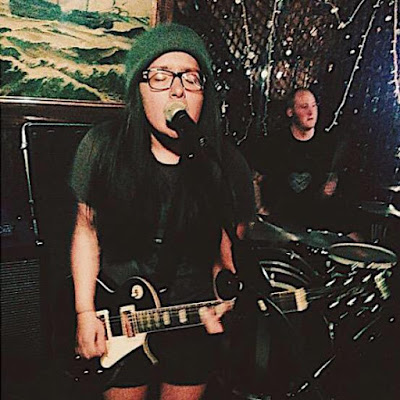 What’s the best piece of advice someone told you or that you read somewhere that you still follow to this day?
KRIS: The last thing my grandmother said to me was to never stop playing music and 7 years later, I'm still doing what she told me to do.

ROBERT: The best advice I’ve ever been given is to live life “a day at a time.” That way life won’t feel so overwhelming.

CONNOR: Always trust yourself. Treat the ones you love like they matter. First impressions hold more weight than you’d expect!

Where are the best places to go or log on to hear or buy your music?
CONNOR: You can listen/purchase our stuff at:
https://longknives.bandcamp.com
http://countyourluckystars.limitedrun.com/roster/longknives
You can also find us on itunes and Spotify.

What lies ahead in 2016 for Long Knives?
CONNOR: Right now we’re working on getting our first full length written so we can get into the studio sooner than later. That’s priority number one. We’ve got some really fun shows coming up including supporting the impeccable Slingshot Dakota on April 23rd. Hopefully we’ll be out on the road a little bit as well. Thanks for having us Audio Ammunition. Thanks for listening everybody.

Posted by Audio Ammunition at 4:19 AM

Email ThisBlogThis!Share to TwitterShare to FacebookShare to Pinterest
Labels: Bay Area, Count Your Lucky Stars Records, Emo, Long Knives, This is your Life