Pale Lips: A candy coating for the savage soul. 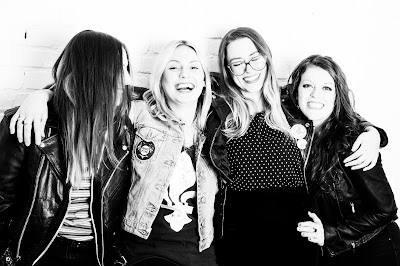 Montreal's Pale Lips play fun, hyperactive, stripped down rock 'n roll music with hints of 60's garage rock and girl groups, power pop, and late 70's punk rock.  As soon as you put it on it makes you want to dance to it at high decibels.  They just released their delightful debut EP Got A Sweet Tooth earlier this year on the famed No Front Teeth recording label with more on the way.  So make sure you floss and brush twice a day because Pale Lips are here to stay!

Let’s start out with introductions!  Who are Pale Lips and what does everyone do in the band?
Pale Lips are
Ilona Szabo - guitar
Jamie Radu - bass
Lynn Poulin - drums
Jackie Blenkarn - vocals

How did you all meet and decide to play music together?
PALE LIPS: Ilona used to play with her band Dagger Eyes, and when Lynn saw them play she knew she wanted to start a band with Ilona. Jamie was recruited by Lynn at a party after they bonded during a conversation about music. None of the three girls wanted to take on the role of lead vocals, but Ilona and Jamie were friends of Jackie, who happened to be a karaoke connoisseur...and voila! Pale Lips was born.

What band, musician or songwriter first inspired you to want to pick up and learn to play an instrument?
ILONA: The Cramps

JAMIE: Kim Deal from The Pixies and Matt Freeman from Rancid

LYNN: her brother Stevie Kicks from The Briefs, The Cute Lepers

JACKIE:  I can’t actually play any instruments, or sing really, but I’ll say Ronnie Ronette (because “Be My Baby” is a go-to karaoke song for me).

How would you describe Pale Lips “sound” to your Grandparents?
PALE LIPS: Rock and roll you can foxtrot to.

You came out with your debut EP Got a Sweet Tooth on No Front Teeth records.  Can you tell me a little about the record (where was it recorded, who helped out with it etc.) and how you hooked up with No Front Teeth in London?
PALE LIPS: We recorded at Raven Street Studios in Ottawa, Ontario with Rey Sabatin. Rey is a friend of Ilona’s who wanted some experience recording and mixing bands, so he gave us a great deal and did an excellent job with our debut EP. We had only been playing together for less than a year at that point, and we recorded five songs in two days (the three on the EP plus two others that we put up as demos on our Bandcamp), so it was definitely an interesting experience and poor Rey has the patience of a saint. No Front Teeth was suggested to us by Lynn’s brother Stevie, who had put something out on that label with his band The Cute Lepers. Once we got in touch with Marco at No Front Teeth, he was super stoked on the songs and more than happy to put the record out.

Tell me about the song “Rock n’ Roll Dipshit”.  Was it inspired by an actual person or just the idea of the typical rock n’ roll lunkhead?
PALE LIPS: Rock n Roll Dipshit was, indeed, loosely inspired by a real-life person, but the song itself is less about an individual and more about the rock and roll dipshit archetype.

There have been a lot of bands lately speaking out against their audience using their phones during their performances.  What sorts of things annoy or distract you when you’re playing?
PALE LIPS: Probably the only annoying or distracting thing is when people stand too far back from the stage. We definitely play better and have way more fun when people are really getting into it. Everybody should always move closer!

PALE LIPS: Music doesn’t have to say anything to be relevant, if it did we wouldn’t be considered relevant at all. Music can inspire any range of emotions, it can say something or nothing at all, and it just has to be enjoyable to listen to. Mostly we just want people to have fun when they’re listening to us.

What’s your favorite LP to play from start to finish and tell me about the first time you heard it, where were you and how were you introduced to it?
ILONA - King Tuff Was Dead. I was anticipating a big change in my life that didn’t end up happening.

JAMIE - Attack in Black Years (By One Thousand Fingertips). I had just gone through a breakup and was living in my friend’s apartment. I would just flip this record over and over again.

LYNN - The Monks Bad Habits. I briefly had a band way back in the day called Inner City Kitties, and my friend in the band introduced me to this record. I fell in love and still listen to it all the time, it’s one of my all-time favorites.

JACKIE - Ramones Leave Home. I first heard this album in the back of my friend’s car when I was about fifteen. We would drive around all the time listening to it on repeat. To this day it’s my favorite Ramones album, and probably my favorite album of all time. I never get sick of it and can sing it by heart.


What’s the best piece of advice you’ve read or someone told you that you still follow to this day?
ILONA - My dad always says, “watch and listen.”

JAMIE - “Why, sometimes I’ve believed as many as six impossible things before
breakfast.” A quote from Lewis Carrol’s Alice in Wonderland.

JACKIE - My mom was a Scout leader so she taught me to always be prepared. Very practical.

LYNN - My brother always tells me, “Stay in your zone, breathe and have fun.”

Where can people go or log on to hear and buy your music?
PALE LIPS: We have a Bandcamp page! https://palelips.bandcamp.com
We have sold out of our 7” entirely but digital download (and streaming) is still available. 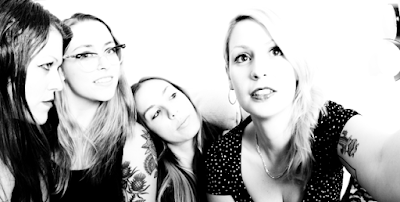 What lies ahead for Pale Lips, any more records or touring news coming up?
PALE LIPS: Our debut full length album, Wanna Be Bad, is coming out in early 2016 on Hosehead Records! Our great friend Max Desharnais from Sonic Avenues did an absolutely awesome job producing, recording and mixing the album and we are incredibly proud of how it turned out. Now we are just waiting on the vinyl so we really have no idea when the album will be ready - but it’s coming! We have no concrete plans yet, but are hoping to book some US dates and maybe a brief stint in Europe once we have the vinyl in our hands. We are playing a couple of shows with Paul Collins Beat in January in Ottawa and Montreal,  So 2016 is off to a great start and we are hoping to keep up the momentum.

Posted by Audio Ammunition at 4:56 AM

Email ThisBlogThis!Share to TwitterShare to FacebookShare to Pinterest
Labels: Cute Lepers, Got A Sweet Tooth, Montreal, No Front Teeth, Pale Lips, The Briefs, Wanna Be Bad