Like a steel toe boot to the face, here's Sick Ward! 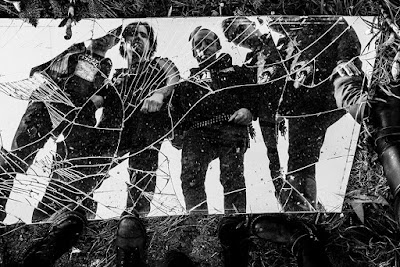 Seattle's Sick Ward are less like a band and more like a unified sonic assault team.  Their music is like a carpet bombing campaign going down your ear canals.  Heavily influenced by '82 style British Street Punk with some early Southern California Hardcore thrown in as well, these guys relentlessly pound on your ear drums until you can't tell which side is up anymore!

Let’s start off with some introductions!  Who are you guys and what do you all do in the band?
Rob: I'm Rob, I sing and occasionally write songs too.
Brandon: I play guitar.
Zach: I'm Zach and I play the drums.
Mike:  I'm on bass.

How did you all meet and decide to play music together?
ROB: We are all old friends, emphasis on the old part. We played in various bands together and decided to do a Blitz cover band for Halloween one year and called it The Warriors. We had a lot of fun and kind of formed a band out of that.

BRANDON: We've all played in various bands together over the years and after the Blitz cover set, decided to start up a band influenced by all of the punk bands that we were listening to at sixteen years old.

ZACH: These two summed it up nicely. 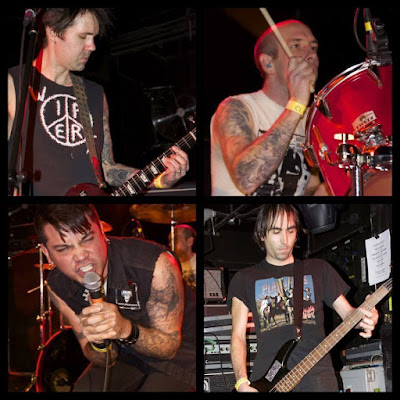 Who would you say is your main musical influence?  Can you tell me about the first time you heard them and what was it about their music you felt set them apart?
ROB: For Sick Ward, my big influences are UK '82 bands like The Underdogs, Blitz, Demob, and The Samples. I started getting into that stuff as a teenager and it really struck a different chord in me than the other more hardcore stuff I was listening to. I liked the melodic aspects of the songwriting and the more dynamic stuff singers were doing in those bands, rather than just straight up yelling.

BRANDON: My main influences for this project are the obvious UK '82 bands with a large emphasis on the Varukers, Exploited, Blitz and even a little Adolescents. Like I said earlier, these were the bands that all of us were really into as shitty teenagers. They were the epitome of punk to me at the time and they still get a lot of play on my turntable. We're not trying to be a tribute band or anything, just grabbing some influences here and there.
ZACH: UK 82 punk has always been a big influence for me. Mike and I played in a UK 82 style band together when we were teenagers, so now it's almost like we've come full circle. One of the phrases we've used at practice was "What would GBH do?" Hahaha.

MIKE:  These guys have nailed the influences.   A lot of the American HC/punk stuff I first got into way back when it seemed pretty chaotic and sounded a million miles a minute.  What set some of the UK bands apart for me was how the songs weren't necessarily any slower, but just had more of a defined composition... more room to sing along, and very powerful.

What sorts of things influence your song lyrics?  Are there any subjects you won’t write about or maybe don’t feel comfortable with?
ROB: I'm really into dystopian fiction – George Orwell, Aldous Huxley, Phillip K. Dick, and a lot of those kinds of themes make their way into my lyrics. I try not to write lyrics about things that don't apply to me or my life, and I think it's kind of cheap for bands to sing about things like war and genocide when they never experience those things first hand.

Sick Ward recently played a few shows with Denver CO’s The Nervous on their “mini” tour.  How do you think that went?   Did you feel audiences were pretty responsive to your music?
ROB: The Nervous are good buddies of ours and invited us to play a couple shows with them in Seattle and Victoria, BC. It was super fun, we ate strangely flavored chips, rode ferries, got super drunk, and went sightseeing. Oh and played shows, that was cool too.

ZACH: Those shows were great! We've been friends with the Nervous folks for a long time so it was a lot of fun to travel with your friends and play music in a different country. I feel the shows went pretty well. Being a new band it's hard to bring in people sometimes, but the people that were there were excited and that's always good to see.

MIKE:  The shows were a blast – it's always great to play with old friends in different cities, and the response was pretty great too.

Speaking of audiences, I’ve been reading a lot about bands speaking out against audience members using their phones while at shows.  What sorts of things do audience members do that distract you most when you’re playing?
ROB: I actively antagonize people if they are on their smartphones while we are playing. Most of the time I'll just sneak up next to them and swipe on their screen to embarrass them. I think it's super rude to stand in front of a band and be completely checked out to the point where you're not even watching them play. I did that to some dude in Vancouver, BC when we were playing and afterwards he came up and apologized and thought it was funny.

ZACH: I watched Rob do that and I applaud him for doing it. I find it's incredibly rude. If you aren't into the music, or just can't be away from your phone for a bands set (and our set is maybe 20-25 min tops) than go somewhere where you can zone out that isn't in the way of those trying to enjoy themselves.

BRANDON: Personally I think it's annoying as shit. People on their phones. I find it annoying in daily life let alone a live show. It's almost as bad as standing in place with your arms folded or sitting at the bar while a band is playing. The only positive to people using their phones is that once in a while you get a good live video of a performance.

MIKE:  I think the lack of anybody doing anything distracts me the most.  It's weird when everyone just stands there.  Move a little bit! 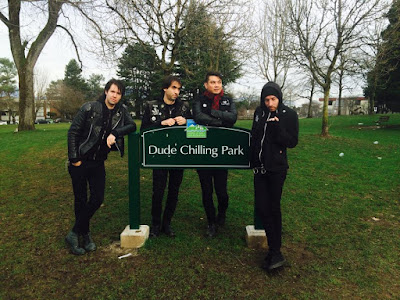 You guys are currently based in Seattle, WA.  What is it like playing shows there for a band like Sick Ward?  I know Seattle is a pretty musical town, but is there currently a descent and supportive community that gets what you guys are doing musically?
ROB: Seattle can be fickle sometimes, and response can be mixed depending on who you play for. Luckily the response to Sick Ward has been pretty positive; we are kind of an anomaly in our scene and friends seem to like what we're doing, even though we aren't playing doom metal.

ZACH: Seattle surprisingly seems to enjoy what we're doing which I can't say happens with a lot of the bands I've played in here.

BRANDON: This city obviously has a deep history of underground music but it seems to me that people are very apathetic towards punk. We don't play doom metal, have an edgy (not so) mysterious singer or draw shitty sharpie drawings of studded bracelets on our covers so we're not very cool. As far as a supportive community, there isn't much of one for what we're doing here. Let's just say I don't live here for the music scene anymore. That being said, we have had a pretty good response.

MIKE:  Overall I feel the scene here is supportive, there are just so many genres of punk and hardcore and metal and everything in between, so there is not a lot of crossover as far as crowds go.  It's very hit or miss right now.

I noticed you released the 8 song album you have available digitally on your Bandcamp page on cassette.   With major labels bogging down vinyl pressing plants and driving up the cost of records, do you feel cassettes are going to be the format of choice for many independent labels that want to put out physical releases?
ROB: Tapes are punk.

ZACH: Tapes are affordable to duplicate for bands with limited budgets. Provided someone has a cassette player (which should be mandatory in any household with a stereo) it's a cheaper alternative to an LP if someone doesn't have a lot of cash to throw down but wants some new tunes. Also, tapes are punk.

BRANDON: I feel like tapes are the most accessible format for those who prefer something physical. Vinyl is my preferred format but tapes are cheap and easy to make so I understand why they are making a comeback.  I just wish someone with a lot of money would take a chance on designing a new modern and efficient vinyl pressing machine. You'd think that would be a lucrative endeavor with all of the demand for records right now. Waiting six months for a record is horseshit. It's already old news at that point. Tapes are punk?

MIKE:  Tapes rule and will never go away!  CD's need to go away.

And speaking of the modern age, how important do you feel social media is now to promote bands, shows and records?  Do you feel like it’s a tool that helps you get the word out more efficiently or just another pain in the ass to have to deal with?
ROB: I think it depends on how you use it. A lot of bands skip social media altogether and do just fine, but I think it's nice to be able to interact with people who like your music, and to generate conversation around what you're doing. Mostly we use it to post stupid photos and videos of each other.

ZACH: I go back and forth with how I feel about social media. I think it can be a useful tool to get your tunes out there and notify people of shows and what not. Its just abused so easily and drives me nuts for the most part. I don't really want people to know what I'm doing all the time.

BRANDON: I don't personally take part in social media very much. Mainly I use it to promote bands and shows that I'm a part of. That's about all it's good for besides keeping in touch with friends that are far away.

MIKE:  It's a great way to promote bands/shows/records.., but should not be your only tool of promotion.  Always remember to flier heavily and tell your friends!

Where are the best places to go or log on to hear Sick Ward’s music?
ROB: sickward.bandcamp.com

What lies in the future for your band?  Any more touring or recording news?
ROB: I'm currently living in Berlin, Germany, and we will continue to write music long distance and record and play shows when we are all in the same town. I'd love for us to tour overseas sometime.

ZACH: Hopefully play some more shows when we're all together, post up some more stupid videos of us...

BRANDON: We're getting ready to start playing together again now that our summer tours and travels are out of the way. Stay Tuned! We'll be playing a show or two when Rob comes back from Germany.

Posted by Audio Ammunition at 4:45 AM