The Threads are taking back New York City! 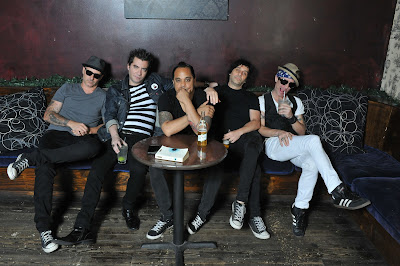 The Threads are from New York City.  Not the crisp cityscape you see behind Ryan Seacrest every New Year’s eve, but the urban grime that spawned The New York Dolls, The Ramones, and breathed life into Stiv Bators and  The Dead Boys decades ago.  A place that wasn’t so sterile, a place you had to look over your shoulder walking home at night.  Maybe the patron’s faces weren’t as surgically perfected then as they are now, people wore scowls a bit more but at least the city was real.  The metropolis lived and breathed on its own steam. This is the slice of life The Threads bring to the table with their music: hardened, honest, and  in your face Rock ‘N Roll.  If you don’t like it, go back to the suburbs!

Let’s start off with some introductions, who is currently in The Threads and what does everyone do in the band?
MICK: Lead Vocals

How did you all meet and decide to play music together?
ANDY: I met Mick years ago. I was a fan of his (and later my) band the Lower East Side
Stitches. Roger & I met when we both worked at a guitar shop. Mick & Rog started The Threads a decade ago and I weaseled my way in soon after.

ANTHONY: Been a friend of Mick’s for a while and a longtime fan of The Threads. Was fortunate enough to catch them when they needed a bassist.

CHRIS: I've known Mick for 20 years, we met at the Scrap Bar. The regular hang out for his old bands and my old bands. I met the rest of the guys when I went to go see the band play before being asked to fill in and then eventually being kept on.

ROGER: Mick came over to my apartment in 2004 for a Super Bowl party. At that point
Stitches was on a hiatus. Both of us were not doing much musically and decided to get together and jam later on in the week. We tooled around with some ideas and became really inspired by what we had accomplished in one night, so we decided to get some friends together and head into a rehearsal space and see how it sounded full throttle. It all snowballed from there.

MICK: We met drinking beer and talking shit and decided to play some music while we were doing that.

How would you describe The Threads music to someone that’s never heard your band before?
ANDY: This is never as easy question. Like, how do you describe the sky to a blind man? I guess if you do the old TV pitch line I’d say, Green Day meets The Clash with the heart of New York City.

ANTHONY: We sound like a punch in the face from a funny friend that you like but slightly suspect that they might be sleeping with your girlfriend.

ROGER: The more we do this, the harder it becomes for me to describe us. Every song writing session is completely different and drawn off of different influences. Between the five of us, we’re into everything from jazz to metal. If I had to say anything, I’d describe us as rock n’ roll with a punk edge and a New York attitude. I’m just happy that at this point in our musical adventures we haven’t succumbed to being a wedding band.

MICK: Hate this question. I would say play them a song so they could make their own judgement, but my default answer is high energy Rock n Roll with a Punk influence. 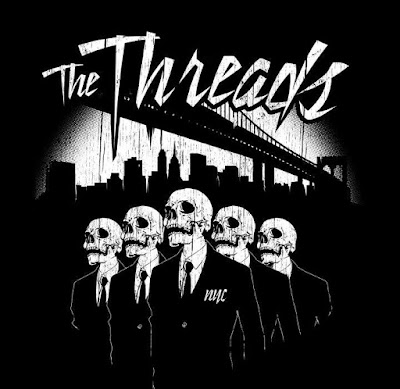 What band, musician or songwriter would you say had the most significant influence on your life and can you tell me about the first time you heard them?
ANDY: The Clash. Joe Strummer changed my life. The first time I heard London Calling was like the first time I had sex. Mind blowing and life changing and just wanting more and more of it.

ANTHONY: I studied classical piano as a child and Beethoven was one of my first hero's.
Nothing came easy to him. As far as playing bass, Geddy Lee, Paul D’Amour, Eric A,
John Entwistle and Cliff Burton are probably my top 5.

MICK: I guess Bob Dylan or the Rolling Stones. They both influence most of the bands I love. First time I listened to the Stones my oldest sister’ boyfriend gave me a cassette of Hot Rocks. I was about 8 years old.

The Threads are based in New York City. On your website’s bio you say you guys
“long for the days of the Tompskins Square Riots, squatters on every corner instead of Starbucks and no fucking bike lanes”. Can you expand a bit on that statement, do you feel there are any positive aspects about the “cleaning up” of New York City at all?
ANDY: Don’t get us wrong, the crime rate declining is great. We are not longing for the days of murder and violence. The problem is with the cleansing of the city we’ve lost its soul. Its cookie cutter, Disney Store NYC. The tradeoff has been extreme.

ANTHONY: “Cleaning up” is code for getting rid of minorities and the poor through economic gentrification. The 1% have benefited. The rest of us are fucked. The Ramones and punk and most of the great art that came out of NYC back in the day came from poverty like circumstances. NYC is now safe, less diverse and predictable. Just like the suburbs. It is simply impossible to be a young artist in this city anymore. Unless of course you’re Taylor Swift.

CHRIS: New York City was a very different animal back then. Safer than it was in the 80s yet still having neighborhoods that were very distinctive. Once you started seeing a Starbucks on every corner the next thing you knew all the bars are started to close and next all the live music venues. Artists and musicians that are young could not afford to live in the city anymore and it destroyed what was a very vibrant scene.

ROGER: I think in that statement we’re describing the musical aspects of New York City at that time. Not the necessarily the violence or crime rate. Of course the social instability did influence all the bands coming out back then. In our music we often reference those times.

MICK: I just hate that the personality disappeared and that it is no longer artist friendly. If you aren’t making six figures it’s difficult to live here, unless you have strangers living with you. 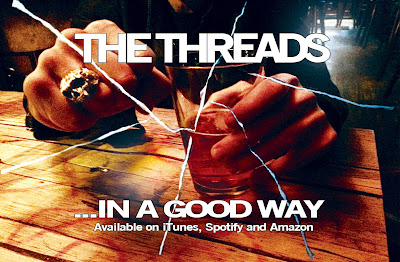 You guys released the EP …In a Good Way earlier this year. Can you tell me a bit about it, where it was recorded, who helped out with the recording etc.?
ANDY: We recorded ...In a Good Way at Seaside Lounge in South Brooklyn. It was produced with our friend Phil Palazzolo. The album title is a little inside joke we have with our buddy Jan.

ANTHONY: Yeah, Jan the Barbarian is our beer/shot guy. He lines up about 15 shots and beers on the stage in front of each of us every show.

ROGER: Phil was amazing to work with. He really brought us to a new level and we’re happy to say that our new album, still being mixed, was also done by him and even furthered the direction we were going in on ...In a Good Way.

I detect some hints of Jim Carroll Band in your music, especially on the songs
“Chump” off the new EP and the older song “East Village Boys”. Are you guys fans of his at all or am I totally off the mark here?
ANDY: I love “Catholic Boy”, so I take that as a compliment. It wasn’t on purpose though.

ANTHONY: Mandatory love for Jim Carroll as a lifelong NYer.

CHRIS: in my opinion Jim Carroll band was not anything but this quick project ....if that comparison is going to happen, I'd rather we be compared to the RAMONES for those songs.

ROGER: I hear it now that you mentioned it. Being fans, it makes sense that his influence found its way into our rehearsal room.

I love that you guys recorded a cover of The Ramones “Slug” (It’s one of my favorite Ramones songs) on the new EP. What led to the decision to record that particular song?
ANDY: We all love the Ramones. Covering “Slug” was Mick’s idea, though.

ROGER: We first did it a few years back at Webster Hall for Joey Ramone’s birthday bash and benefit. It went over well enough to put it down on tape. It’s a fun song to play.

Also on your bio it states you guys wanted to start a straight Rock & Roll band not punk, indie, or glam. With a lot of today’s youth and popular culture going so “politically correct” to a fault, do you think bands like The Threads, Biters, and Wyldlife will ever connect with kids the way honest, in your face Rock & Roll did in the past?
ANTHONY: I think “politically correct” is over simplifying it. Today’s pop music has complete tunnel vision. Everything sounds the same whether it’s a rock, country, or a pop band. And mostly because the music is written by a hand full of Swedish guys. Music is life. If you write a great catchy song it will connect. That’s what we strive for.

ROGER: Absolutely it will connect. There’s still plenty of people listening to good music, but the internet and social media makes it appear like nothing else exists but the Biebers, Beyonce’s etc…. No disrespect to them at all. You have to dig around to find bands like The Threads, Biters, Wyldlife, Heap, Big Con, Mad Juana and so on. But there still are fans of music willing to find you if you’re good. It’s like thumbing through the vinyl section in the record store years ago and stumbling upon something cool.

MICK: Probably not, but we are playing this style of music. The music that makes us happy and if people pick up on it and like it, that’s a bonus.

Where are the best places people can go or log on to hear and buy The Threads
music?
ANDY: We have 2 records available for digital download on iTunes and Amazon. You can also stream our music on Spotify and Pandora. You can buy our CDs and other junk at any of our shows.

ROGER: rdio.com has us streaming as well as google play music. Also,
www.thethreadsnyc.com 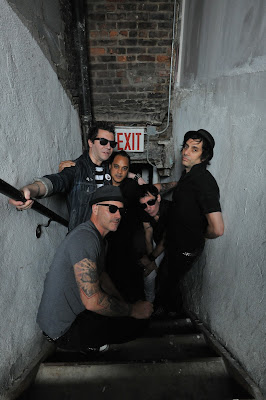 What’s in the future for the band, any recording or touring news?
ANDY: We are currently are mixing our 3rd record and we hope to have it released in December or January. And hopefully we’ll be hitting the West Coast next year.

ANTHONY: Yes. The new mixes for our next effort are sounding pretty freaking great. New songs, new sound. World domination is next.

MICK: Write more songs, drink more beer and whiskey, play some shows, and laugh and argue with one another.

Email ThisBlogThis!Share to TwitterShare to FacebookShare to Pinterest
Labels: In A Good Way, Lower East Side Stitches, New York City, The Ramones, The Threads