Get your kicks with Jeremy and The Harlequins! 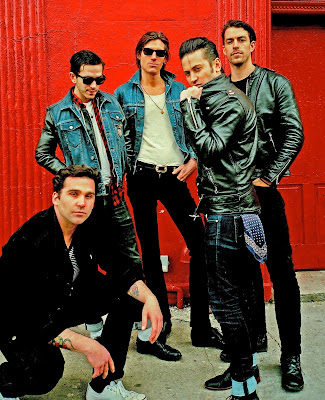 Jeremy Fury and his band The Harlequins play music that's heavily inspired by early rock n' roll. They're not a corn ball nostalgia act playing the local casino circuit though.  They're what you'd imagine the byproducts of James Dean if he had lived long enough to meet Bettie Page on a stop of the '59 Winter Dance Party Tour.  They're also very much the anxious, restless, tech savvy city dwellers of this millennium.  With so many young bands taking their cues from the psychedelic, punk and new wave era, it's refreshing to hear a new band that takes a step back even further that are also infatuated by monumental musicians like Roy Orbison, Buddy Holly, Eddie Cochran and Gene Vincent.


Let’s begin with some introductions; who is in Jeremy and The Harlequins and
what does everyone do in the band?
JF: Well, Craig Bonich is on guitar, Patrick Meyer is on the other guitar, Bobby Ever's on bass, and Stevie Fury is on the drums.  I'm Jeremy.  I sing the songs.

Tell me how you all met and decided to play music together?
JF: My brother Stevie and I have been playing music together forever, being that we're brothers and all.  We met Craig on tour in previous bands.  Some time went by and we decided we were going to make a record together.  A day before we went into pre-production we met Patrick.  He joined the band that day.  Bobby is the most recent addition and he's been playing with us for almost a year now.  We didn't really decide to play together, the universe decided for us.

What band, musician or songwriter would you say has had the most influence in your life?  Tell me a bit about the first time you heard them; where you were, who introduced you to them etc...
JF: Particularly with our band, the obvious influences are Elvis, Gene Vincent, Buddy Holly, Roy Orbison.  Coincidentally, it was all music we were raised on.  My parents played it in the car while taking me and my brother to school.  I guess we came back to it.   Besides the obvious late 50's and early 60's influences, some others would be T-Rex, Mott the Hoople, and other early 70's glam-ish rock 'n roll.  I'm also really into 50's and 60's crooner music, everything from Paul Anka to Scott Walker.

Is the current sound you guys have what you had in mind when the band first started up?
JF: Yes sir.

Tell me about your new LP American Dreamer you guys released earlier this year.  I know this might seem like a Sophie’s Choice scenario, but do you have a particular favorite song on the album?
JF: Mine change from time to time.  My favorites for the time being are “Right Out of Love”, “Trip Into the Light”, and “White Star Bright Love.”

Tell me about the title of the record “American Dreamer”.  It’s so simple yet it can mean a lot of different things if you think about it, is there a story behind that title?
JF: I think it resonates to the time we are living in.  You hear politicians today talking quite a bit right now that the American Dream is dead.  To me, now is the perfect time for the American Dream to be reborn.  We have the potential to do so much on our own now, like making a record or your own music blog, but also making your own beer, your own clothing company, etc.  If we exercise the potential of the time we are in, in a few years we will look back on the now and think this period we are in was a pivotal time in the course of America.

You guys have made a few videos for some of the songs on the new LP.  Do you guys enjoy the process of making them?  Do you have a favorite music video you remember than made an impression on you when you were a kid?
JF: Again, because the technology is available, we are more capable than ever before of making videos.  I do enjoy the process of making them and feel that having a video is just one more component of how someone may enjoy our band.

And as for the second part of the question, sadly I was one of those kids who grew up without MTV.  There used to be this station called The Box where you called in and could pay for a music video to be played.  Marilyn Manson's Dope Hat was probably the first video that impacted me, but I don't know how that translates to where I'm at now.

Your music is obviously heavily influenced by 50’s rock ‘n roll.  How did you first get into that kind of music?  Can you remember what song or record you first heard and who introduced it to you?
JF: The first song I learned how to play on guitar was “Bye, Bye Love” by The Everly Bros.  I was 7 years old.  I suppose I came around in a circle.

I was reading an interview with a former drummer for The Cramps and he commented on how guarded Lux and Ivy were with their image.  So much so that he felt they were imprisoned by it.  Do you think having an image or a “look” is something a lot of rock bands these days should pay more attention to?
JF: I think it depends on the artist as to how much they want to pay attention to their image.  It's pretty clear though every successful artist has an image no matter if it is highly curated or not.  Nirvana's image was flannel, t-shirts, and torn up jeans.  Kiss is make up and metal armor.  If you put a member of Motley Crue in Death Cab For Cutie, I am not so sure people would buy it.

What would you say is your favorite part about making music: writing, recording, or performing it?
JF: I like it all really.  There is some type of gratification in the completion of the process in all three areas of being in a band.  Even finishing a song feels good knowing that it's on it's way to the rest of the world.  Shows are the most immediate; seeing an audience immediately react to the music, but every aspect is great.

Where are the best places people can go or log on to hear your music?
JF: Head to jeremyandtheharlequins.com.  You can hear it on Soundcloud or Youtube from there.

What lies ahead in 2016 for Jeremy and The Harlequins?


JF: We will be putting out our second album, we'll be touring and we'll have some more videos coming out.  Stay tuned!

Posted by Audio Ammunition at 5:08 AM