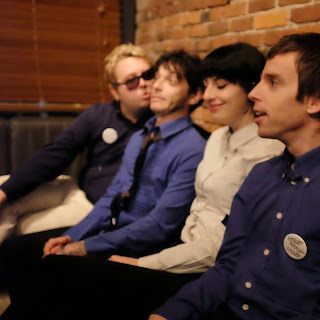 Fashionism is based in Vancouver, British Columbia and recently debuted unto the world with a three song EP on Hosehead Records earlier this year that was very well received here at the Audio Ammunition sub aquatic chateau. The band successfully combines some of the wonderful attributes of a few rock sub genres that particularly tickle our fancy: the loud guitar hooks of glam, the melodies of power pop, and the explosive energy of punk rock are all equally and brilliantly woven throughout Fashionism’s song structure. The band consists of veteran musicians from such bands as New Town Animals, The Jolts, and The Tranzmitors, but when these four particular entities come together they create a sound that’s enjoyably fresh yet pleasantly familiar. Fashionism pushes all the right buttons and presses new ones you didn’t even know you had!

Let’s start off by telling us who is all in the band, what instruments you all play in the band AND some of the other groups you’ve been in or currently in other than Fashionism:
Jacuzzi Fluzzi: I'm Jacuzzi Fluzzi and I play guitar and I sing heavenly background vocals. Jeffery sings all the lead vocals and is the band tailor. JR plucks the bass with her fingers like a real musician and sings quiet background vocals and Sweet Kokomo is the minister of partying and plays drums. We're all VERY old so we've played in lots of bands, but some of the good ones are Tranzmitors and New Town Animals. Those bands all suck in comparison, though. Obviously.

How did you all meet and decide to get a band together?
Jacuzzi Fluzzi:  Jeff and I live a stone’s throw away from each other and had talked in the past a lot about whether or not we were going to go into politics as running mates or get a band together. We opted for the road with less money and chose a name that firmly put an end to any of us pursuing a political career. Thank god. Jeff filled in the blanks with some old band mates of his and we ended up with some really fantastic people.

Paul Collins wanted to be with one back in 1979 and according to your song: “Where Have All the Rock n’ Roll Girls Gone” they’re becoming scarce in Vancouver. What is the allure of a rock n’ roll girl and what’s your theory on why they’re a dying breed?
Jacuzzi Fluzzi: We lament the fact that there aren't a lot of people that are into actual subculture. That really identify with it. There used to be so many youth cultures and most of them have been assimilated. But I do think Vancouver is getting better, actually. At least I hope so. There are so many great bands and cool scenes within punk here right now especially. It seems like things are getting pretty creative. There are still rock n’ roll girls out there, but I don't think that it's a genuine possibility to bond with a babe over a Magazine LP in Vancouver, you know? Perhaps we're getting old and grumpy, but when we play that song live it sure seems to make the girls in the room prove that they're still around. Maybe it's a challenge. 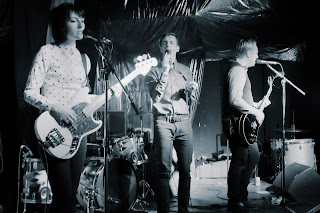 You describe your sound as “Bubblegum glam of the early 70’s played by people who like late 70’s UK punk.” I think that description is pretty spot on. Is this the sound you were going for when first starting out or did it just kind of naturally flow into that direction?
Jacuzzi Fluzzi: We initially wanted to play full-on glam rock but it quickly turned into us realizing that we were poisoned by our record collections and decades of listening to Sex Pistols and Clash LPs. We couldn't sugar it up the way it was needed to really do the genre properly so we just stopped thinking about it. We decided it was better to just take the songs that we were writing as I guess power pop/first-wave punk songs but try to think of them with the big production that would have been used on Slade or Mud records.

What sorts of things typically inspire your song lyrics?  I was reading an interview with Kim Shattuck of the Muffs and she said she stays away from politics in her lyrics because she feels nothing dates a song faster. Are there any subjects that you purposefully stay away from?
Jacuzzi Fluzzi: I have perhaps the biggest crush on Kim Shattuck possible so I'd like to agree in case she sees this, but I do think rock n’ roll is political. I hate politics, though. We don't have any real political agenda at all. I still don't think anything is off the table as far as writing goes. Jeffery is a History major. It comes out in his writing, but mostly manifests as goofy and tongue-in-cheek more than some dumb rallying cry.

Looking at pictures of you guys, your album artwork, and even your buttons and posters; you definitely have a distinct “look,” hence your band name I would guess.  Do you think more bands should start taking a little more interest in this sort of thing instead of just shuffling up on stage in t-shirts, shorts and torn up canvas shoes?
Jacuzzi Fluzzi: Y'know, fashion is fun. It's a lot of fun to play dress-up and look goofy and sharp and scummy and whatever else. I love the “don't care” (and possibly can't afford to care) look of bands like Fifteen and I also think The Jam look fuckin' smart! It's how you wear it. Just own it and don't pose. I did see one band locally here that sticks out in my mind but I can't remember what they were called. The guitar player looked like he crawled out of bed and grabbed his reverb pedal on the way to the show. He was wearing a full red sweat suit and dumb toque and he looked like an asshole. I hated him and his stupid band and I decided that if you're going to suck (and they did suck) that you at least should put some effort into what you're wearing. He certainly paid no attention to his songwriting. At least if you look great and play like you actually want to, you'll be entertaining to some degree...

And speaking of which, you just released your debut 7” on Hosehead Records. Can you tell me a bit about it and how you hooked up with the fine folks at Hosehead?
Jacuzzi Fluzzi:  Patrick from Hosehead came out to our first show and said he'd do anything to put a record out for us, which is an offer you can't refuse. Stupidly, all we asked for was for him to put out a record for us. He's got some cool bands on his label too so it's a nice fit.

With vinyl record sales being on the rise since 2006 and now cassettes making a comeback, do you think there will ever be a time when tapes and records out sell digital MP3’s or do you think this whole vinyl comeback thing is simply a fad?
Jacuzzi Fluzzi: I work in a record store – tapes still sell terribly. Records are selling well and have for years. Punk and underground cultures have floated vinyl as a mandatory format for years. It's not going anywhere; it may ebb and flow as the mainstream realizes there is a sellable format for new releases, but the underground has always kept it alive. Lookout Records in the ‘90s was HUGE, and it was one of the worst eras for records coming out on vinyl. Nearly their entire catalog came out on vinyl and they weren't small pressings, either. I don't pay attention to MP3s. 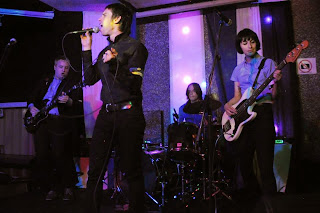 Expanding a bit more on the previous question: do you think people will realize what they’re missing from actually holding a record in their hand: album artwork, band photos, liner notes etc.?
Jacuzzi Fluzzi: Well, I hope so – it's part of the whole package of a record. There is thought and aesthetic there and not just in the songs. I don't like talking about stupid things like “branding” or some other industry garbage but I suppose it is true to a point. The artwork and attention to detail are really special to me. Nearly everything we've done has been by hand, stamping all of our sleeves, pressing our own pins, numbering and stamping our posters and silk screening/spray painting our first line of T-shirts. I think that's valuable and I hope that when someone buys something from us they see the value in that as well.

What’s the plan of attack for Fashionism in 2015: any tours or new releases?
Jacuzzi Fluzzi: We have a new single coming out on Zaxxon Records out of Montreal and we have a bunch more songs recorded as well. Get in touch as they're all doozies. We are planning some Stateside shows and some Western Canada stuff, and hope to make it out east, but right now we're writing and recording for more releases.