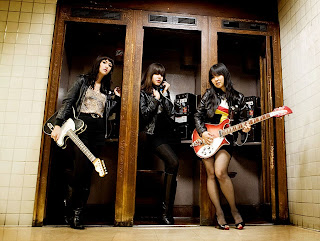 Baby Shakes is a four-piece band from the big bad city of New York. The grime and grit of urban life has not yet had any sort of cynical effect on the group’s music though.  The band’s vocals are laid on sweet as molasses accompanied with harmonies that are golden as spring daffodils. Baby Shakes music is also packed with high danceable energy that they shoot out in two to three minute concentrated blasts consisting of influences ranging from the glory days of Phil Spector and Motown to the highly energetic punk and glam of the mid to late ‘70’s. All of these ingredients are then simmered and stirred into a remedy that’s a sure cure for the curmudgeon soul.
Interview by J Castro

On your band’s bio it says you ladies are from Seattle to Atlanta to New York City.  Why did you move around so much, did you move to where the music has taken you or were there other factors in play?
Mary is from Seattle and Judy from Atlanta- we’ve lived in NY for many years. Claudia and Ryan are originally from Queens, NY. The 3 girls moved down to Atlanta for a year to record our first full length; The First One.

What band or musician inspired you to want to pick up and play an instrument?
Claudia: My Uncle Louie gave me a Ramones record.
Judy: Chron Gen, External Menace, The Boys… definitely The Ejected
Mary: My older brothers played music when I was younger so that definitely inspired me to pick up a guitar. Other than that, bands like Ramones, Clash also inspired me to play.

Baby Shakes recently had the opportunity to play a couple of shows with Irish punk legends Protex!  How did that go, were you fans of the band prior to the show?
Baby Shakes: Collectively Protex is one of our favorite bands. We’re big fans of Good Vibrations Records and the Northern Irish punk/powerpop scene. On our last European tour we actually covered “I Can Only Dream.” Protex were amazing live! They’re the coolest guys ever and we had a blast! We actually had so much fun that we may be combining forces for a short tour of Ireland later this year (wink). 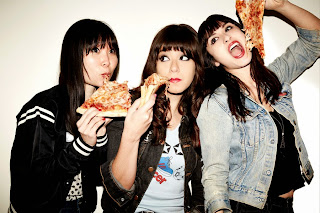 Can you tell be about the worst show you remember playing?  Maybe not necessarily because you played badly or anything but maybe because you felt out of place on a bill or the crowd was acting up?
Baby Shakes: Well our first show was at Mars Bar (a notorious NY dive bar with a sorted history), our drummer at the time had to use an upside-down ice bucket as a floor tom. Then the cops shut us down after 4 songs. It was good fun and we miss that bar, it’s been replaced by a luxury condo. Another memorable time we were asked to play a benefit for Question Mark and the Mysterians after the singer’s apartment burned down and he lost everything. Genesis P-Orridge, singer of Psychic TV tried to kick us off the stage because the show was running behind; meanwhile Paul Shaffer was in the front watching us and giving us the thumbs up, pretty hilarious.

I was reading this interview with Nick Cave and he said that out of all art forms, music has the power to change a person’s mood the fastest. What do you think?
Baby Shakes: That’s pretty accurate. When we hear Taylor Swift it makes us want to set things on fire but then you put on Slade or the Beatles and that makes us happy.

When you play a show, what do you hope to convey to your audience? What feelings or sentiments do you hope people walk away with after seeing you play live?
Baby Shakes: We just want people to have fun during our set and we want to put them in a good mood when they hear our songs. I guess playing live we want to be taken seriously as musicians. When we show up sometimes and people see that we're three girls with guitars they usually don't expect much and think it's a joke so we always try our best to blow away the skeptics and prove them wrong. We also want people to bring us tequila shots on stage. Always!!

What’s the single best piece of advice that anyone’s ever given you?
Baby Shakes: Stay free

Now we’ve come to the lightening round portion of the interview!  Feel free to answer as much or as little as you’d like!

1 What’s the first concert you attended without your parents?
Claudia: Vice Squad or Menace @CBGBs
Judy: I’m tempted to lie but I think it was some shit like Smashing Pumpkins, yikes.
Mary: Hmm very first concert without parents? I don’t remember probably some shitty battle of the bands at a school.

2 What’s the first band T-shirt that you can remember owning/wearing?
Claudia: My uncle bought me an Ozzy Osbourne T-shirt from his comeback concert. I got sent home from school that day because it said “retirement sucks" on the back.
Judy: Operation Ivy
Mary: Sex Pistols, I got it in 6th grade and still wear it ha, ha.

3 What’s the first record you bought with your own money?
Claudia: The Cars
Judy: Angry Samoans
Mary: The Stooges

4 What’s the first band poster that you put up on your childhood bedroom wall?
Baby Shakes: New Kids on the Block or maybe Menudo or Madonna. 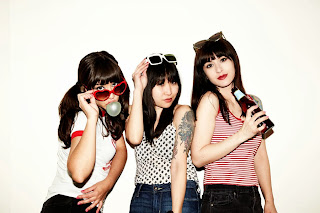 What’s coming up in the near future for Baby Shakes, any new records or tours?
Baby Shakes: We just came out with a new 45 titled She’s a Star (limited to Italian/Japanese pressing with 2 different covers) and our second full-length titled Starry Eyes will be out in July. We’re opening for Slaughter & the Dogs in Philly on July 4. We’re also touring Ireland and Europe/Scandinavia in late-Summer and then Japan in early 2016.