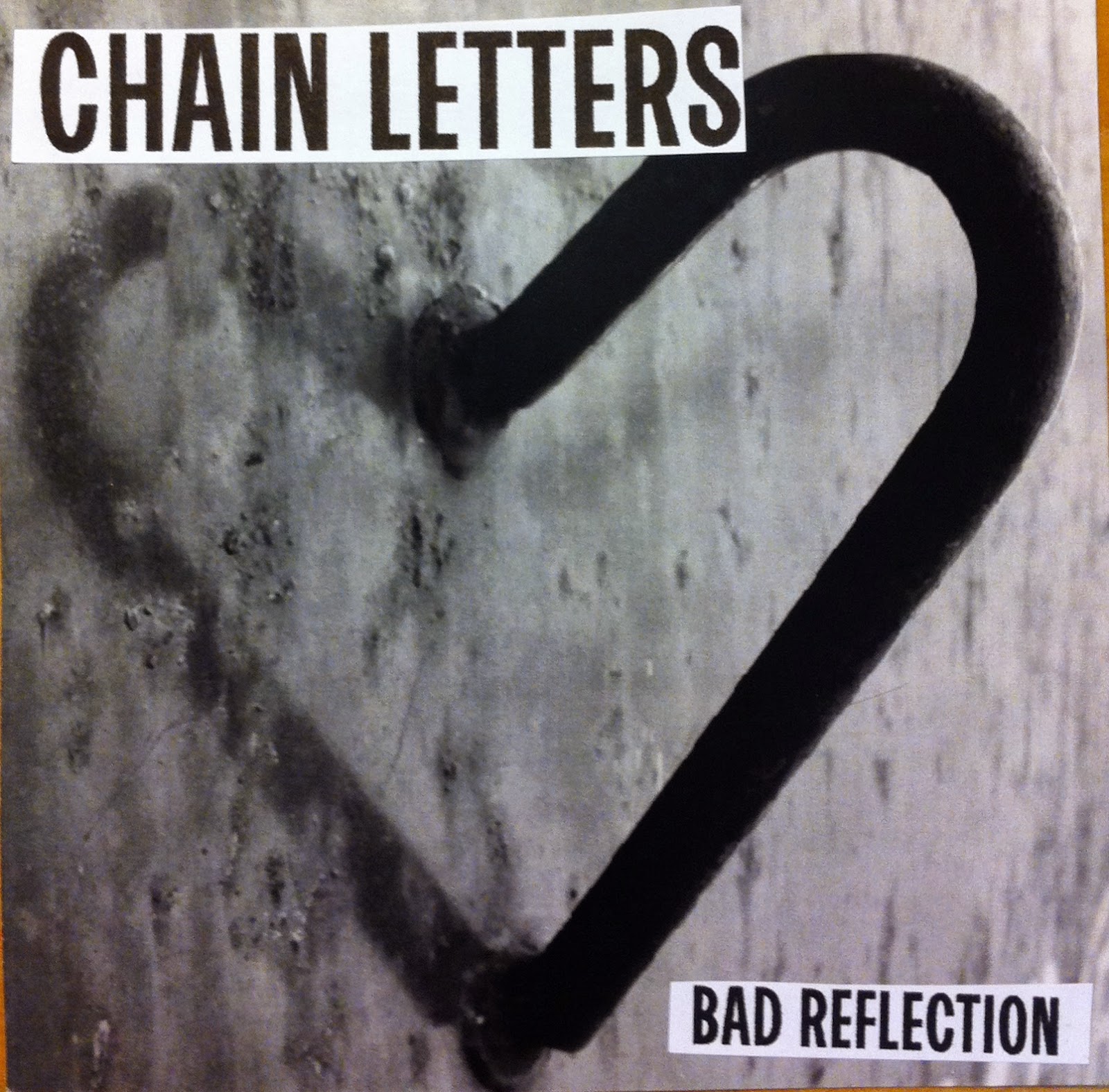 Chain Letters are really a band for the digital age. None of the members live in the same city and yet the band was still born. A few years ago, Chris Parker (guitar/songwriter) got the idea of writing songs for a band much like Darrin Raffaelli did for The Donnas while driving in his car. What happened next, other than learning guitar and writing songs simultaneously, was a demo that was sent into the stratosphere and attracted the likes of ex-members of Vice Squad and Young People With Faces. Bad Reflection, the debut single, which sounds like a mix of Avengers, Buzzcocks and Generation X was so catchy and highly praised it made fans wondering when the follow-up was coming.

Give us a brief history of Chain Letters musical background, some other bands you have played in and currently do play in?
Singer Sophia was in Young People With Faces, a punk band from Hailey, Idaho, with three high-school friends. Bass player Johnny was in first-wave Toronto punk bands Tyranna and The Wayouts. Violet has played in multiple punk bands including Vice Squad. I had never played in a band or played an instrument at all before forming the Chain Letters.

Where is Chain Letters from and how did the band start?
The thing about this band and the record we made is that, logically, it should never have happened but somehow it did. I’ve been obsessed by punk since I was eight, totally into records all my life, but I never played an instrument. I just got a crazy idea into my head one day that I wanted to make a record. I heard about Darin Raffaelli, and the way he got the Donnas to record his songs. I didn’t know he had played guitar in Supercharger, I thought he was just some random creative person with an intriguing scheme. I loved the idea that you could be a songwriter for other people, but on a totally lo-fi garage level. That really caught my imagination, so I thought I could do something similar. But then – how do you get a song across to other people if you can’t play? So I had to learn the guitar, which I did by watching people play Ramones covers on Youtube. But then the other problem – the main one – was that I didn’t know a single person who wanted to be in a band OR liked the same kind of music as me. But still – I really wanted to make a record! So once I had put a rough guitar demo together, I sent it to some people whose music I was really into, and miraculously they liked the songs and we became the Chain Letters.

Who is in the band and what instrument do they play?
Sophia Dilley – Vocals
Chris Parker – Guitar
Johnny Bubblegum – Bass
Violet X - Drums What bands did you have in mind when starting this band?
I love the Zeros, Pointed Sticks, Real Kids – all those bands that put out killer 7-inches that were raw but had really good songwriting. The Avengers blew me away when I first heard them (many years after the records first came out). The first Donnas album was important too. Part of what makes it great is, it seduces you into thinking – how hard could it be to sound like this? And I’m heavily into ‘60’s songwriters from Joe South to Ellie Greenwich.

Since the band members are pretty spread around globally (LA, Toronto, UK) how does Chain Letters get together to practice, write songs and play shows?
We have never played live. I can’t play well enough yet. When we made the record, I just put the songs out there and asked the others to do what they wanted. Luckily Violet is an amazing drummer so we had this really solid foundation for it all. And Sophia came up with some really great vocal stuff that I would never have thought of. I’ve always liked records where you get these little new elements thrown in just as the song is coming to an end – so it feels like everything is getting more intense – and you want to play it again before it’s even finished. I was really pleased with the way the vocals and drums did that on both the songs on the record. I don’t know anything about producing beyond making things louder or quieter. We just slotted it all together and what came out is what’s on the vinyl.

My favorite review is where it claims Chris wrote the songs before he even knew how to play guitar. What is the story behind this?
That’s totally true. I had a habit of making up tunes when I was driving. It was something I did without thinking about it. Sometimes I’d come up with a tune I liked so much, I’d worry about forgetting it. So the first thing I did when I got a guitar was to figure out some chords and words to go with these songs that only existed in my head. And that’s how the songs on our first 45 got written. I think everyone has certain chord sequences that they respond to more strongly than others. This is probably as obvious as saying “the sky is blue” if you are a musician but it was a revelation to me. It seemed like just about every song I had obsessed about had some variation of D-A-B minor-G and those were the chords I instinctively reached for when I started writing the Chain Letters stuff.

What are some things you like about all the digital avenues presented to musicians nowadays (Bandcamp, blogs, blog writers, Facebook, smaller record labels, internet magazines, etc.) to help bands today?  And some things you don’t like?
I don’t think there’s any downside if you’re a tiny band like us. Maybe the pre-internet era was great if you lived in a city with a great punk scene where lots of people were making records and forming bands. Most people will never get to experience that. Blogs like Mick Fletcher’s excellent Just Some Punk Songs, Josh Rutledge’s Faster and Louder, and fanzines like Ripple Rock in Finland and Kevin McGovern’s Fear and Loathing in Long Beach are great because they help build a community of people who like the same stuff. Their enthusiasm encourages music fans to pick up an instrument and start a band themselves. They reflect the scene way better than any pre-internet music magazines did.

The Bad Reflection single was highly praised in reviews, is there any plans to do a follow-up single?
We’re working on it right now.

What was the decision to release the single on the band’s own label Pogo Time? Was this the plan from the beginning or did Chain Letters shop the demo around to other labels before?
I never considered that anyone else would want to put our record out, as we had never gigged and we came out of nowhere. It was always going to be on our label. But we’d definitely consider putting a record out with other people in the future.

What’s next for Chain Letters and where can people hear the band?
Working on the next 45.

Posted by Audio Ammunition at 7:44 PM