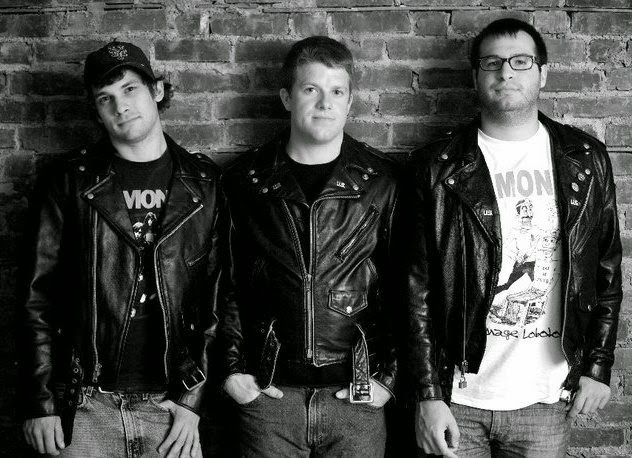 What makes a good pop punk band? Surely it’s not musical skill; The Ramones have been hounded for years over their technical simplicity and yet they remain kings. It most certainly isn’t lyrics; most pop punk bands use the simplest of words to describe everyday mundane events, love, hate and every emotion in between. What I feel makes a good pop punk band is the ability to emotionally throw yourself into your music, admitting imperfection, vulnerability, and most importantly, just have pure, unpolluted fun. Long Beach, NY’s, The New Rochelles take all of these qualities, stuff them into very loud amplifiers and blast it at you like confetti cannons. What makes most grownups so boring? Whatever it is listening to the New Rochelles will help in steering clear of it!

First off, who’s all in the band and what is everyone’s function in The New Rochelles?
RONNIE: I'm Ronnie Rochelle. I'm the singer and I play guitar.
RICKY: I’m Ricky; I play drums and sing backing vocals.
ROOKIE: I’m Rookie; I play bass.

How did you all meet and decide to play music together?
RONNIE: Ricky and I have been playing music since the dawn of time, we found Rookie on a street corner somewhere and he was eager to downstroke with us.

As kids, who or what inspired you to want to learn how to play or write music?
RONNIE: I learned how to play music just to pick up girls.
RICKY: I recorded a demo cassette at home with a childhood friend. We had no real instruments but we made a bunch of sequenced sounds and I was drawn to that. Then another friend and I wanted to start a band at age 13 as a social thing, so we bought drums and a guitar and began to play.
ROOKIE: It seemed easy enough.

You guys released a split 7” with Austria’s Dee Cracks last year on Swamp Cabbage Records. Tell me a bit about the song “Cuidado”. Was it inspired by firsthand experience?
RONNIE: “Cuidado” is inspired from a true story involving me, the US border patrol and one fine Mexican mamacita. I can't go into much detail as legal issues are still pending.

I don’t hear any politics or heavy social issues in your lyrics. Is this a conscience decision? What do you guys’ think of MRR and the punk rock political correctness police?
RONNIE: I wouldn't be able to tell you who or what is going on politically in the world.
People just write about what's on their minds. For me, pizza and other stupid shit is always on mine.
RICKY: We’re unaffiliated with MRR and the punk rock police.
ROOKIE: Politics are dumb.

When you guys aren’t playing or listening to music, what will people typically find you doing?
RONNIE: When I'm not playing music I'm usually at the beach, cracking a cold one. I also like old Nintendo games.
RICKY: Working a job and hanging out with my girlfriend. I'm easy to please. You can find me playing Game Boy and drinking beers while she watches some television show about snobby housewives or families with 38 children.
ROOKIE: You can find me watching whatever baseball game is on or picking my nose, sometimes both.

There is documented evidence that the U.S. Government has used Van Halen and Skinny Puppy to torment prisoners. If you were in charge of selecting the music to use to torture people what songs would you use? Give me your top five.
RONNIE: If you turn on top 40 radio right now for about an hour you'll hear the same 5 songs about 30 times. So, that seems pretty torturous to me. Is torturous a word?
RICKY: Allman Brothers, Grateful Dead, Lynyrd Skynyrd, Jimi Hendrix, Aerosmith.
ROOKIE: Nirvana, Sublime, Pink Floyd, Bob Marley and Led Zeppelin.

I read that out of all the art forms, music has the power to change a person’s mood the fastest. Do you agree with this? If so, are there any records you put on that will almost always ease you out of a bad day?
RONNIE: Nothing beats putting an original Ramones record on a turntable; much like prescription narcotics, its mind altering.
RICKY: Tie-dying T-shirts always does the trick for me.
ROOKIE: I only listen to the McRackins, what mood am I in?

Where can people go to hear or buy your music?
RONNIE: Ask Rookie about where to buy our music, I seriously couldn't even tell you. Do we even have stuff for sale?
RICKY: I’m sure they’ll figure it out.
ROOKIE: You can hear/buy our music including our debut 7-inch “It’s New!” and our split 7-inch with DeeCracks “The Smile Of The Tiger” at https://www.facebook.com/thenewrochelles or http://thenewrochelles1.bandcamp.com/. Coming soon our split 7-inch with Windowsill on Swamp Cabbage and Lost Youth Records and our complete discography “It’s New, Too!” on Kid Tested Records.

Posted by Audio Ammunition at 8:02 PM