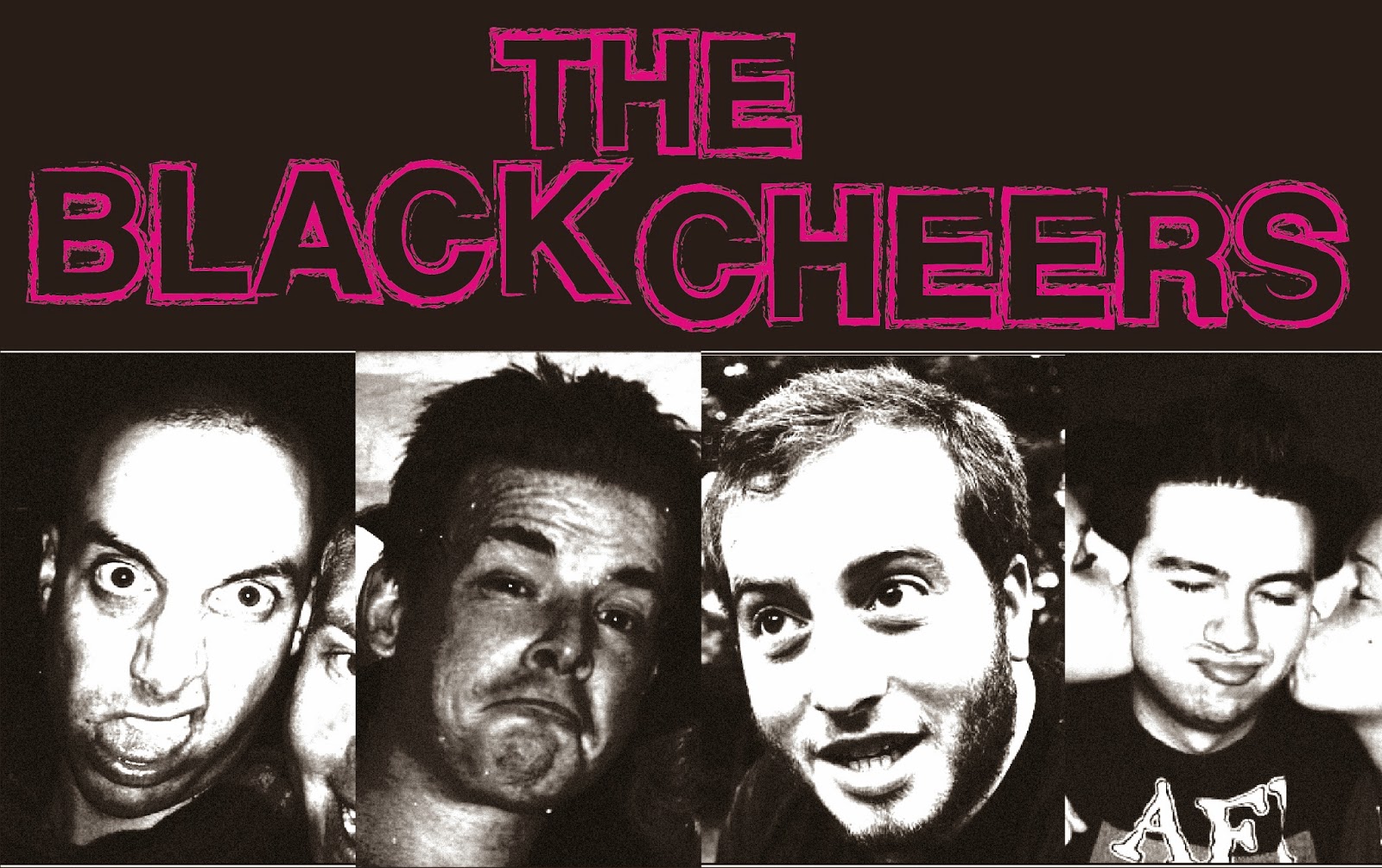 When I was trolling around on The Black Cheers Facebook page someone on there mentioned they sounded like Gary Glitter mixed with Bad Brains.  At first read I threw my head back and scoffed at how absurd that sounded, but for some reason that really stuck with me.  The more I thought about it, it wasn’t too far off the mark to describe these Boston blokes’s brand of melodic punk rock. Black Cheers hit pretty hard but don’t shy away from jabbing the melody with the left immediately following that right hook to the jaw.  Boston has a rich Rock N’ Roll history and bands like Black Cheers just keep adding to that long and distinguished list.

Please introduce yourself (or selves) and how you contribute to the Black Cheers mob?
Hey, I'm Dan and I play Guitar & sing, like a fucking ding-a-ling.
Chris plays better guitar than I do, and sings back ups (He is mostly a kind and generous man, so it's really too bad about his punchable face).
Ricky plays the bass, does backing vox, and really gets up to some good Internet hi-jinx.
Scotty plays drums, and it seems like he's always had a beard.

Where are you all from originally and how did you all meet and decide to play music together?
We are all from the Boston area. I had played in a band called the Throwaways with Chris. Come to think of it, he mentioned that we should get together and play, long before I thought of starting a band.  I've known Scotty for a while. I was in a band called Darkbuster, and he would do merch and drum tech for us on tour. (You get to learn a lot about a person when you are on tour. For instance: Scotty always vomits purple, for some reason.)
Ricky was Scotty's friend from way back. He was already famous to us by his alternate internet persona though.

First off, you gotta tell me a bit about that killer “Delete Delete” video!  Was it fun to make and whose idea was it for that Usual Suspects style ending?
This was so fun I always wanted to make a video. Sorry, I'm pasting the video liner notes, because it kinda says it all...

"This was done one Saturday with Mike Fitzgerald (sicangus@hotmail.com) directing,
Harry Pray (harryprayiv@gmail.com) shooting,
Ryan Pray and John Burke Lighting.
A lot of coffee to start.
Bad guys were: Keith from Panzerbastard, Joe from Crash and Burn, Swid from Razors in the Night and Brian from the Bread Losers.
Christian from Forn was the drunk in the hall.
Total pros all of 'em! Good, good dudes.
The beer and pizza came halfway through, but those bad guys were on something else altogether. Let me tell you something. You don't want to hear "I think its kicking in." from the guy whose about to fake hit you in the nuts with a pair of nun chucks."

Ahhh, I'm back. Anyway, that song "Delete Delete" is about deleting your browser history but which is really a metaphor for regrets and or wishing away bad memories.  So, when I came up with the idea for the vid, it was just going to be a take on an old Happy Days episode (Where the Richie and the gang takes over the bad guy band at the talent show) with the bad guys being the winners. Then, I tacked on the twist ending for the hell of it. So . . . maybe the video is also a metaphor for blaming other people, but really you can only blame yourself? I dunno, I just thought of that now. 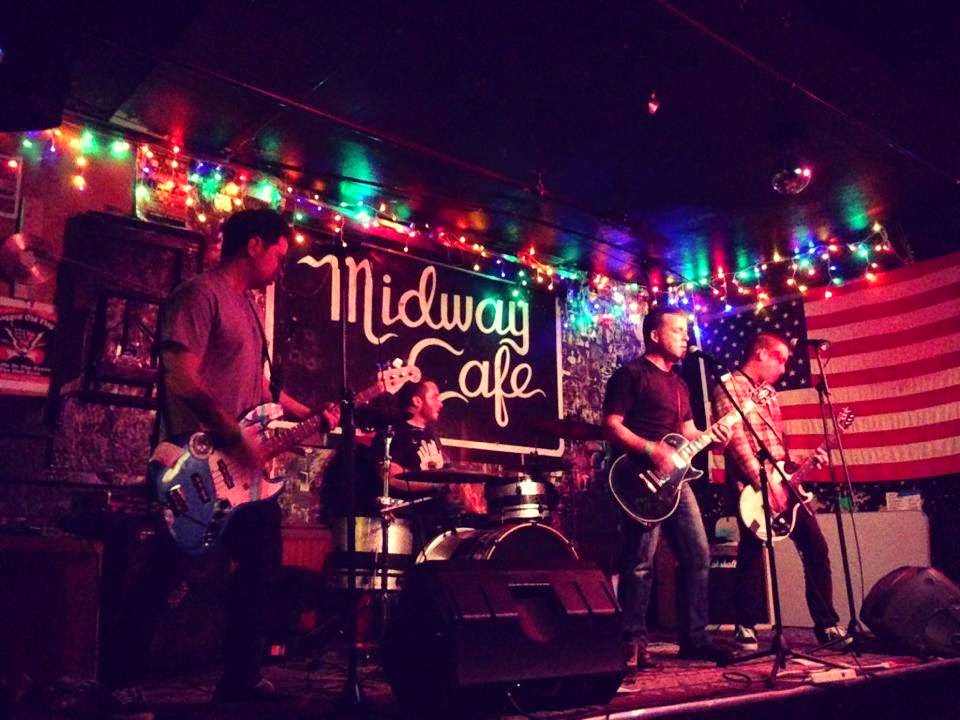 So what’s life like for a punk rock band in Boston these days?  Good turnouts at your shows etc..?
We're not really taking the world by storm. Let’s put it that way, ha ha. Sometimes, it feels like it's not even worth leaving the leper colony to go play a show.

What led to the decision to self release both of your EP’s instead of doing it through a label?  I find it hard to believe there were no takers!
Well, to tell you the truth, I didn't even try to get anyone to put them out. Putting them both up on Bandcamp was the path of least resistance/least $. Would love to get the exposure and push that a label can bring, but, you know the old saying; want in one hand and shit in the other....and see which one fills up first.

In your opinion, what bands do people need to know and understand in order to appreciate your music more?
I was kind of aiming for a Black Flag meets Rocket from the Crypt type of sound.
Maybe with some Stiff Little Fingers.

I don’t like using the term “guilty pleasure” just because I don’t think people should be ashamed by anything they really like. With that being said, do you guys listen to anything that some of your fans would be surprised by?
It was weird, I wrote to the other guys and asked "What's your guilty pleasure?" and they all responded "cuckolding." I should've been more specific. 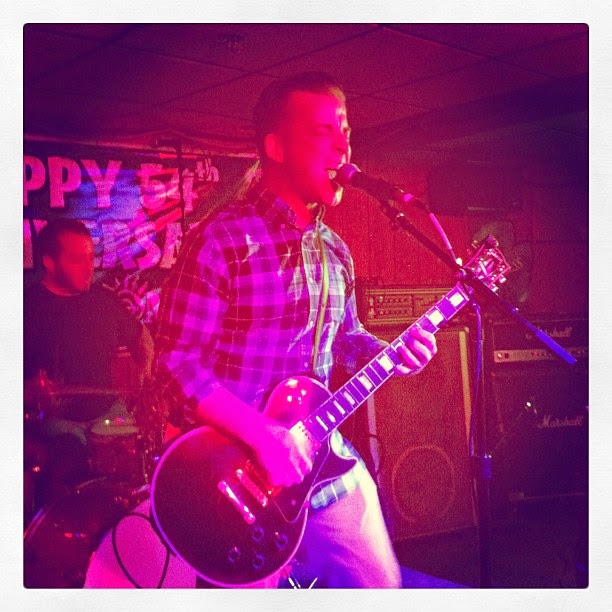 What’s been the most unforgettable show you’ve played, good or bad and what made it so memorable?
Well, we opened up for The Flatliners last spring. There were actually kids there...and they were dancing!
"You guys were the best opening band I've ever seen!" Best compliment ever, ha ha.
Plus, this was the only show (of this band) that my wife had been to. It made us look legit.

The cassette is making a raging comeback.  Do you think it’s a viable and collectable form of music or just another hipster trend that will soon go hobbling back to its dark cave of obscurity where it belongs?
It's ridiculous. I hated cassettes when they were the only game in town. I don't see any real reason for this. Although, this does sound like a pretty good trend for people that have a lot of time on their hands, and a penchant for making things more difficult for themselves.

Where are the best places for people to hear or buy your music?
We have a Bandcamp page that has both of our EP's (name your price! Yes, you can even do $0, you shitbag).

What does the band have in store for us in the near or not so near future?
Playing more shows, planning on making a hilarious video for "You Don't Get It" and hopefully recording another EP in the near future.

Posted by Audio Ammunition at 11:52 AM

Email ThisBlogThis!Share to TwitterShare to FacebookShare to Pinterest
Labels: Black Flag, Boston, Darkbuster, Delete Delete EP, Rocket From The Crypt, The Black Cheers, The Cat The Rat The Bat The Dog EP, The Humpers, The Throwaways