Sacrament's Dog Party play loud, fun, catchy Rock n' Roll similar to Nikki and The Corvettes and The Ramones used to.  Yeah there are a lot of other bands shaking a similar maraca out there, so what does this band offer that those others don't you ask?  Simply put; vigor, fire, and the uncanny ability to spin something old and make it sound invigorating again.  Because let's face it, as subversive as punk was in the 70's everyone's ridden that thrill ride already.  In a culture where soccer moms flash tattoo sleeves and Ramones T-Shirts are stretched around suburban dad beer belly's everywhere; making punk interesting again is no easy task.  I've always belonged to the school of "talent means absolutely nothing without passion to your craft".  You can fondle a fret board all you want and throw in astonishing drum fills into your 14 minute opuses but if there's no blood and gusto in your music you might as well just be standing there on a stage empty handed. One listen to Dog Party's newest record,  Vol. 4 on Asian Man Records and you'll agree they've got it where it counts.  Their songs are taut, timeless and brimming with bona fide charm.  They go out on the road with Sneeze Attack this summer (tour dates are below).  So if you are in the mood for a genuine Rock n' Roll show; don't miss 'em!


Please introduce yourselves and tell me what you two do in the band:
LUCY: Hi, I’m Lucy Giles and I sing and play drums in Dog Party!

How did you two decide to play music together?
LUCY: Gwennie and I met right when I came out of the womb (we are sisters)! It was super easy to start a band together because we lived in the same house.

GWENNIE: I’m older by two years, so when I got my first guitar and started taking lessons at age 8, a lot of teachers wouldn’t teach Lucy the drums because she was only six. Eventually family friend, Zack Goodin (who has been apart of both the Sacramento and LA music industry) came over to our house one night and set up our first band practice. That’s when Dog Party was formed. I was 11 and Lucy was 9.

Tell me about what it’s like playing shows in your town. Is there a community that you feel gets what your band is doing musically?
LUCY: Sacramento is home to tons of super talented musicians and there is a pretty good scene!

GWENNIE: Though there has been promoter/band rivalries at times, the Sacramento music scene has continued to grow as a more inclusive and loving community.

Can you remember what band or musician first inspired you to want to pick up an
instrument and learn to play and/or write music?
LUCY: When I was in preschool, I explicitly remember hearing the White Stripes for the first time and being blown away! Ever since that moment, I’ve been hooked on music.  It also helped that my father would always play the raddest bands at home and in the car.  The first time I heard the Ramones was also a very monumental moment.

GWENNIE: When I watched The Wizard of Oz as a toddler, I fell in love with singing. I knew rock ‘n’ roll was for me though when I got Green Day’s American Idiot album as a fourth grader.

In your experience, what have been some of the best and worst parts about being in a
band? Is it totally different than what you imagined as a kid?
LUCY: The best part about being in a band is playing on stage and seeing what music does to people. Seeing people jump, gyrate, and have a good time is always so rewarding

GWENNIE: Oh darn that leaves the ‘worst’ section for me. Hmmm… for me, the worst part has been all of the labeling i.e. “kid band” “girl band” and the unequal treatment we’ve received because of that.

What’s your favorite part of making music: the writing process, the recording, or
performing in front of a crowd?
LUCY: Performing is my favorite part :) Because it is always so fun! Music has this magic aspect to it– it always makes me feel great!

GWENNIE: I think I like writing it the best. I enjoy both the creative and expressive nature of songwriting.

What music do you own or listen to frequently that you feel a typical fan of yours may be surprised you enjoy?
LUCY: Right now I’ve been listening to a lot of 50’s/60’s doo wop and some old school rock’n’roll and country which differs from my normal punk driven roots :)

GWENNIE: Fans that don’t know I used to be in an electro-pop band may be surprised I enjoy/create that music too.

Never mind the critics, what in your opinion has been your band’s most shining moment so far?
LUCY: Being in SLC Punk 2 was pretty rad. Also when Iggy Pop played us on the radio!!!

GWENNIE: Well the whole reason why I picked up the guitar was because I wanted to be like Billie Joe Armstrong (Green Day), so seeing him at some of our shows and hearing his praise really means a lot to me.

Do you ever feel like underground culture meant more to past generations that had to
actually invest time and money into going to shows and record stores to discover new music as opposed to just using Google and Youtube on their phones?
LUCY: Interesting. Yes, I agree that one had to be more invested in the underground scene in past generations to discover new stuff, but as it was then and as it is now, the underground scene is a haven and community for the “misfits” who don’t gel with the norms of society.

GWENNIE: I feel like investing money into going to shows is still very prevalent. The internet has enabled more individuals to be a part of the underground culture.

What is the best way people can hear and get a hold of your music?
GWENNIE: Well we are on Spotify… but we only receive pennies from those guys (which I guess is better than nothing). To purchase digitally, all of our albums are on iTunes.  For physical copies buying from Asian Man Records or directly from us by emailing dogpartylive@gmail.com (PayPal). We also have merchandise available at all of our shows.

What lies ahead for the band in 2016?
GWENNIE: Summer tours of the USA and the release of record numba 5: ‘Til You’re Mine! 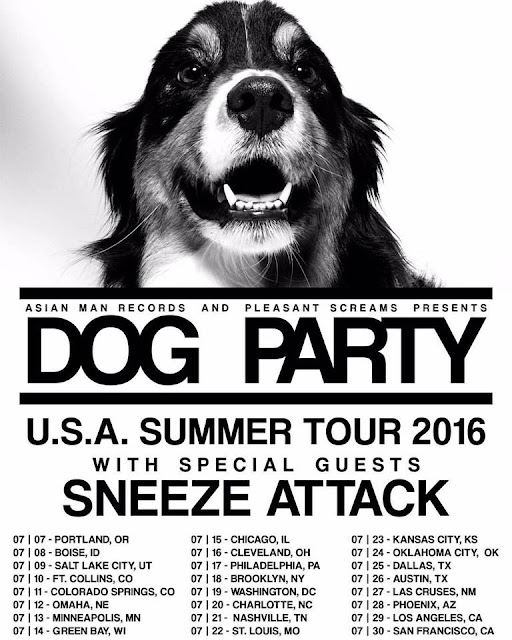 Posted by Audio Ammunition at 11:32 AM