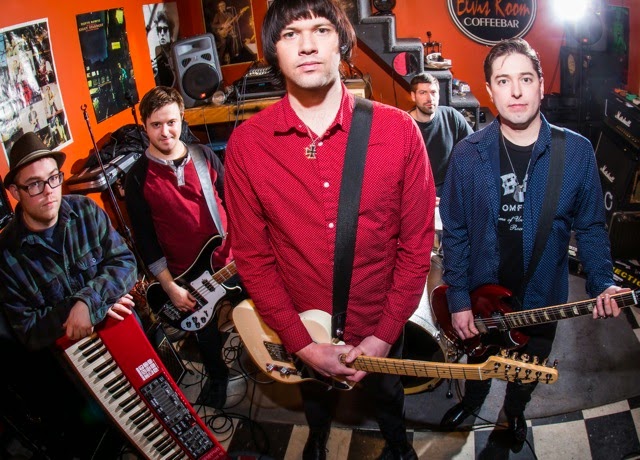 The Connection is a rock ‘n’ roll band with one foot karate kicking into the future and the other one has a black Beatle boot heel caught on the corner of the Wayback Machine.  These New Hampshire boys write songs with monster 1970’s style power-pop hooks, soaring harmonies like those mid-1960’s British Invasion bands had, and then all this is encapsulated into a Ramones rocket ship tempo. This unique sound fires down your ear canal and explodes at just the right time to produce dazzling fireworks in your brain.  You’ll be moved, you’ll be swayed, and you’ll be urged to get up and do the twist by a mysterious, unexplainable force. That’s where the name “The Connection” comes in.  Once you lay a needle on one of their records, this band makes an unbreakable bond with your soul and to quote The Borg “resistance is futile.”

What is the origin story of The Connection?  How did you guys all meet and decide to play this particular type of music together?
GEOFF: Brad and I had both played in bands around New England. Brad had a band called The Rydells and I had The Guts. Both of our bands started drifting apart as punk bands do. Brad had gone to school with my girlfriend, so even though our bands had played shows together it was really after that we started hanging out. We would go fishing or playing golf and talking music the whole time. We both love Dave Edmunds, The Chesterfield Kings, The Real Kids, The Byrds, and all of that stuff man! We wanted to start a band that was not pigeonholed into one sound. We can do a pop song and follow it up with a country song then into a Ramones tune, its all rock ‘n’ roll really. One day we said let’s start a band so we sat down and wrote our first song called “Stop Talking”. Two weeks later we recorded it along with two other original songs. We released it as a digital single. The single and video was a hit with the power pop blogs and podcasts. We later recorded five more songs and released all eight songs on a self released, one-sided 12” LP as our first album called New England’s Newest Hit Makers. We pressed 100 copies and they sold out in a few weeks. Later SP Records in Japan repressed it on CD and vinyl.

As square as this may sound, I’m a big fan of Christmas music and I was delighted that you released a couple of great Christmas singles in the last couple of years (“Rock N Roll Christmas” and “Christmas Time Again”) both on Collector’s Club Records. What led to the decision to write and record Christmas music?
GEOFF: I LOVE Christmas music too man!! Our first album New England’s Newest Hit Makers was out and doing really well but it’s always good to keep the band alive and working, so I said “let’s do a Christmas song guys!” Everybody was into the idea so we wrote “Rock n Roll Christmas” and hit the studio. It did really well too, lots of good press. Little Steven’s Underground Garage still spins it a few times every December. Now it’s just a thing we do every year. Brad and I have been working on a few new holiday songs and plan to releases all the previous singles along with a few new ones on a limited 12” LP in November of this year.

Tell us a bit about Collector’s Club Records?
GEOFF: Collectors Club Records started as a name I came up with so we would have a “label” name attached to self released albums or singles. My good buddy Kurt Baker and I have since released a few other 45’s on the label. We have released 45’s by Wyatt Funderburk, Wimpy and The Medallions, Kurt Baker Band and The Connection. I would like to someday work more on the label and release some records for bands I like. Right now, I just don’t have the time to do it right. All my attention is on The Connection or any project that I’m playing on. The next Collectors Club release will be this year’s Connection Christmas LP.

You guys recently wrapped up another European tour (your second I believe), how did it go?
GEOFF: Yes, we LOVE going to Europe. We have done two European tours as The Connection and they are a blast. We have two different labels in Europe who release our records. Rumble Records and Ghost Highway Records. We hope to do our 3rd European tour after we release our next album in early 2015. We also like playing and touring in the USA too but Europe is a little different and a great once a year rock ‘n’ roll holiday for all of us!

And speaking of playing live, you guys did a show for The Rock N’ Roll Hall of Fame/Museum earlier this year, can you tell me a little bit about that?
GEOFF: The Rock N Roll Hall Of Fame / Museum does a show every year called “It’s Only Rock N Roll” to raise money for music education. They hold the event at the Cleveland public hall. It’s the same room and stage that The Beatles and The Stones played on in the ‘60’s! It’s really amazing playing in that room. They always have a band that’s in the Rock Hall and then other big name acts. This year they wanted to have a “fresh face” of Rock N’ Roll play too. Somebody high up at the museum is a fan of The Connection and asked us to play. It was a great night. It was The Connection and Hall & Oates only for live music. It was a highlight of 2014 for us for sure!

I read that you guys met and wrote some songs with John Felice (The Real Kids), tell me about how it went and is there any chance of a collaboration record coming soon?
GEOFF: Yes! We are big Real Kids fans. We even cover a Real Kids tune on our second release Connection Collection Vol.1. We got to meet John Felice through his old drummer. It turns out that John is a fan of The Connection. He invited Brad and me over to his house in Boston to hang and we just started playing guitars. We had this old riff that we had always thought sounded like a Real Kids tune. John liked it a lot and started writing from it. The three of us finished it up right on the spot in John’s music room on all the Real Kids gear. It was pretty amazing. It’s a killer tune. We have gone down to his house a few times now and have two other songs that are half done with John. He has been really busy getting the new Real Kids album together. He’s also been pretty sick so his time is limited right now. We hope to get the other songs finished up this winter. No real plans for a release yet but we will be recording the songs someday, hopefully with John playing on them with us. Time will tell.

Speaking of collaborations you guys did an EP with Kurt Baker under the name The New Trocaderos that was brilliant! Can you tell me how that partnership came about and is there any chance we will hear more of that soon?
GEOFF: The New Trocaderos! I’m happy you like that EP. That was very fun to record. The two songs were written by Michael Chaney. Michael is a lawyer out in LA and a BIG rock ‘n’ roll fan. We became friends with him after he started writing to The Connection and Kurt Baker. He was a fan of both bands and had all of our records.
He had been sending us some demos of songs he had written over the years. We all thought the songs were great and told him that. He later asked if Brad, Kurt and I would ever work together and record a few of his songs. We all love being in the studio and really like Mike so we said YES let’s do this! It was a very fun and easy session. Kurt came down and stayed at my house in Portsmouth for a few days. The studio is just down the street from Brad’s house and a few blocks from my place. I love doing little side bands with friends. Little Steven’s Underground Garage put both songs in rotation and we even got a “Coolest Song in the World” for the song “The Kids.” Ghost Highway Records in Spain just released it on a 45 RPM red vinyl single. Mike was thrilled and we all feel very good about the whole thing. As far as doing another New Trocaderos recording: that is 100% in Mike’s hands. It’s his baby. We just bring the songs to life. I would totally get back in the studio and do more if/when he ever wants us to. The Connection plays “Money Talks” live at most of our shows. People really dig that tune!

This is the lightening round portion of the interview that I like to call “The Fantastic Four” or “Four questions that I liked and stole from other interviewers.”  Here we go:

What was the first band t-shirt you owned?
GEOFF: Ummmm, I think it was a hand me down Replacements shirt I got from John Clark of Sinkhole/The A.G’s fame! Followed closely by a homemade Dee Dee King shirt!

What was the first album you purchased with your own money?
GEOFF: Guns and Roses and Ramones Loco Live, both on Cassette.

What was the first picture/poster of a rock band/musician on your bedroom wall?
GEOFF: The Beatles

Where can people go to buy or hear The Connection’s music?
GEOFF: www.facebook.com/theconnectionrnr ,
http://the-connection.bandcamp.com  or Spotify, Itunes, Amazon, Youtube…

What’s happening with The Connection in the near future?
GEOFF:  Brad and I are about done writing the next Connection album. We are starting rehearsals and setting up studio time, looks like early 2015 for the release and the new Christmas recording for a November 2014.

Posted by Audio Ammunition at 12:43 PM