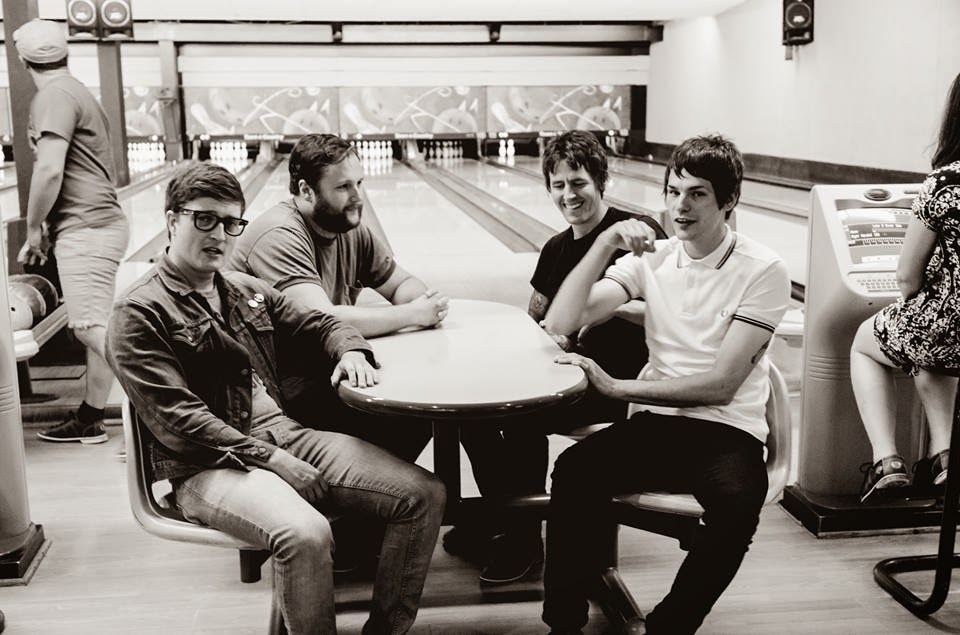 The stream of fantastic band’s coming at us from Vancouver seems to be never ending. That stream turns into more like a raging river when listening to Nervous Talk. They ride these rapids hard hanging onto a raft inflated with influences ranging from 1970’s style power pop like Cheap Trick, or even catchy pub rock like Rockpile. Throw in some 1990’s garage punk that you might have heard exploding out of Fink or Jack Oblivion’s amplifiers back in their prime and this might get a bit closer to describing their full range of sound. Nervous Talk just released their debut 7” on Mammoth Cave Recordings and it very much reflects this broad range of influence. It’s a bit hard to describe it all accurately, but once you listen to this record you’ll sink right into it just like in your favorite pair of black Converse All Stars.

Please introduce yourself (or selves) and how you contribute to the Nervous Talk Rock N' Roll machine?
J: I'm Joel and I sing and play guitar not the fancy parts.

Where are you all from originally?
J:  I'm from all over the prairies, but I spent the most time in Lethbridge, Alberta.

T: I'm from Vancouver Island. I lived on a boat for a third of each year until I was 15.

How did you all meet and start playing music together?  Are any of you in any other bands?
J: We all met each other through our previous bands. I met Shane, our bass player, when he was playing in the Hot Blood Bombers. Trevor, our drummer, was playing in a shitty band called Hazard Lights when I met him. Our bands hated each other. Todd was in Timecopz when I met him. I moved to Vancouver last year and wanted to start something new right away, so I called Todd and showed him what I'd been working on. A few weeks later, Trevor & I were playing some Spits songs for fun and I asked him to join. Shane followed soon after and here we are. Everyone, myself excluded, is in at least one other band aside from Nervous Talk. None of them are as good.

T: Joel originally asked me be a part of the new Moby Dicks lineup that he was thinking of forming. I told him I would give it a try, but a few minutes later we just decided to start a new band. I also recently joined B-Lines on bass and have been playing with them for a while.

You have a new 7” coming out soon Introductions b/w Shut It off, care to elaborate on any details about the release?
J: It's out now on Mammoth Cave Records. 3 songs. Art by Todd/Tony from Noodles//Pans.

T: Our friend Drew recorded us a couple times for free with his Tascam 1/4 inch 8 track. There was a pool table in the same basement so good times. We got hot dog stuffed crust pizza and it wasn't that bad.

Did you have a particular sound or concept in mind when starting out the band?  On the new 7” the song “Shut It Off” is a complete Rip Off Records style barnburner and “Introductions” seems like it has a bit of Power Pop or even a Glam influence.
J: The first song I wrote for Nervous Talk might have been Introductions. I'd played a lot of poppy sort of stuff in other bands, but it always had a kind of weirdo/primitive edge to it. I wanted to play classic pop kind of stuff without yelling myself hoarse about hot dogs or science. Todd's stuff has a harder, darker feel to it, much like his personality.

T: We've had a handful of songs with fairly different styles so far. I think we're still trying to find the right mix, but as long as we are liking each song for what it is we'll play it. Joel's dream has always been to have a band and its first release be called "Introductions." Do you get it? It's like an introduction to the band. He writes from deep within. My song, "Shut it Off," is based on what you'll probably want to do when you hear this single. 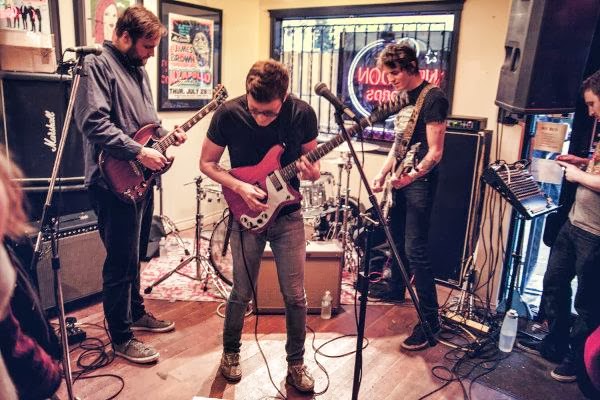 I recently read that out of all different art forms, music has the power to alter a person’s disposition the fastest.  Do you agree with this?  Do you have any favorite tunes that you can put on that will lift you out of a bad mood?
J: I think that's probably true. When I'm bummed, "Little Boy Blue" by Angel always brings me back to normal. Until I hear any of that new grunge revival shit that's happening these days then I get bummed out again by how badly it sucks and I have to listen to "Oo Oo Rudi" by Jook. Grunge revival, fuck off!!

T: I wouldn't say the kind of music I listen to be dictated by the mood I'm in. Whether I'm in a good mood or bad I just want to hear some good stuff. If I'm trying to boost my energy before Fight Club I'll throw on something like Teengenerate, Reatards, or Consumers.

You guys have only been playing together for a little over a year and I see you’ve played with some other pretty good bands and you played The Music Waste Festival in Vancouver last summer.  What has been the most memorable show the band has played so far?
J: This year's "Winter Waste" show, kind of a halfway to music waste party, sticks out in my mind as one of the funnest shows we've played. Lotta cute girls in attendance. Lotta dancing. Lotta good bands. We also played on this weird Red Bull tour bus thing at some skate contest that Andrew Reynolds was in or sponsoring or whatever. That, for me, stands as one of the most soul-sucking, regrettable shows I've ever played. Ha ha ha. But then later that day, we played a really rad show for 20-some people at our friends studio. Smaller venues lend themselves to better shows.

T: For me it was getting to open for Mark Sultan at the Astoria. I've been enjoying that guy's music for many years so to be on the same bill as him was cool. That skateboard thing was really weird. The stage was pushed off to the side of the park so it didn't really work. I do wish we hadn't of done it but I still managed to kind of enjoy how ridiculous it was.

If you guys could tour with any band/musician from times gone by, who would it be and why?
J: Well that's a toss up between Motley Crue and Led Zeppelin for obvious reasons.

I don’t like using the term “guilty pleasure” because I don’t think anyone should be made to feel ashamed of anything they like. However with that being said, what do you listen to that you think a lot of fans may be surprised by?
J: I get pretty stoked when I hear Loverboy, Saga, and Van Halen. Other than that, I just listen to the radio broadcast of the lunar landing and songs of the whales & shit. Guess that's weird.

T: I just played in a Brian Eno Halloween cover band called HalloweEno. Zero guilt attached to liking that stuff but definitely isn't much like NT.

The cassette: a viable, collectable form of music or a fleeting hipster trend that will soon hobble back into the cave of obscurity where it belongs?
J: Cassettes will at least last for a long ass time. They're possibly the most durable analog format for personal music or whatever, so I understand the appeal in that sense. I don't have a ghetto blaster or anything so I don't buy them.

T: I don't have much of a tape collection but I'm always impressed by a good one. They sound fine, I'm all for it.

What music have you unleashed on the world and where can people go to hear it or buy it?
J: Nervous Talk only has the one 7" so far. Look for it on Mammoth Cave Records' website, whatever that is. My other bands, Myelin Sheaths & Moby Dicks, put stuff out on Southpaw, Bachelor, Hozac, Handsome Dan, and Mammoth Cave Records. Guaranteed none of them are sold out. Is that what you mean or did I just make myself look like a douchebag?

T: You can hear some other stuff on our bandcamp page as well. My old band Timecopz had a split single with Fist City, also on Geographing Records. Timecopz stuff is online too.

What does the band have in store for us in the near or not so near future, any tour plans?
J: We're going to keep on writing, trying not to barf, recording, and playing for as long as we can stand it. A tour to Alberta in mid-November is in the works. There's also talk of a tour down South but I don't have any solid info on that yet so keep your ears & eyes open.

T: We'll hopefully have more of everything. We have a steady supply of new songs so that should take us a ways. Can you get us one of those grants?

Posted by Audio Ammunition at 7:30 PM