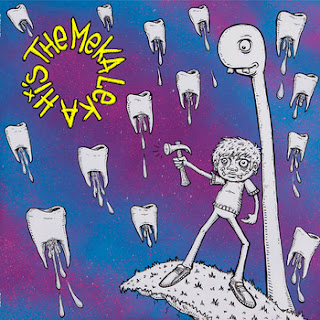 Who’s answering the questions?
Hey cool dude, this is Josh!

Where is the band from?
We are from Buena Park

Who is in the band and what instrument do they play?
Josh Grelock - guitar / lead vocals
Johnnie Magrann - bass / vocals
Loye Aubrey Jr. - drums

How did the band start?  Originally the band was a two-piece then later adding a bass player.
About 5 years ago when we first started the band it was originally called The Merkins. The line-up was me (Josh) on guitar and vocals, Rosemary on drums, and Andrew King on bass. Andrew ended up getting asked to play guitar for the Crystal Antlers, which turned us into a two- piece band. This also prompted the name change to The Meka Leka Hi’s. After being a two-piece for a couple years we asked Johnnie (a long time friend of mine) to play bass with us. Johnnie is a really good guitar player, so when he picked up the bass he wrote some rad bass lines to our songs! This really made our sound full. We recently (about six months ago) got a new drummer, Loye Aubrey Jr. The first time he jammed with us I knew instantly we found our dude! I feel like the band has never sounded better!

What bands influenced the Meka Leka Hi’s?  Dead Milkmen?
When I started the band I wanted to sound like a cross between Link Wray and The Dead Milkmen. Not sure if that’s what happened, but I’m stoked either way.

How are excited are you guys about the LP coming out?
Super excited! We did it all ourselves, except for the recording, our friend Ryan Foster (and fellow band mate in Honey Badgers) recorded us at Johnnie’s house. We recorded the vocals in my bathroom, ha ha.  This is going to be our very first release, so we decided to go big and put out a full-length album. We probably have enough material to put out two albums, but we’ll start with one.

The LP cover art looks to be a Josh R’s painting?  When your singer is an up and coming artist, there is definitely no shortage of artwork.
Yes, I did paint the album cover. I’m stoked to have my art on the record!

50 years ago people use buy music and get their water for free, now people pay for water and get their music for free. How do you think affects music in anyway?
I still buy my music from record stores; doesn’t every one else do that too?

Where can people hear the band?
Best way to find out about any upcoming Meka Leka Hi show’s is to check out our Facebook page. There is also a link to our bandcamp on there too.

What’s next?
Shows! We are ready to start playing a bunch of shows to support our album!
It would be nice to do a little west coast tour too!