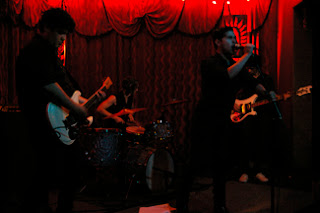 Where is the band from?
Erik: Here and there in LA county.

Who is in the band and what instrument do they play?
John Tyree on drums
Ryan Bowder on vocals
Dan Graziano on bass
Erik Fettes on guitar

50 years ago people use buy music and get their water for free, now people pay for water and get their music for free. How do you think this affects music in anyway?
Dan: Ya get what you pay for maybe 50 years ago you got a better product, i mean some of those albums had 2 or 3 hits on em now ya get one if your lucky. if its good stuff people will still buy it or support the bands in some way. Or maybe people are just cheapskates and that's why Walmart is so damn popular. Ha Ha.

How did the band start?
Dan: With me and Erik recording demos and stuff, jamming with a lot of different drummers and singers until we found Jon and Ryan and things started falling into place.

What bands did you have in mind when starting this band?
Erik: Not in particular but maybe a certain genre more or less.

When you guys are doing the songwriting, is there a deliberate intention to mix various styles from different genres?
Erik: Every song starts with a general idea when we write we get together we usually just help one another point a song in the right direction.

Do you think music can still be a vital force in such a disposable age?
Dan: It can and will be sir.

Future plans?
Erik: Records, tour, the works if we can pull it off.

Future releases are coming out when?
Dan: Our debut 7 inch will be out by October.

Posted by Audio Ammunition at 12:17 AM