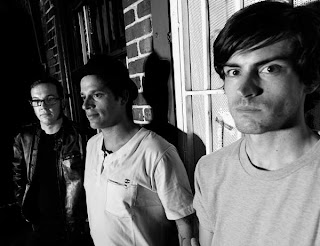 Where is the band from?
Costa Mesa, CA

What are inspirations for the lyrics?
Life and everything surrounding it. Personal bullshit.

Flat Black is pretty much a hardcore label. How did Cat Party become connected with them? Why the decision to put the LP and upcoming 7 inch with them?
They started coming to shows around the same time our LP was being recorded and said they'd do whatever we wanted. They were really adamant about releasing it and really excited. Then once the full length was out and we had Heartache on deck it just made since to go with them. Homies!

It looks like Cat Party has a little West Coast tour plan?  How excited are you guys?
Pretty damn excited. It's gonna be my vacation. We've been a band for 3 years and this is the first time were leaving for more than 3 days so it's also well over due. Can't wait.

What are some of the bands favorite bands?  I can hear Wipers and T.S.O.L. in the songs.
The Drowning Men, Earthmen and Strangers, The Estranged, JJ FAD, Cut City, Madonna, The Pains of Being Pure at Heart.

Do you think music can still be a vital force in such a disposable age?
Yes. People love music just as much as they ever did. They've just become spoiled and greedy about getting it but regardless music is a necessity for most people.

50 years ago people use to buy music and get their water for free, now people pay for water and get their music for free. How do you think this affects music in any way?
It's pretty fucked. It helps music get out there but it pisses on the people who created it.

What’s in the future for Cat Party?  Any new releases coming out soon? Etc.
We have a split coming out with Earthmen and Strangers. After that I don't know...maybe another 7" or an EP...depends on money.

Any last words?
Thanks. Bye.

Sell music on itunes at ReverbNation.com

Posted by Audio Ammunition at 10:35 PM