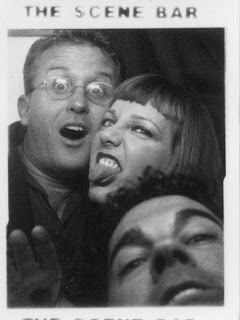 Where is the band from?
Where the debris meets the sea, by the banks of the Ohio. Near don Cordero’s Temple. Trace a line from my birthplace to my place of employment. About halfway in between. There! Right there, it is.

Who is in the band and what instrument do they play?
Jason, Kim and Mike; drums, bass and guitars. And vocals.

How did the band start?
It was an accident. I wrote some songs, and someone had to play them. The rest, as they say, is hysteria.

What bands did you have in mind when starting this band?
I didn’t mind any other bands at the time, it was more a matter of the songs and tells to tail, so to speak. You know, ballast. Or ballads.

Do you think music can still be a vital force in such a disposable age?
Yes, to the same degree that music can be a disposable force in a vital age. It all depends upon whose ox being gored. Like don’t covet they neighbors ax, buy your own friggin’ guitar. But not in a bad way. Like saving old jars, new whines for old potato skins. Better an old lemon than a new cod. You understand.

50 years ago people use buy music and get their water for free, now people pay for water and get their music for free. How do you think this affects music in anyway?
I still get my water for free, and I buy my music. I’m a throw-back, almost a thrown-away. A pig’s knuckle dragger, a chicken in a can-can. Because we know we can. And next thyme, they’ll give ME fifteen cents.

What are the song lyrics about?
They’re about the length of the song, which can be anywhere from a one minute fifteen seconds, to a clean three and a half minutes. The lyrics last about as long as the songs, you understand. We don’t do spoken word, unless we’re having a conversation. We don’t play the lyre, however, though I do have an autoharp.

When performing songs like “She’s a Piranha” and “I’m Glad I’m Not a Mollusk” would you say your tongue is permanently planted in cheek?
No, because it would difficult to sing that way. And I’m not much of a singer to begin with. She really is a piranha, and I am truly glad I’m not a mollusk. But everything else is open to debate.

How would you describe your crew of crab dancers that I’ve seen at a few shows?
Crabtastic. Crusteaceaus. Clawing their way to the top, which is really the bottom. You understand.

Shouldn’t your drummer have a snappy last name like Morrisonic or Thing too? What’s the holdup?
He is Count Cordero. He loves to count! Thing two?

On “Do The Crab,” are Mike’s faux metal yells acknowledging a secret metal collection or is it another example of over the top Thingz fun flippant vocal delivery?
Not so much metal as meddlesome. Like what is that guy doing in this song? And I would not know what to do with a metal fox, anyway. Give me a rubber chicken salad sandwich any day.

Posted by Audio Ammunition at 12:05 AM