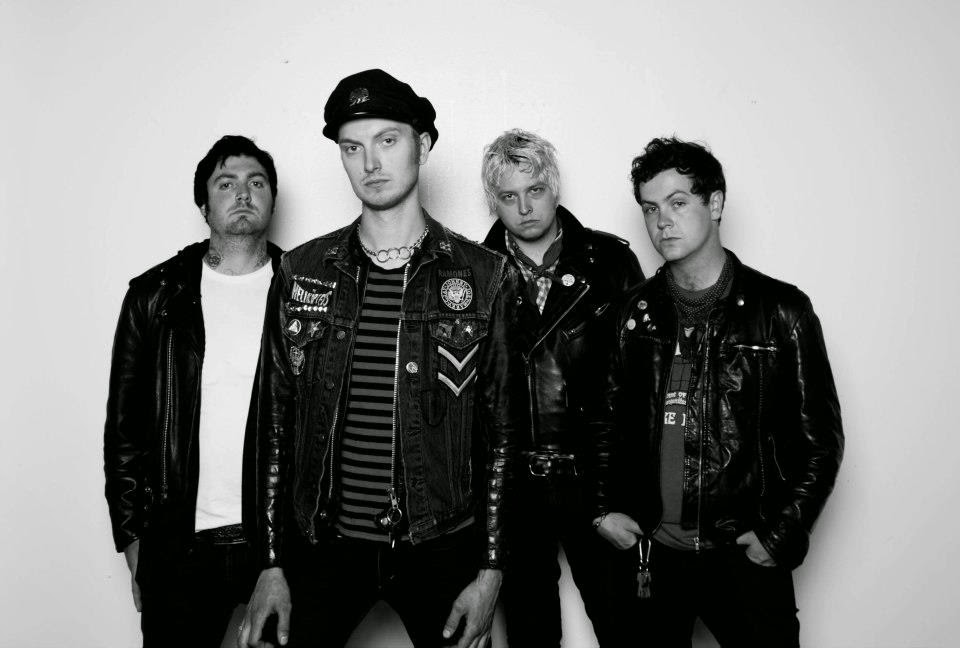 In 2008, The Jolts released their debut full length and titled it Haute Voltage. That name pretty much sums it up right there. Four guys from the town of Vancouver all in leather jackets and I’m pretty sure they all smell like dust and gasoline. These long running canucks have been doing this for ten years now and are in a similar school with bands like Jersey boys Electric Frankenstein or Swedish heroes The Hellacopters type of punk rock, heavy emphasis on the ROCK. Word on the street has it The Jolts put on quite a live performance too. It makes sense judging by the kind of force their music emits.  Guys like this aren’t usually the types that pride themselves on studio recording mastery. The Jolts are ready to release their third long player later this year and I’m pretty sure it’s going to set off Mount St. Helens again and if not then the seismic effects will be similar none the less.

Let’s begin with introductions, who’s all in The Jolts and what do you all do?
JOEY: The Jolts are Joshy Atomic on lead guitar, Evan Dabbler on bass, Matt Von Dander on drums and me, Joey Blitzkrieg, singing and playing rhythm guitar.

I see you guys have some side projects going on aside from The Jolts.  Can you tell me a bit about them?
JOEY: Joshy is playing guitar for Fashionism, a glam band/political party fronted by Jeffie from the Tranzmittors. They have a 7” that just came out on Hosehead records. Our drummer Von Dander's side project, Dead-Exes is recording demos right now. My Ramones tribute band The Ramores (which has featured all of the other Jolts members in the past) just celebrated our 15th anniversary last Halloween and will be playing more shows later this year.

You guys played Shake! Arama last year, how did that go?
JOEY: Great! Matti put on a killer festival with a diverse lineup of great bands. We were only in town for one day but still caught 8 bands. The mystery show at a tiny art space was a definite highlight. Line Traps and Shitty Neighbours blew the doors off that place. Shake! Records is doing a killer job right now, releasing tons of great punk/psych/garage stuff (including our last 7" and our albums on cassette).   We'll hopefully be on the Shake! Arama 2015 lineup this summer.

I also saw you had some gear stolen. I don’t know about you but that sort of thing always makes me lose hope for humanity. Have you recovered anything?
JOEY: We had a bad break in at our last jam space. Between all the bands that shared the room (Jolts, Vicious Cycles, Greenback High, Piggy) 17 guitars and 2 amps were stolen. The community response was incredible though and in the end between tracking some down ourselves (including Joshy's brand new SG and my Firebird) and donations from tons of people we were able to recover or replace almost every piece.

What sorts of things influence your lyrics?  Can you remember the strangest thing (person or event) that influenced you to want to write a song about?
JOEY: The lyrics are from all over the place. Pulp sci-fi/slasher flicks and video games tend to inspire me but the end result is usually about girls. "Hey Alright" from our first LP is a true story about getting kicked out of a wedding reception for smashing glasses. "TANSTAAFL" from our upcoming release is about violent revolution and inspired by Robert Heinlein's The Moon is a Harsh Mistress.

Are there any records you own that you feel some Jolts fans may be surprised are in your collection?
JOEY: I'm a big ABBA fan, with tons of their records on regular rotation at my place. ZZ Top's “Eliminator” and “Afterburner” also stay near the turntable. Joshy is a vinyl junkie so he's got all kindsa weird stuff including a growing “Exotica” collection. Matt can’t get enough of Fickle Heart by Sniff' n' the Tears and I think Evan probably has a Steel Panther download card. 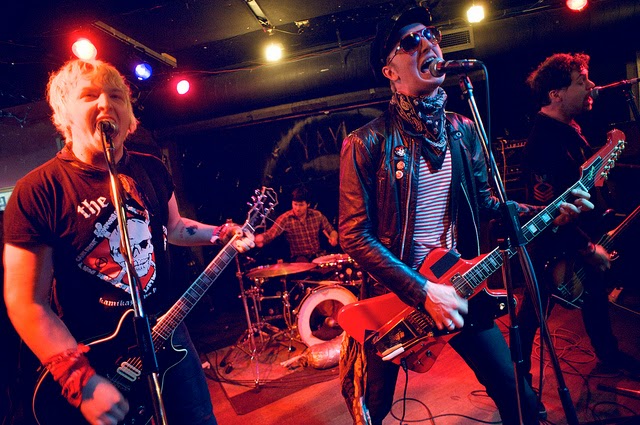 I noticed you put a link to a Guardians of The Galaxy article on your Facebook page. Are you guys fans of comic books or movies of that genera?  What have been some of your favorite and least favorite comic book adopted movies so far?
JOEY: Our song "Infinity Love" (from 8 Percent) is a love song for Lady Death from the perspective of Thanos, so I was very excited about Thanos finally entering the Marvel Movie world. I actually haven't liked too many of the comic adaptation films besides Nolan's Batman’s. G of G was pretty cool but I'd rather watch Astron-6's “Manborg” any day.

If you could pick just one person that’s been the single most influential person in your life, who would that be and why?
JOEY: Definitely Joey Ramone. The Ramones are pretty much the main reason I ever started a band and all the music I enjoy today either inspired them or was inspired by them. Hearing his voice singing those songs still thrills me today like it did as a teen in my bedroom. Even though the Jolts don't always sound like them, we try to have that '1-2-3-4' energy as our initial inspiration for any song.

I have to ask you about that Skeletor shirt design.  That has got to be one of the coolest band T-shirts I’ve ever seen! Who designed that?
JOEY: Ha! I did that up one night before a small tour, just messing around with ideas. Skeletor has always been one of my favorite cartoon characters. He just looks so bad ass.

Where can people go to hear or buy your music or merch?
JOEY: Pretty much all our music is up on our Bandcamp page and our web store has some of our current merch. Also you can always send us a message on Facebook.

What’s going on with The Jolts for 2015?
JOEY: We're just doing the finishing touches on a new record so we'll just be playing some western Canada shows and waiting for our buddies Teenage Rampage Records to put it out. It should be ready for early summer with some touring to follow.

Posted by Audio Ammunition at 11:40 PM