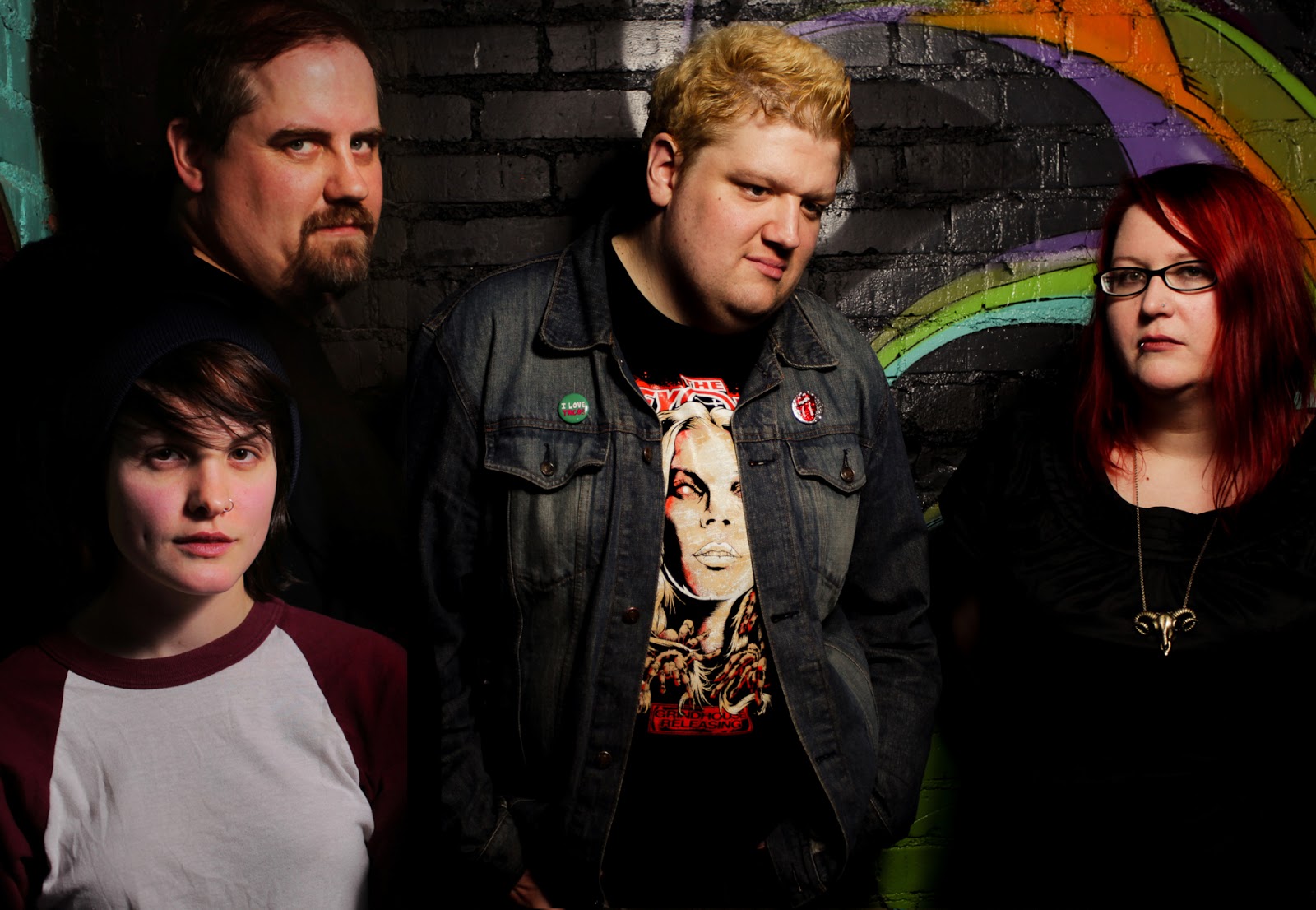 When I first started hearing about the Ills, I heard comparisons to bands like The Spoiled Brats and The No Talents. So, when I finally got a chance to hear these Iowa City monsters, they did not disappoint! Those influences are indeed there, but the Ills have taken that sound and stuck their own brand on it. It is theirs, they own it now, and lucky for us they are sharing it with the rest of us lowly dogs!

Who is in the band and what instrument do they play?
Erika Ebola - Vox
Danny Dysentery - Guitar
Molly Marburg - Bass
Tommy Tinnitus - Drums

Are you all originally from Iowa City?
None of us are. Tommy Danny and Molly are all from different areas of Iowa, Erika is from Texas and Iowa.

How did Rip Off records find their way into your hands in Iowa?
Danny: When I was a kid, Iowa City record stores carried a lot of punk and garage punk records.  I would make trips to Iowa City to go record shopping. I had heard about The Rip Offs in Maximum Rock 'n' Roll and spotted their LP at a local record shop and bought it and I loved it. When I met Erika she was into it too, and we started obsessing and collecting a lot of that kind of stuff, like the No Talents, the Drags, the Statics, the Makers, The Registrators etc.

Erika: I first heard about this stuff when I was a kid in Texas. I was kind of on the hunt for female attitude and vocals that kind of matched how I felt. I loved those classic grrrl bands from Olympia labels (like Bratmobile and Bikini Kill) and those awesome women fronted bands from the early LA scene, (X and the Bags etc.).  A friend had this Spoiled Brats song dubbed on a tape and made a joke that no one could like this, except probably me! So, it was played for me, and I instantly fell in love with it! Which lead to you know all that stuff, girl and guy, and then I ended up in Iowa.

Does the band play shows a lot in Iowa City?  Is there a scene out there that the rest of the country should know about?
Erika: We play a lot.  There are a lot of cool and different punk bands in Iowa City, but there’s not a scene of bands that sound similar.  Everyone is doing their own thing. It doesn’t really create a cohesive scene “sound” but I think that's great because that would be boring.  There are a lot of really cool bands here if your into different kinds of punk, like Lipstick Homicide, Slut River, Conetruama, NERV, Big Box, and a lot more… and they are all doing their own thing from straight up pop punk to black metal hardcore.
Also, it’s a very academic town. It has the highest percentage of the adult population holding a bachelor's degree or higher in the US, yet, it is still very small. Maybe this has an influence on how stuff end up playing out here, I dunno.

Danny: What she said.

Your newest 7” is on No Front Teeth records, how did you get involved with that label?
Erika: It’s kind of a strange circle. Jim from Rapid Pulse Records originally pointed us in their direction. They heard some demos of ours and were interested and put out our first 7”. Our new EP Get It is actually coming out as a split release between the Canadian label Shake! Records and No Front Teeth Records. We played a show with the Ketamines last year and their drummer Ryan (who is also in Fist City) helped connect us with Shake! Then, Shake! reconnected with NFT for this release.

The Ills did a pretty cool video for your song Total Dick.  Was that fun to make? Where and how did that happen?
Danny: Erika made it. We filmed it in a local junk shop owned by our friend Brian who’s a big fan of the band.  I think Erika did her part in the bathroom of our apartment.

People have compared the sound of your band to the glory days of Rip Off records and bands like The No Talents.  Bands I’m pretty sure are integral to your sound. Those are some pretty big shoes to fill!   Do you feel any pressure because of those comparisons?  Are the almighty Ills up for the challenge?
Danny: In the beginning it was kinda more of a “let’s be this kinda band”, and I still love them. Now we are not trying to be one kind of thing anymore, we’re just mixing all our influences and everything together. But those comparisons are flattering and kind, and we do love rip off records, but we’re nowhere as good as those bands!

Erika: It is flattering that we have those comparisons. They are a part of our influences. But, we would never try to or want to fill their shoes.  They are pretty fantastic at what they did and got that covered. Plus, we gotta do our own thing! I think there may have been a moment of pressure to self-edit to keep within that expectation. But that’s all self-inflicted pressure that we said, “ehh, forget about it”, to a long time ago! We have a lot of different influences and I think our music will continue to reflect that.

On your bands profile, you list your other interests as Punk Punk Punk.  Surely you have some non punk interests?  Baking, knitting, sculpting, c’mon spill the beans!
Danny: I really love Italian horror movies, film in general, pretentious art shit, coffee and rock n roll and all music really.
Erika:  I collect purses and nail polish and movies.  As a band I think we all like drinkin’.

Do you think Rock ‘N’ Roll can still be a vital and influential force for kids in such a disposable age?
Danny: I think on a massive scale, no. On an individual scale, yes. Because like there are teenage punk bands right here in my town that are exciting and inspiring... to see like 14 and15 year old kids taking the time to write songs and learn instruments and put together good bands shows that. But in the mainstream I think no, it’s time has passed. I don’t think there’s gonna be one band that's gonna come along soon that's gonna capture peoples imagination and bring rock back into the forefront. It looks like right pop is here to stay. Is there even big rock band right now? I guess I don’t know and don’t pay attention to even know.

50 years ago people used to buy music and get their water free; now people pay for water and get their music free. How do you think this affects the music industry?
Danny: I don’t know about paying for music, but they charge way too much for water here at the local grocery store. And you have to buy water because the local tap is so fucking nasty you can’t use it. I mean its 29 cents a gallon now...  as for music it’s harder to get people’s attention now, it’s not like when you had to read reviews, decide if you wanted to spend your money based on word of mouth, make a commitment and give that record a chance. Now all you have to do is go and click a button and if it doesn’t hit you on a gut level then… bam, yr done. You don’t give it any attention.

Erika:  People still buy vinyl and tapes. I don’t know much about the economics of the larger music industry and I don’t think it much affects bands like us.  But, you know because everything IS free and easy; it is disposable. It can be strangely difficult to get people to even listen to something that is free and in front of them. There’s no personal investment or connection with a band or record before hearing it. It’s “ill check that out” which translates to, I’ll listen to 10 seconds of two songs and then decide if I’m interested or writing it off entirely.

Where can people hear the band, purchase your music or buy those awesome purple Ills T-shirts!?
You can hear some of our music at sand
http://snd.sc/11Sdz2q
Our 7” Ep Get It should be out in May. It should be able available from: Shake! Records, http://www.experienceshake.com/  and NFT, http://www.nofrontteeth.co.uk/merch.html
You can get the shirts, our old 7” and our newest one (soon) at
https://sites.google.com/site/theillsrock/home/stuff

What’s next for The Ills?  Any tour plans?
Getting ready to record our 2nd album! Writing the third! We plan to hit the road soon for our EP and 1st LP that should be out on Big Neck Records this summer!