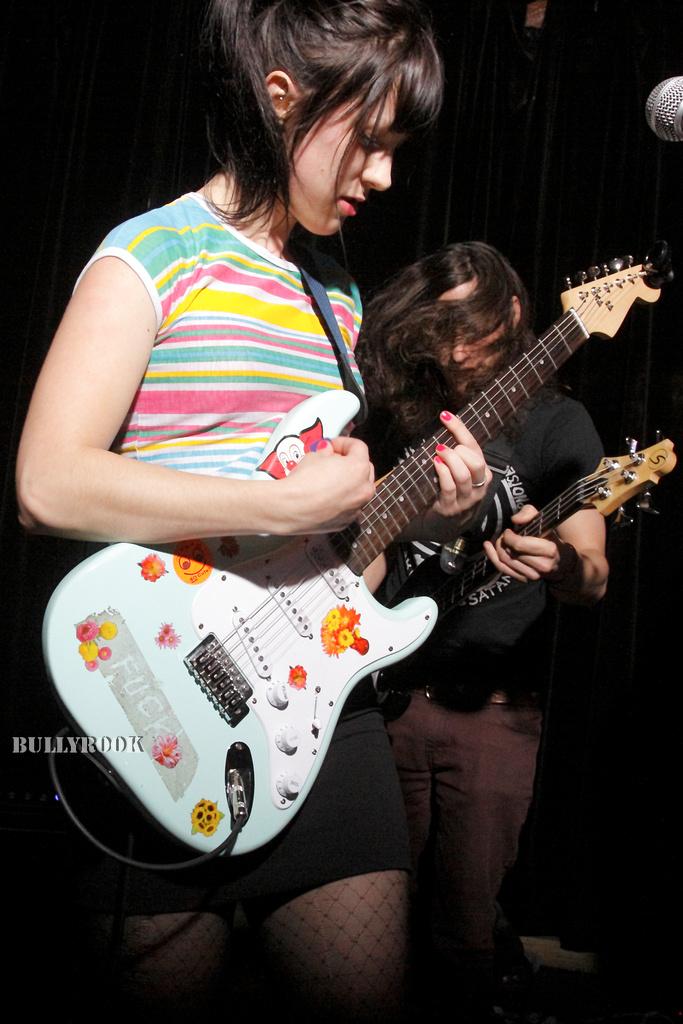 Peach Kelli Pop is the kind of sugary bubblegum pop that just might give your ears cavities, if ears could actually get cavities. If she looks familiar, that’s because Hanlon is also the drummer in the White Wires, but PKP is not a side project by any means. Hanlon is a one woman band that writes and plays every instrument herself on Peach Kelli Pop’s two LP’s, the latest being Peach Kelli Pop II, released late last year on Burger. Currently, Hanlon is busy taking Peach Kelli Pop’s lo-fi basement Shonen Knife, girl-group, garage surf sugar pop to your town as we speak opening for Kate Nash.

Where is the band from?
I, Allie Hanlon, the songwriter and only permanent band member, am from Ottawa, Canada and relocated to California last year.

Who is in the band and what instrument do they play?
I write and record everything and have different friends play with me live. The most recent tour had Wyatt Blair on bass, Mandy Mullins on guitar, Rachel Hortman on drums and I also played guitar and sang.

How did the band start?
The songwriting started before the band. Once I had recorded Peach Kelli Pop songs, I taught them to whoever was playing with me at the time.

In the about section of your Facebook Page, there is a review from Rocotober stating Peach Kelli Pop “[m]inimalist bubblegum/pre-Chysalis Blondie/Japanese cartoon pop/zero-grit sandpaper punk perfection! This White Wires side project (though this joy bop music is more of a mutiny than a side project by comparison to WW’s garage purity), PKP is more thrilling than PCP!” Do you really feel this a mutiny more than a side project? How does it feel to be more thrilling than PCP?
I don't consider either White Wires or Peach Kelli Pop a side project, they are both equal in importance and completely different from one another. It feels fantastic to be so thrilling, especially in the eyes of Roctober.

How do you meet up with Burger? Had they heard the first record? Did you send them a demo? Seems like they have a real community of bands on that label.
We were fans of each other: Me, of the label itself and of the Sean and Lee's band, Thee Makeout Party. Burger was familiar with Peach Kelli Pop and the White Wires and it was a pretty natural decision for us to work together. I think they asked me if I'd be interested in them putting out my newest album. I obliged for a bunch of reasons. I would argue that Burger is the most innovative and hardworking label going right now. They have been a pleasure to work with. They are supportive and positive and we seem to be very likeminded in our priorities.

What bands did you have in mind when starting this band?
I didn't have any bands in mind. I didn't even know that my songs would be played live when I started recording songs. I know now that I want to create songs I would want to listen to myself - ones that are catchy, satisfying and fun to see live. If I had to choose a band that inspires me, I'd say The Lovedolls, a fake band from Dave Markey films. I am inspired by different aesthetics and outlets that are associated with music - like cover art, stage shows, fashion, and attitude.

Now all the music is written and performed by you on the LP’s. So how do you choose which friends become your touring band for the upcoming tour? Is it friends who are in other bands that have downtime?
It is actually very hard to find people that have the time to go on tour, can afford to take off work, an so on.  I try and pick people who I think are talented but also who are balanced emotionally and mentally enough to be able to handle going on tour. Touring is great but also exhausting and difficult, so I try hard to find people who are laid back, positive, and don't have substance abuse issues (too badly, at least).

Do you think music can still be a vital force in such a disposable age?
I think music is vital in the way it affects people and the way it makes people feel. There is a lot of disposable music in existence currently because creating music has become so affordable and accessible (something I think is great in a lot of ways)
While there are heaploads of musical trash nowadays, there are also brilliant jewels of bands that exist; two examples being Detroit's The Go! and Conspiracy of Owls; bands that leave me in awe with their timeless sound, perfect songwriting and incredible production. Another high-quality band that constantly leaves me awestricken is Tucson's Lenguas Largas, whose music is haunting and beautiful.

How much time on the road do you spend each year?  Between Peach Kelli Pop, White Wires and drumming for other bands.
It changes all the time depending on a few things (like finances, personal life stuff, whether any new material has been released at the time) The new PKP album just came out so I am riding that wave right now. I'll do a couple more tours and then probably hold off until I am releasing something new again. Hopefully White Wires will tour a little more in the future.

How was it playing both SXSW and Burgerama this year?  Also this year PKP had a track featured in Spin Magazine as part of Burger’s upcoming releases with a picture of PKP. What are your thoughts regarding that?
We actually only played Burgermania (Burger's showcase at SXSW) this year. It was probably my favorite show of our month-long tour. A lot of my friends and people that I admire were in attendance, I thought we played well and the crowd was very enthusiastic.
While nothing ever seems to come from writes ups like the one in Spin, I appreciate any publicity that might expose Peach Kelli Pop to someone new.

Does living in both the US and Canada affect your songwriting at all?
I have lived full-time in the USA for a year now. Moving to California from Ontario, Canada has probably affected my songwriting since I am generally happier and more inspired here.

50 years ago people used to buy music and get their water for free, now people pay for water and get their music for free. How do you think this affects music in any way?
I don't really think about that kind of thing too much. 50 years ago I wouldn't have been able to create music the way I have now.

Where can people hear the band?
You can go to our bandcamp site or see us play live.

What’s next?
We are doing a West Coast USA tour with UK's Kate Nash this May and playing 1-2-3-4 Go!s fest,
the Go!Go! Fest. Check out my blog for more details: peachkelli.blogspot.com