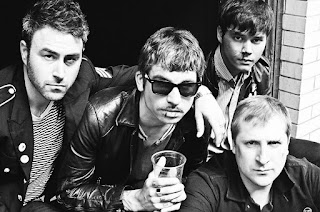 The Gentlemen punks are back with their new LP, Dead Dance Club, and it’s available for all the bored and thirsty ears. If you’ve read this blog, you’ll realize the Maniac is no stranger to its digital pages for good reason. These CA natives/Pacific Northwest transplants have taken their brand of Briefs meets Dickies meets Weirdos into the sordid LA back alleys and made something entirely catchy and memorable. Listen up, turn on your ears and you shall not be disappointed.

Who is answering the questions?
This is Justin Maurer, guitar and vocals
Who is in the band and what instrument do they play?
Zache Davis - bass, vocals
Andrew Zappin - lead guitar
James Carman - drums, vocals
Justin Maurer - guitar, vocals
Give us the band’s origin story, some other bands the members have played in and currently do play in?
Me and Zache played in bands in the Pacific Northwest in the early ‘00’s. Zache played in The Girls and Cute Lepers from Seattle. I played in Clorox Girls and Red Dons in Portland. Maniac was born in L.A. in 2012. Zache and Andrew worked in West Hollywood at a fetish shop, which is how they met one another. Ardavon Fatehi was the store manager.

Ardy played in Portland, Oregon’s Goons of Destruction and went to high school with the Exploding Hearts guys. He’s currently working on a documentary about them. Ardy was extremely busy working as a gaffer on some adult movies in the Valley, and I ended up replacing him as the rhythm guitarist.

Maniac’s original drummer Richie Cardenas played in Plastic Letters, Clorox Girls, Rough Kids, and Neighborhood Brats. James Carman from Images and LA Drugz replaced him. We’ve had this current lineup since about 2013. Fortunately, Ardavon stuck to filmmaking and DJing underground fetish parties. He’s also DJing our record release party this Saturday. Richie now works as a mechanic at the Post Office and is a rabid LAFC fan. Final note, Andrew officiated Richie's wedding as the padre, and I interpreted the ceremony in Spanish. Padre Zappin and I were a pretty damn good 1-2 punch so if anyone wants a wedding in English and Spanish, I still have the script in the trunk of my Honda Civic. Maniac is also available for weddings, bat mitzvahs, and quinceaneras. 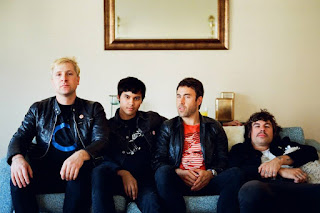 Describe the band’s sound in 20 words or less.
Cheap Trick and Wire meet all of our previous bands in a bar. David Lee Roth shows up with his entourage. We all have a wild night on the town spearheaded by Diamond Dave.  The night becomes a 3 day bender that is part feminist snuff film, part homoerotic fever dream set in the industrial wastelands of Los Angeles. We purgatory our torsos night after night with dreams, drugs, alcohol, cock, and endless balls. Sorry, I think that was over 20 words.

Some bands have a musical game plan when starting. For example, we want to sound like Buzzcocks meets The Jam. Did Maniac have any plan ahead of the time or did you just starting writing songs?
We all bring our own individual influences as ingredients into the Maniac kitchen and then prepare an exquisite hearty meal.
A lot of interviews, I have read have made note of the band having four songwriters. Sure, the band will never run out of song ideas, but how do you decide which writer’s songs get on the LP?
The best songs make the cut! 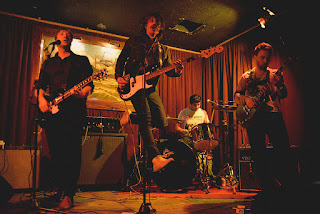 To piggyback of the last question, I think one of the secret weapons of Maniac is that the band has the three vocalists. It’s kind of like The Boys or a punk rock Beatles. On “City Lights” this multi-vocal attack works great. How do you figure who sings which songs? Or is it “I wrote it, I’ll sing lead and everyone joins in during the chorus.”
The second thing you said! Although it’s important to note that Andrew comes up with a lot of the original riffs too, and he only sings in the shower.
Why the decision to re-record some of the previously released songs like “Midnight Kino,” “Calamine” and “Precision Accuracy?”
Because after we played those songs on tour in the US, Canada, and Europe they sounded a lot tighter and tougher.
Maniac has been described as quintessentially a Los Angeles band. How do you feel about this considering LA is the adopted home of half of the members?  Before moving to California, did you have any preconceived ideas about the people or the state?
¾ of Maniac were born in California. Andrew was born in Ohio but has lived in CA for about 20 years. I think people perceive Zache and I as being “from” the Pacific Northwest because we both lived there and started our music “careers” up there, but Zache was born in Oakland, me in LA, James in Carson. I moved to the northwest when I was 11. Moving back to LA 9 years ago was a trip, it was interesting to get a completely fresh perspective on the place as well as connect the dots on this massive sprawling map and how they related to the ghosts of my childhood.

Maniac is a friend to many labels. The band has worked with La-Ti-Da, Modern Action and No Front Teeth. At this point, do labels come to you with offers or does the band still send out new songs to labels?  How did you get together with Dirt Cult and Hovercraft?
We had to shop our stuff around. It’s real hard as most independent labels have their next 1-2 years of releases already committed. “Dead Dance Club” is a split release with Dirt Cult and Hovercraft. Our friends who play in the Portland band Piss Test had some really positive things to say about Chris at Dirt Cult and they were right. Clorox Girls and LA Drugz both worked with Tim and Mark at Hovercraft in the past, hopefully we have a winning combo! It’s fantastic to have both Chris and Tim in our court.
With a zillion digital avenues presented to musicians nowadays (Bandcamp, blogs, Spotify, YouTube, etc.) what do you feel are the best parts and worst parts of these digital avenues?
The best part is that people from around the world can hear your music. The worst part is over saturation. People don’t have much of an attention span these days and it’s very hard to get people to check out your music or get excited about your message. It's ironic because new music is easier to listen to than ever, but it's much harder to get people to take the time to listen.
There is a little trend going on with bands opting to hire a PR agency and self-release their songs through Bandcamp instead of sending songs to labels in hopes of a release. Some bands have had some success using this method, which have led to proper re-releases by labels. Maniac seems to operate in a more traditional method of label release, play live, tour. Can you talk about the reasons to stick to the more traditional method?
Hiring a PR is usually prohibitively expensive, so more power to the bands that can afford to hire one. It’s generally a solid investment, but like I said in the last question, the over saturation of underwhelming Internet bands these days is completely overwhelming. Every online music publication receives a gazillion emails per day from not only PR’s, but the bands themselves, labels, etc.. A lot of press coverage seems like it’s done as a favor, mutual back scratching. That’s how the world works!

More power to any band who has any success using any method! I think 95% of bands lose money, about 4% break even, and 1% or less actually make any money. The poverty line in the US is about $12K per year. For a band of 4 to break even and pay each member in their band a poverty line wage, they'd have to make $48K as a band per year after expenses. That is a pipe dream by far for most people. I personally lived under the poverty line as a touring musician for many years.

As far as the traditional approach: write a song, rehearse, play live locally, record in a studio, label release, then tour, We’re following in the tradition of our grandfathers. From Black Flag, Minutemen, and X touring in a Ford Econoline, to Sam The Sham and the Pharaohs touring in a hearse, to Van Halen playing backyard house parties in Pasadena. I know I’m getting long-winded here, but a band is like a political campaign, in order to get people excited about your message, you have to go to their town. Some politicians put millions of their own dollars into their campaigns and unfortunately substantially more impoverished musicians do the same. That’s why a lot of touring bands coincidentally happen to be trust fund kids. Maniac pays for our touring by working like 10 jobs between 4 guys. This band could be your life, but be glad that it’s not!
How has touring shaped the band’s view?
This is a pretty vague question! :-) Touring is hard on the body and mind and expensive, but it’s usually fun, especially international touring! It'll knock a few years off of your life, but at least you'll have some stories to tell.
What are some of the best places/best shows the band has played?
Germany, Spain, and Canada I’d say are the highlights of Maniac’s tours so far. 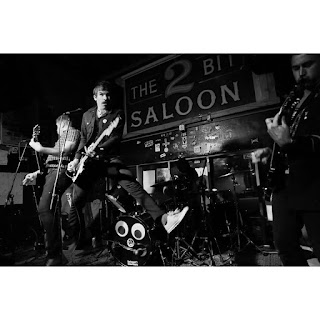 (photo by Niffer Calderwood)
When not playing music, what does the band like to do?
Eat, Drink, and be merry! Wine, women, and song! Andrew is a photographer, filmmaker and writer. Zache has studied lots of languages and is a fan of the Dodgers and Raiders. James and I both like playing pick-up basketball. A bunch of us are going to go see LAFC on Wednesday. LAFC games are a bunch of inmates running the asylum. I think it’s fair to say that we all are fascinated with women and their mysterious ways. James digs the ganja and recently has been engineering some bands in his home studio called IMG HQ AKA Carson Drift Studios. I’m a sign language interpreter, dig Latin languages, classic film, and all of the fucking amazing food you can find in LA… just watch the Jonathan Gold documentary “City Of Gold” and it will make you want to try every hole-in the wall restaurant in LA.
Where can people hear the band?
In a shitty bar, in your car, at home, on your phone, on your laptop, on Spotify, Bandcamp, on Jonesey’s Jukebox, Henry Rollins’ radio show, in a Carl’s Jr. Superbowl commercial, on endless loop in Urban Outfitters, and on your analog record player.


What’s next for Maniac?
We’re going on a west coast tour later this month, maybe an east coast tour in the fall. Probably Europe next year, hopefully Japan and Australia sometime in the near future! Also, our brand new tunes are sounding pretty bitchin’!  We’ll probably record ‘em at some point. Our demos at Carson Drift Studios sound killer so far.

Thank you very much Ed and Audio Ammunition, and thank you for reading! Be excellent to each other!