The party never stops with 48 Thrills! 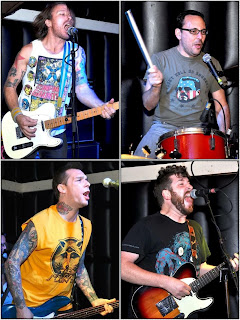 Portland Oregon's 48 Thrills play honest, hard hitting punk rock with ferociously entrapping hooks . It's fun, it's loud, and it's unpretentious.  It's  music that reminds me of the bands that first drew me into DIY punk rock in the first place and it reminds me of why I still continue to love it decades later.  Call it "pop" punk, "melodic" punk whatever, but the word "great" better be in there somewhere!

So let’s start out with some introductions, who is currently in 48 Thrills and what does everyone do in the band?
Jimmy plays bass and grunts.
Ken plays drums and hits all the high notes.
Davey is the new guy playing lead guitar and sings as much as I can get him to (which is a lot).
I am Josh and I jangle the rhythm guitar and sing to the best of my abilities.

What band or musician made you want to pick up an instrument and learn to play/write music?
JOSH: I originally played bass and just thought it would be cool to play in a band, for whatever reason my bass guitar hero was Johnny Personality from The Vindictives, that dude was great and sang all kinds of backup vocals which I loved. When I swapped to a 6 string I'd say that Paul Weller and Joe Strummer were people I think I try to emulate.

How would you describe your music to your music to someone that’s never heard your band before?
JOSH: High energy, sweaty, sing-a-long fun.

One of the first things that really stood out to me about your music was your lyrics.  There are only a few active melodic punk band that I’ve heard that still impress me with their lyrics (Moral Crux and M.O.T.O. immediately come to mind).  Can you tell me about one of the most unlikely person or event that inspired you to want to commemorate to song?
JOSH: Most of the lyrics I've written have been about the usual suspects (ie: work/ex's/crushes). I have given a go at a few political songs but I always feel like I am not articulating my point well or come off not knowing what I'm talking about. So my answer is probably my dog that passed a few years ago. It probably took me 2 years to finish it, I never thought I would write a song about a dog but he was the best.

You guys are based in Portland Oregon is that correct?  With so much going on there musically, do things ever get competitive with other bands?

JOSH: You are constantly playing the same nights as other buddy bands that are playing other venues, just sorta is how it is.

What sort of feelings or sentiments do you hope your audience walks away with after seeing a 48 Thrills performance?
JOSH: That we were fun and didn't suck.

I’ve heard people say that playing/writing music has been therapeutic to them.  Have you ever found this to be true in your own lives?
JOSH: Definitely. I feel like I have written some of my best songs while angry haha.

This is the part of the interview that I call “Four Questions I Shamelessly Stole From Other Interviewers.” Feel free to elaborate as much or as little as you wish:

(1. What was the first concert you ever attended without your parents?
JOSH: When I was in high school over 20 years ago I saw Sprung Monkey and Unwritten Law at a Scottish Rite Center in San Diego

(2. What was the first band t-shirt that you can remember owning?
JOSH: Iron Maiden

(3. What’s the first album you remember picking out yourself?
JOSH: Michael Jackson Thriller

(4. What was the first band poster that hung on your bedroom wall?
JOSH: Iron Maiden

Where are the best places to go or log on to hear and buy 48 Thrills music?
JOSH:  All of our stuff can be downloaded/streamed/purchased at 48thrills.bandcamp.com

What’s coming up for you guys in the near future?


JOSH: We are going to record a couple songs for a 7" and film a video for one of them in a few weeks which will be a first for us.


Posted by Audio Ammunition at 5:02 AM