Golden Handcuffs play Rock N' Roll with a fantastic blend of Glam, Punk, and Power Pop peppered throughout their songs.   The band recently took some time to answer some questions for us about their influences, their hometown of Portland Oregon and the friendly competition within their scene.

Let’s start off by telling me who is currently in Golden Handcuffs and what everyone does in the band:
-Russ London: Guitar/Vocals/Lyrics
-Lucas Schmit: Bass/Backing Vocals
-Keagan O’Brien: Drums

How did you all meet and decide to play music together?
RL:  We got together through musician-wanted ads about 3 years ago. I remember Keagan showed up to that first practice with just this old marching drum, a snare, floor tom and maybe a ride. I wasn’t really sure how it was going to work but those first practices we played the trashiest 2-chord shit. It was great.

LS: We hit it off right away. A genuine interest in gross old cartoons, The Cramps, and conspiracy theories.

KO: Yes I remember Russ looking like a stoner version of Jimmy Fallon and recognizing Lucas from a couple local shows.

You guys just changed your name from Sharks from Mars, a name you’ve gone by for a few years now, to Golden Handcuffs.  Why the name change?
RL: Yeah we needed to shake things up and go a different route. All those hours spent in the van smelling rotten feet and half drank and long-expired milkshakes had us pretty delirious when we were thinking of names on tour. I’m pretty sure we were in weird places in our heads whenever we hashed out that name. I can’t speak for the guys on this, but about half way to Las Vegas a mix of terrible cocktails, no sleep, and Texaco’s finest had me feeling like a millionaire.

LS: I love the new name. Our general style has changed a lot, and I think our current name is much more fitting to everything we are doing now. 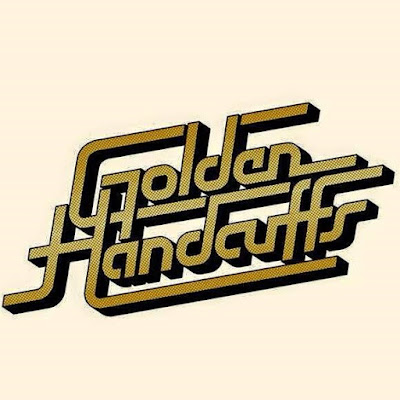 What band or musician would you say had the biggest influence in your life?  If you can recall, tell me a bit about the first time you heard them and how it changed you from that moment forward:
RL: Jonathan Richman and the Modern Lovers. I can remember hearing Ice Cream Man and his version of Buzz Buzz Buzz when I was like 2 or 3 years old and just laughing and dancing and thinking it was the greatest. That’s the stuff that keeps me writing songs and making poor life choices.

KO: In middle school my mom didn’t allow me to listen to all the stuff the other kids were listening to. She was cool with me listening to Lou Reed and The New York Dolls and Minor Threat though because she thought it was nice I was listening to music that was demoting the sex drugs and alcohol lifestyle. (The lifestyle that I will be living when I finally retire and am able to take out my 401k).

LS: Lemmy for sure. I remember my old man showing me a live video of Motorhead, and being blown away by it. The boots, the denim, the rings, the bass, the attitude. Rock & Roll. Live To Win fucked me up forever!

I’ve heard from some people that writing or playing music is therapeutic to them. Have you ever found this to be true?
RL: Yeah I can get behind that. The most therapeutic thing about writing songs for me is making them fun, good, and about nothing much more than one feeling or thought. I try to avoid anything that takes more than a sentence or two to explain. 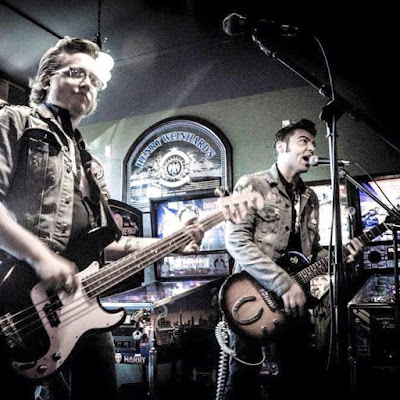 Golden Handcuffs are currently based in Portland Oregon.  With so many great active bands there, is it tough to get noticed and to get people to come to shows?  Do you feel like you’re going to have to start from square one with the new name?
RL: Yeah man it’s competitive, but that kind of thing just makes all the bands better. We know we can share a van for over a week without planning elaborate ways to murder each other, and that’s more than most new bands can say.

What feeling or sentiment do you want your audience to walk away with after seeing you guys play live?
RL: How can I party with these guys? Would they be so kind as to crash at my place?

This is the part of the interview that I like to call “four questions I stole from other interviewers”:

1.      What was the first album you bought with your own money?
RL: Probably the Wedding Singer soundtrack. I remember it had White Wedding and I thought that was pretty rad.

LS: Reverend Horton Heat - Smoke ‘Em If You Got ‘Em

KO: NOFX- 45 or 46 songs that weren’t good enough to go on our other records

3.      What was the first concert you went to without your parents?
RL: Public Vacuum at Ray’s Golden Lion in Richland WA

LS: The Nekromantix with Shark Soup at the Hawthorne Theater in Portland OR

KO: No Regrets at Landslide Skate park in Detroit MI

4.      What band or musician's picture was the first to get hung up on your
bedroom wall?
RL: Metallica – Master of Puppets flag

KO: A Mudvayne poster in 5th grade… this is what made my mom limit my music selection, thanks mom.

LS: 800 Octane - Rise Again. Some local favorites of mine.

When can we expect the arrival of Golden Handcuffs debut release?
RL: As soon as we can make it happen! We have our debut single all recorded and we’re heading back into the studio in late September to work on some more tracks. Maus at Red Lantern Studios here in Portland did a hell of a job! We’re shooting for having our vinyl debut out by early 2016.

Posted by Audio Ammunition at 4:59 AM