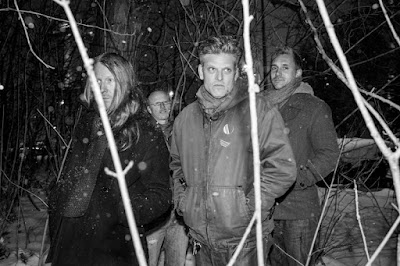 Berlin's Dysnea Boys play relentless, hard hitting punk rock as if they were in Southern California and it was the Reagan years all over again.  The band recently answered some questions for us about how they all got together, what the band has coming up in the near future, and what exactly is a "Dysnea" boy!

Who are the folks that make up Dysnea Boys and what do you all do to earn your keep in the band?
C.C.: I’m the bass player, and I do my best to keep up my chops so the guys don’t kick me out of the band!

JASON: I sing, do the words. Love to do graphics too.

TOM: I play drums and I am needed to counter the West coast with some basic south Germanism.

Dysnea Boys are currently based in Berlin Germany, but some of you aren’t originally from there.  How did you all meet and decide to play music together?
C.C.: None of us are form Berlin actually, but most of us have spent a good number of years here
now. I’ve just put in my 5th year. Although Chris is also from Vancouver, we didn’t meet until living here through mutual friends. Jason and I met at a party in my first week of being here. He was talking about the Germs and snorting a vodka shot. I knew I wanted to be in a band with him immediately. Tom and I work together and met there.
Jason. Moved here about fifteen years ago. Two kids and a tone of other music too. I’m from near San Jose, California.

CHRIS: C.C. and I wanted to get a band started pretty much as soon as we started hanging out here in Berlin, had a few jams with Tom and shortly after tricked Jason into singing for us.

TOM: I guess that´s how it happened. For me it´s great that I was lucky enough to have run into people that still appreciate the Punk and Indie stuff we all grew up with but on the other side are totally open (and able) to create our own sound. 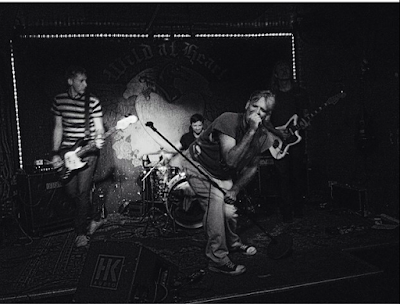 What band or musician would you say has been the biggest influence on you?  If you can recall, tell me a bit about the first time you heard them:
C.C.: I had an older cousin who introduced me to AC/DC and Van Halen when I was really young. Those were my heroes as a kid. It wasn’t until the 8th grade that I heard punk, and that was life changing. Obviously we all traded tapes and got our hands on everything we could, but SNFU at that time was my favorite band. I can still sing every word of their first two albums.

JASON: .The Who, Zombies, Beach Boys, 70s rock stuff, Germs, Fall, oldies and cruise music. As a kid I loved watching little RnB groups jamming in the band pavilion at Flea markets. Guys my age actually pulling off listenable music. I’d get over that later.

You recently released the Find Water 7” earlier this year.   Can you tell me a bit about the making of the record and what led to the decision to release it yourselves?
C.C.: We recorded it at the school Tom and I work at! It was recorded and mixed by Brodie White (from Berlin’s The Sun and the Wolf)

JASON: Compulsive need to give birth to music and songs. Get them out there in the world. Sonic messages in bottles. Who’s gonna respond??  What opportunities will be created?

CHRIS: Releasing it ourselves was the fastest way to get it out there.

You guys did a video for the B-Side to that record, a song called “Mind Stories”.  What was your experience like making the video, were you pleased with the end results?  Where were the live cuts of the band filmed?
C.C.: Jason made this one happen!

JASON: Bryan Ray Trucotte in LA did that. The guy from Kill your Idols who published Fucked up and PhotoCopied. Punk is Dead Punk is Everything. Live footage is from Schockoladen here in Berlin. That other stuff is stock US advertising and Natl Geo stuff he’s been sitting on since God knows when. We had nothing to do with the editing process;  that was his Frankenstein. I’m fine with it. Time to get some together for the other songs.

CHRIS: the live footage was filmed by Derek Howard at a Berlin venue called schokoladen.

You also just released a split 7” with a band called Jiffy Marker on the Canadian label Debt Offensive Records.  How did you end up pairing up with the Jiffy boys and Debt Offensive?
C.C.: The guys in Jiffy Marker are long time friends of Chris and I. Chris played in bands with some of the guys and everyone in that band has a long resume in the Vancouver music scene.

CHRIS: Yeah, longtime friends. So great to be on a 7” with such swell peeps!

What sorts of things typically influence your song lyrics?  Is there any subject out there you try to steer clear from in your songs?
JASON: Try to steer clear from?  Um, no…. Intentionally stay away from???  No.
On the contrary, I hyper focus on things I’m obsessed with, stuff that I really really really only want to sing about, Atmosphere, quest, emergence, redemption. Trying to carve out a space through voice, word and song.

Do you feel like music is as much of an influential force to young people in this age of instant accessibility and excessive consumerism as it ever has been?  If not, do you think it ever can be again?
JASON: Music’s role in my life has changed drastically several times. I’m going to go with the notion that this happens to most people. At first it might be aegis and kinda like a life preserver. Then it becomes a social tool to help you rediscover and invent yourself. Maybe even show you why you behave the way you do. Music then might turn into a spring board to help hurl you into all kinds of other arts and forms of expression. I’m hoping that’s what it can do for someone.

CHRIS: Depends on the kid I guess... there's definitely a lot of distractions in the world today but I would like to think being a music fan runs a bit deeper than apps for your telephone. Also, these days anybody interested in music has access to pretty much everything, usually for free or very cheep. Music fans are just as crazy about music as they ever were.

TOM: Music is still really present in young people´s lives. Festivals are sold out, everyone is hanging on earphones. There is still a lot of great and shitty music out there. 30 years ago too. Anyone who tells me that nowadays it´s so hard to find great music just hasn´t checked properly. Maybe the great amount of choices and the unlimited accessibility makes kids like their stuff for shorter periods, but there are still lots that become seriously interested or even part of a fan/sub- culture. 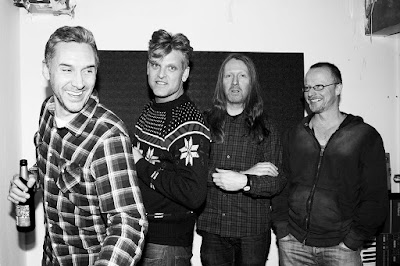 Like me, I’m sure you remember the days before Social Media.  Do you feel like it’s become an essential part of promoting shows, records etc..?  Do you think promotion can still be done effectively without it?
C.C.: I think there are negatives and positives. I’m grateful that I played in bands back when records still sold, and little labels could support bands on tour, and with distribution and promotion. These days with less and less money coming back from music sales, I think social media is where promotion can be done cheap, or free and bands and labels have to be fairly tech savvy. That’s where we could use a little help!

JASON: Had a talk with a guy a couple weeks ago who I believe was born in ‘96 or so. He asked me how we booked tours way back then without computers. I told him with a straight face,’’ Telephones, post cards and moms cooking in kitchens next to phones scribbling and dictating messages spoken by distant voices down on sheets of paper. Sometimes that paper might have been pink or even yellow with thin blue lines placed horizontally. It was best if you wrote between the lines. Then I might call back and in turn give someone else a message if the person I needed to speak to wasn’t there. We handled tons of dates like that. Vast tours. Worked just fine.  Bet you could do it with a cell phone too.

CHRIS: It's definitely a good way to reach a lot of people at once, we still make posters and hand bills for every show. There's a lot of people that have nothing to do with social media and prefer to find out about gigs via more classic means.

Tell me about the name Dysnea Boys, how did you come up with that?
JASON: I liked it because I thought it was an homage to the Bruce Johnson Beach Boys song Disney Girls (1957). Thin White Rope has a track called that as well. Chris came up with it.

CHRIS: it's a reference to a song by Blue Orchids. We originally spelt it like the corporation does but figured we could avoid legal action if the spelling was different. Now it reads more like dystopia and nausea, perhaps a little closer to the shady dealings of the magic kingdom. 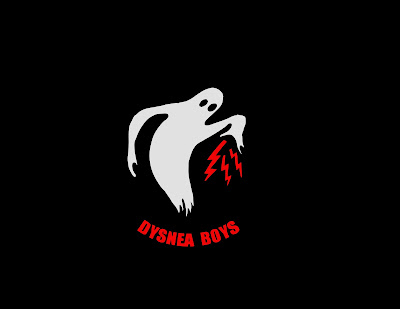 Where can people go to hear Dysnea Boys and to buy your music?
JASON:  Contact us and order a 7 ’’ Find Water” b/w “Mind Stories”. There’s the split 7’’ as well but it’s extremely limited from what I understand.

What lies ahead for the rest of 2015 for the band?
C.C.:  We have a new full-length record completed. We recorded in Berlin with T.V. from the Radio Dead Ones. It was mixed in London by Andy Brook, and was mastered by Daniel Husayn at the North London Bomb Factory. We’ve had some great people work on it, and we’re super happy with the result. Now we’re looking for the right label. Hopefully we can announce that soon.

JASON: Yeah, our album’s done. Call us to come play your town!!

Posted by Audio Ammunition at 6:22 AM