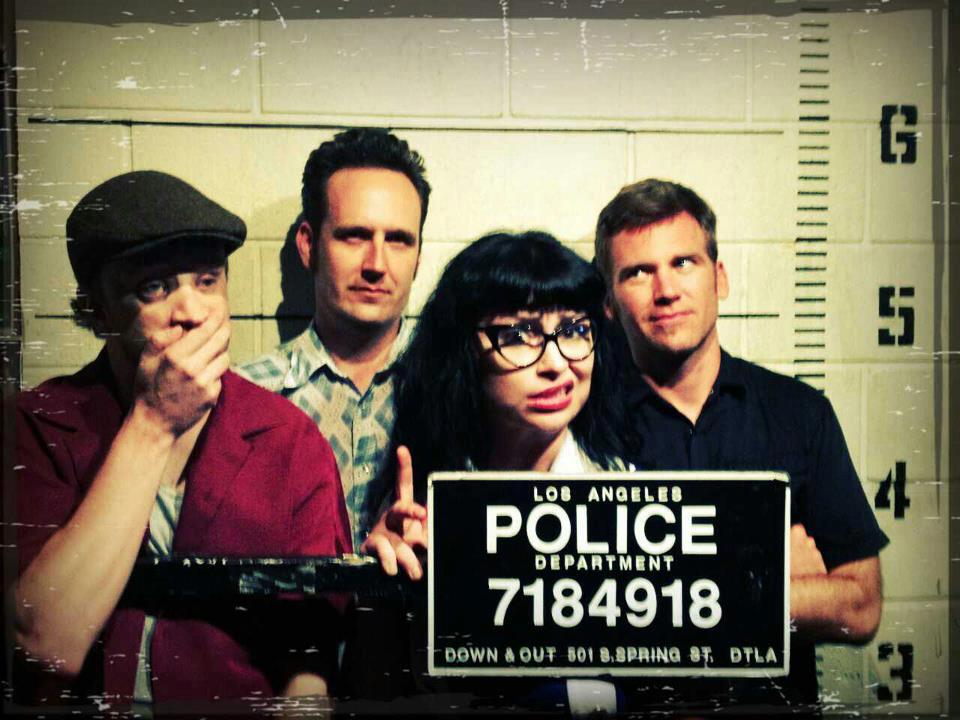 Most bands that I hear from my hometown of Phoenix, Arizona either make me recoil or their music goes totally without notice.  I don’t know which is worse.  However, every now and again I hear one that makes me want to root for.  One that gives me hope that all is not lost in an ocean of second rate metal dinosaurs and uninspired blues copyists.  One of those bands is The Rebel Set.  They glide at their audience on a wave of reverberation that is wrapped up in classic noir and surf guitar mystique in the midst of a garage punk assault.  The band takes the better parts of Rock N Roll from times ago and mixes it up with a dose of their own allure.  Sounds easy enough, however you have to know which parts to excavate and which parts to lend your soul to.  That’s been the recipe for rock n roll since its conception and the Rebel Set have become master chefs at this delicacy.

Who’s answering the questions?
Joe is.

Who’s all in the band and what instruments do you play?
Joe - guitar,vocals
Katey - organ
Jeff- drums
Brandon - bass

Are you all originally from Arizona?
All but Jeff, he is from Arkansas.

What or who originally made you decide to pick up an instrument and start/join a band?
I hung out with these teenage metalheads when I was 12 and they were constantly trying to start bands. My dad had a guitar so I decided to give it a shot even though I hated metal.

What influenced The Rebel Set’s look and sound?
Probably growing up listening to my dads 60’s records along with the 90’s garage rock I was into in my youth. As far as the way we look, we all just dress the way we dress anyway so I guess we are influenced by our own good taste in that regard.

You guys just did a “mini” tour all around Southern California, how do you feel that went?
It went great. We tend to go over a lot better outside our hometown much to our dismay.

As populated as the Phoenix metropolitan area has gotten, culturally, it has a long way to go compared to other cities this size.   How does the Phoenix/Tempe music audience take to the band as opposed to other parts of the country?
We tend to get a lot more support and go over a lot better with audiences in other parts of the country. Therefore, we try to get out of town as much as possible.

What is Silver Hornet Records?
It is a front for a criminal enterprise. They put out our records so we don’t ask questions.

When you buy a record, you get cover art, liner notes, even pictures of the band.  You get something tangible.  With digital music, you have an album title and a band name.  If you’re lucky, a tiny quarter sized picture of the album art.  Do you think the MP3 has killed the romance for Rock n’ Roll?
In a way, yes.  Having a physical copy the sound quality is better and seeing the artwork that goes along with the music definitely enhances whatever feeling the artist was intending to convey.

Reading some of the press the band has gotten, people have said how dark your music is. Were you aware of this when you were writing the songs or did this come as a surprise after everything was laid out?
That was a total surprise. We never intended to be dark and I really don’t think we are very dark. We have a lot of songs in minor keys which I guess sounds darker but that was definitely not our intention.

People used to buy music and get their water free; now people pay for water and get their music free. How do you think this affects the industry and especially the artist who is just trying to make a living?
I think this is good news for water artists.

Where can people hear the band?
Well, they could go to our Facebook page at www.facebook.com/therebelset to get links to our music online.  If they happen to be in Arizona, or California or Nevada they can check there for announcements on our upcoming tour dates.

What’s next for The Rebel Set?
We will be making a new album, which should be out in the fall and rereleasing our last 7” this summer. Keep your ears peeled.


Email newsletters for bands at ReverbNation.com


Posted by Audio Ammunition at 1:24 PM