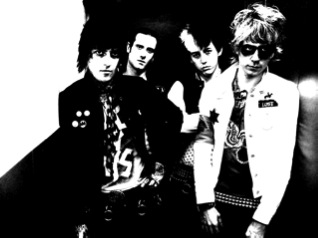 Where is the band from?
London

Who is in the band and what instrument do they play?
Terminal Gagger: Vocals
Dagger Gagger: Guitar & Vocals
Rudy Retch: Bass & Vocals
Bushy Signal: Drums & Vocals

How did the band start?
Me and Dagger started it a few years ago after knowing each other for while and being in different bands and stuff so we decided to start a band together and initially there was my cousin Chris (Busy Signal) on drums and I played bass as well as singing. Then after a bunch of 7”s and our first LP Rip You Apart, Chris left to study medicine. He’s pretty handy with a knife.

What bands did you have in mind when starting this band?
Definitely early GG / Jabbers, Dead Boys, Pagans, Eater…snotty, straightforward punk rock.

Why the decision to move from a three piece to a four piece?
That was because Chris left. So we found a new drummer, Bushy, who had already been in loads of bands with Dagger, and I gave up the bass to just sing, and we recruited Rudy.

According to the band’s bio, The Gaggers got together through a staunch hatred of everything new and polished. This motto is definitely evident in the band’s decision to record in such a raw fashion. Is this hatred a comment on your local scene or music in general?
We just all like real punk rock which, to us, needs to have that rawness and urgency otherwise it loses the ‘punk’ and just becomes ‘rock’. Nothing wrong with that but that’s not what we’re going for. There needs to be energy and bile.

Judging by how fast Gaggers singles sell out seems like you have a fan base that supports “out with the new and in with the old!” motto. One of the YouTube comments on your Hostage video is “the return of true punk in the UK after 20 years of total embarrassment.” Vibrator Buzz called “The Gaggers . . . the new 100 Club, [and] the new Roxy.” Does this have any effect on what the band does or the band operates? I would think the band would have to be happy with generating such a supportive fan base. Most bands are lucky to have one single sell out. Does that band have any thoughts on this?
We are definitely happy with compliments like that! People like Dirk at Vibrator Buzz know the score! I’ve always said that there’s nowhere to go in punk except backwards. We’re nearly 40 years behind the times and proud of it! The whole London punk scene at the moment has a very genuine late ‘70’s feel – the sound, the look, everything. The No Front Teeth connection helps to sell the records fast but I truly believe this is what people have been waiting for from London punk rock and there are a bunch of us doing it – The Ten-0-Sevens, The Ricky C. Quartet, Johnny Throttle, The Unreleasables, Thee Spivs, all the other bands we’re involved with…

Considering members of Gaggers also play in Teenage Tricks, Disco Lepers, Botox Rats, Black List Brigade, The Blowouts, The Seminals, The Troubadours, The Hateful, Needle Automatics, Dagger Dicks, and The London Guns; how do you find time for Gaggers with the members in all these other bands? Also seems like you guys are creating a scene in London with all these bands. How is the punk scene in London?
We are all workaholics!! We also all have full-time jobs too. Some of those bands are now defunct like the Disco Lepers, Blacklist Brigade, The Blowouts, Seminals, Hateful and Dagger Dicks. As I said earlier, the London punk is great – but very small so a lot of the scene is made up of bands! I think a lot of foreign punks think that when they come to London they will see the scene of 1977…unfortunately not, it’s not really that vibrant a scene. It’s cool, but small.

Explain the connection with No Front Teeth records.
I started No Front Teeth over ten years ago with my friend Jon and we still both run it to this day. There was a time when there were loads of people involved but we stripped it right back down to the two of us. We originally started as a zine but then started to put out records by our own bands and also to put out music by bands that we loved especially in the form of compilations. We really wanted to get a lot of those Hostage and Disaster bands more coverage in Europe.

Do you think music can still be a vital force in such a disposable age?
Definitely. The power of music will never die. I actually think music is more powerful now than ever even with the digital age supposedly killing it. Also, punks are traditionalists and will keep vinyl alive forever. No Front Teeth is a 7” label and the 7” is perhaps the most obsolete format of music, apart from the eight track! But it also holds a really powerful position – people respect the 7” and really chase it.

How is the new record entitled Blame You coming along?  Any scheduled release date?

It’s taking a while longer than expected but it’s coming along really well. All the drums are recorded. The bass and rhythm guitars are done and some of the vocals. So we still need to record the lead guitars, finish the vocals and also the backing vocals. Then there’s the mixing…so I think we’re looking at a late Summer release hopefully.

50 years ago people used to buy music and get their water for free, now people pay for water and get their music for free. How do you think this affects music in any way?
I’m glad that people are downloading music for free – it was about time that the music industry suffered. I know that’s a strange thing to say being in a band and running a record label but I think that the greed had to stop. As I said, punks are traditionalists so we’re not really affected by that at all. I see a lot of Gaggers stuff available for download on blogs and I take it as a compliment. Someone took the time to upload the music so that others could download it – that’s fine. Also, so much of our stuff is now out of print so how else are people supposed to hear it?

Where can people hear the band?
On blogs! Maybe iTunes at some point…or come see us live.

What’s next?
We are on the soundtrack for a new horror movie called ‘Bath Salt Zombies’ that has just been released and some other bands are the Murder Junkies, Antiseen, Dwarves, Meatmen…so we’re in good company! I guess we’ll start writing record number three. More shows. More 7”s, some splits…all good shit to get you gagging. Cheers.


Get Band email for free at ReverbNation.com

Posted by Audio Ammunition at 8:31 PM