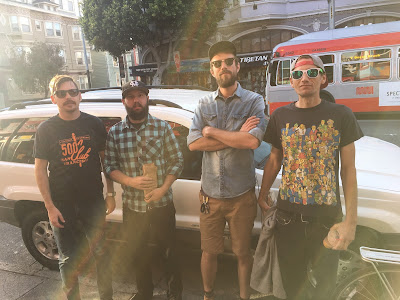 When I first heard Alvie and The Breakfast Pigs they were a loud, high energy, busted up blues band that reminded me of groups love like The Dirtbombs, The Oblivians or early White Stripes.  I only got to see them live a couple of times before they moved from the dusty roads of Tempe AZ, to the rolling hills of San Francisco. The Breakfast Pigs weren't trying to reinvent the wheel, but what they were doing was running over everyone in the room with it and that I admired.  This group had guts, that much was apparent.  Along with frontman Alvie Adam's appreciation for trashy blues, the band has now added a splash of Exile on Main Street  and a pinch of Ooh La La on their new EP Indian Rugburn.  Needless to say I am delighted in what I heard.  Not just the music itself but the fact that this particular type of music is coming from a young band.  Most people their age have dismissed bands like The Rolling Stones and the Faces as misogynistic dinosaurs. Yes, rock; n roll is mean, unsafe and unpredictable, but that's what makes it so great,  Alvie and The Breakfast Pigs embrace this beast. So for those who like being wrapped in your warm cozy blankets, there's a never ending cesspool of EDM DJ's and Three Mile Pilots out there to tickle your stodgy souls .  But for the rest of us that still like sweat, grit and fire in our music: Alvie and The Breakfast Pigs are here and ready to kick over some troughs.

Who is currently in the band and what does everyone do in it?
Alvie Adams- Rhythm Guitar/ Lead Vocals
Philip Thorneycroft – Lead Guitar
Jake Natkin- Drums
Brady Boyle- Bass/ Vocals when he feels like it.

So Alvie, you moved from Tempe AZ to The Bay Area a couple of years ago correct?  The band consists of all new lineup from the band you had in Arizona, how did you meet up with the new Breakfast Pigs?
ALVIE: Yeah, it has been quite the journey to get here. Philip and I moved to Alaska for a summer to save the money to afford to come out to the bay and keep playing music. Philip was actually one of our OG breakfast pigs back when we were originally a 4 piece in 2010. We played a few shows just for fun before he moved away. Jake has been our drummer since 2013 before the first EP Snake Headed Faceless Cowboy came out when we were a 3 piece. Mike Spero our old bass player is on to bigger and better things. He now plays bass in Authority Zero and is killing it. Brady has been a friend for years and used to live in Tempe in our house “Breakfast”. He had been in SF for 5 years and was down to replace Mike when we made the move. So it was actually pretty easy after we got out here. 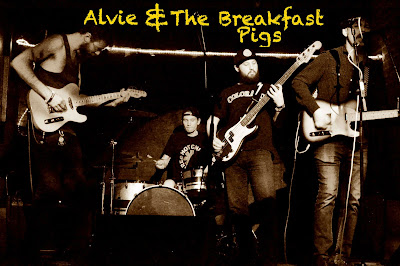 What are the crowds and the venues like out in San Francisco as opposed to Tempe?  Do you find people there are generally more responsive to your music?
ALVIE: If you ask anyone in the SF they would tell you that the music scene here is dying, which it kind of true, but I’d say its more like moving across the bay to Oakland. Compared to AZ the music scene is still kicking ass here in SF. With lots more venues and people of all ages actually down to go out and see live music. Seems like people that aren’t in the music community still actually care about the local scene. With rock ‘n’ roll not being the most popular genre in this day and age we are having some great response to our loud music and hoping this is only the beginning.

After one of your shows, what sort of feeling or sentiment do you hope your audience walks away with?
ALVIE: I think our music is best after a few drinks have gone down that hatch to get people to loosen up and just dance. I hope that when people come see our show, they leave with a lot of energy and a sense that rock n roll can be danceable and more fun than a DJ set. 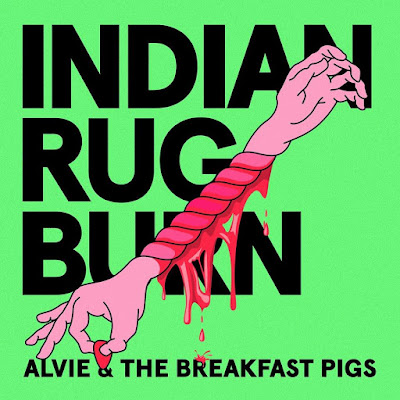 Tell me a bit about your new EP Indian Rug Burn.  I know this may be a bit Sophie’s Choice, but which new song stands out to you most?
ALVIE: We are very excited to be releasing Indian Rug Burn in San Francisco; we have come a long way. This EP represents our journey to get to where we are today. With songs like “Hey Bay” that represent our first few years in the bay and songs like “Stuck in Whittier” which talk about our life when we lived in Whittier, Alaska in a small Fishing town.

And speaking of songs, what sorts of things do you typically enjoy writing songs about?  How do you think the move out to the coast has influenced your songwriting?
ALVIE: I think our song writing style is evolving quite nicely. We really took a group approach on writing this EP rather then just having one person come up with the songs, I think it really shows. When writing lyrics I really like to keep it ambiguous so that the audience can really interpret our songs in their own way. Like most people lately, the Political dilemma has been on my mind. However, I usually try to keep it light subject matter with some humor if we can. I think the move has really just opened my eyes to life outside of AZ and to be honest it’s a complete 180 in every way.

You’re premiering a video for the song “Hey Bay” off the new EP today.  Tell me a bit about it?  Where was it shot and who helped out with the production?
ALVIE: With the band new to the bay area and money always running short with musicians we really wanted to make it a personal video about the Bay area. We shot and edited everything ourselves.  The Video is pretty much just us dicking around in SF having a good time. This is what our music is about and we wanted to show that off with drinking, friends and great beautiful bay scenery.

What’s been your favorite part about making music so far: the writing process, the recording of it, or performing it in front of a crowd?
ALVIE: Wow that is a tough question. With me (Alvie) being a recording engineer I may be biased in my answer. I really like watching the songs start as drums and continue to grow into something that is normally different than you expected, always hoping it’s different in the best way possible. I will also be very excited to play all these new songs live. Being on stage leaves us with this certain kind of feeling that we all love.

The new EP, at least to me, has a strong Stones, Faces, kind of 70’s bluesy/rock feel to it.  Were those types of bands actually influences on you when you wrote these songs at all?  If not, who was?
ALVIE: Yeah J, it for sure does. Stones, CCR, Faces and Edger Winter Group are definitely some of the older bands that we love.  Some new bands that we are inspired by are Highly Suspect, Fidlar, The Monsters, and Radio Moscow. The band has always tried to keep our bluesy rock feel even with new songs.

What are your goals for your band and your music?  In like say 5 years, where would you like to see your music career?
ALVIE: Well, if we keep things moving the way they have been, we hope to have a full length LP out next year, which is already in tracking stages for recording. We also are planning a small tour with dates TBA in the Spring, so 2017 is looking to be a busy year already. If we can continue to grow and keep moving forward in the next 5 years we would love to do more than just a West Coast tour. We are on the look out to be a part of as many festivals as we can find; also, hopefully to play with more of the bands that we love and support. 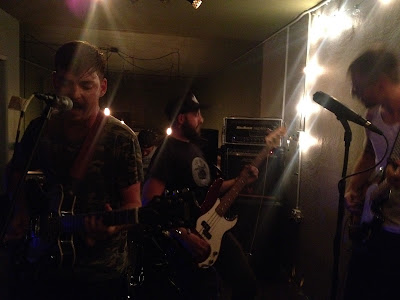 What is the best way people can hear and get a hold of your music?
ALVIE: We really want to have it available as much as possible. I would say Spotify or Bandcamp is the best way to hear the music, but it will be on most platforms. We are also going to release this EP on some smaller labels in California and on the east coast, so tapes will be available as well.  Or, if you’re in the bay area you can always come catch a show and buy the new EP on vinyl.

What lies ahead for the band for the rest of 2016?
ALVIE: As of right now we are just trying to book as much as possible until the end of the year. We are planning a tour with one of our Oakland favorites Bones and Bootleggers, but that tour will most likely be in the Spring. We are going to try and book some LA and greater Bay Area shows to keep expanding in California.


Be sure to follow Alvie and The Breakfast Pigs on all of their latest adventures!

Posted by Audio Ammunition at 12:14 PM