The Fox Sisters: It's Alright, Have A Good Time 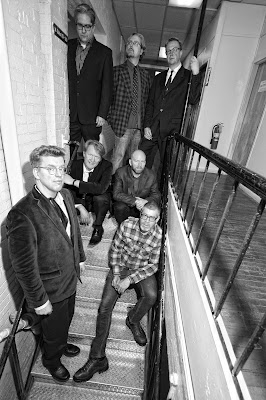 I know there's a lot of evil and injustice that goes on in the world, but to constantly dwell in that cynicism will in fact consume you.  You get pessimism fed to you every time you turn on the television, social media, film, and music. I'm not saying to ignore it all together mind you, but there has to be an escape, a momentary parting of the swirling storm clouds. That's where Rochester, New York's The Fox Sisters come in.  They play soul shaking, body quaking, late 50's/early 60's style Soul/R&B music. The same kind of terrific sounds that radiated from people like Otis Redding, Sam Cooke and Jackie Wilson decades ago and they do it with every bit of the same passion and fire that those guys did back then.  But what The Fox Sisters really do is provide a life raft for a society sinking in it's own skepticism,  As important as it is to follow current events and involve yourself in causes you believe in, it's just as important to loosen your collar, put on your dancing shoes and just have a good time.


Who is currently in the band and what does everyone do in it?
Mark Bradley - saxophone
Darren DeWispelaere - trumpet
Jimmy Filingeri - bass
Patrick McNally - vocals
David Snyder - guitar
Brian Shafer - drums
Will Veeder - piano

How did you all meet and decide to play music together?
PATRICK: We all sort of "grew up" in the Rochester music scene and have had a lot of fun watching each other’s bands over the years. Some of us have been in bands together from time to time. We have a lot of respect for each other and have a shared musical sensibility. When the idea for this band came up, it seemed natural for us all to work together.

JIMMY: We have all known each other for years from playing in different bands around town. Patrick and I were in a band called the Thunder Gods that had runs its course. After a few years off we decided to try something different. We wanted to use rhythm & blues music as a foundation but we weren’t interested in trying to recreate the vintage sound. What we had in mind was aesthetic or a mood. We wanted to put on a show made people feel the same way we felt when we saw some of our favorite bands or listened to our favorite records. We wanted to make people dance and hoot and holler and scream for more.

What band or musician first inspired you to want to pick up an instrument and learn to play and/or write music?
PATRICK: A lot of bands have inspired me, but it was a Rochester band called The Fugitives that sort of cemented my resolve. I remember seeing them play in
a local shithole bar under a single bare light bulb, and the music was so raw and great and they looked so cool, I decided that I was going to stop thinking about it and actually try it.

JIMMY: I suppose it was bands like KISS, Cheap Trick and The Stones that first gave me the bug when I was a kid. That was the beginning of my life long obsession with music and records. As far as actually picking up an instrument though. Patrick and I were roommates and he wanted to start a band. He told me I was going to be the bass player. That was it.

How would you describe you band to your grandparents?
PATRICK: With the help of a medium. They are dead, dead, dead

JIMMY: Once their spirits were conjured I would tell them that we sound like a band that would play dances and frat parties in the 60’s. Some up-tempo numbers to fill the dance floor. A few slow numbers for close dancing and kissing. Then finish them of with some wild rockers to make people go crazy and break stuff.

JIMMY: Fun songs.  Honest songs. Songs you can dance to. Songs that make people move and shout. Songs that let you forget about the news of the world for a few minutes.

I’ve heard people say that playing and writing music is therapeutic to them.  Have you ever found this to be true?
PATRICK: Definitely. The voices stop when I write. The voices of past presidents. A break from Franklin Pierce is always particularly welcome. Great hair. Total jackass.

JIMMY: Working on new songs with the band is more therapeutic for me than writing them. As a bass player my songs are usually just a skeleton with some lyrics. It’s not until all the band members add their own parts that it becomes a song. It’s exciting because I never know what the final product is going to sound like until they add their magic. Playing is definitely therapeutic, my ego craves applause. It’s nourishing.

Does it annoy you or distract you at all to see some of your audience members fondling their phones while you’re up on stage performing?
PATRICK: We’ve been lucky in that we don't see a lot of that. What we see is mostly smiles, which is really nice. Every once in a while somebody takes a picture, but that's nice too. Somebody thinks enough of you to want to take your picture. What's not to like about that?

JIMMY: Not a problem at our shows. Most people are dancing or jumping around. Cameras are fine. I like to see pictures of us. 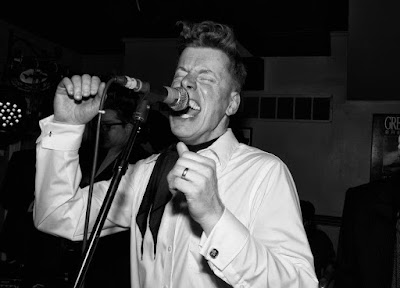 After one of your shows, what sort of feeling or sentiment do you hope your audience walks away with?
PATRICK: I hope people walk away feeling like they've made a new bunch of friends that they love to dance with.

JIMMY: Leave them wanting more. Elated. Spent. Hopefully telling their friends about us the next day. We want to be on their “guaranteed good time” list.

What is your favorite album to listen to from start to finish?
PATRICK: Sam Cooke - One Night Stand: Live at the Harlem Square Club. The world's greatest record.

JIMMY: Jerry Lee Lewis - Live at the Star Club. Pure Rock & Roll from start to finish.  It’s tough to pick albums because most of my very favorite music came out on 45’s. At the time albums had a lot of filler on them. Rock & Roll, Rhythm & Blues, country & soul from the late 40’s until the early 70’s is my favorite kind of music.  I like to listen to Dave the Spazz from start to finish every week on WFMU.

What’s the best advice anyone has ever given you that you still follow to this day?
PATRICK: If you can see them from behind, marry her.

What is the best way people can hear and get a hold of your music?
Our music can be found on:  Bandcamp: thefoxsisters.bandcamp.com

We can be contacted via email: foxsistersband@gmail.com

What lies ahead for the band in 2016?
PATRICK: More good times. We plan to put out our second album soon, and will be appearing live regularly.

JIMMY: We will be playing several shows with the Rochester R&R/R&B Revue. That is The Fox Sisters along with our friends The Televisionaries and The Temptators. All powerhouse bands who aim to entertain. Hopefully some shows will be recorded to come out as a live record.  We have a lot of new songs that will be recorded for our second record. Until then, just playing and trying to show people a good time.


Posted by Audio Ammunition at 7:35 AM