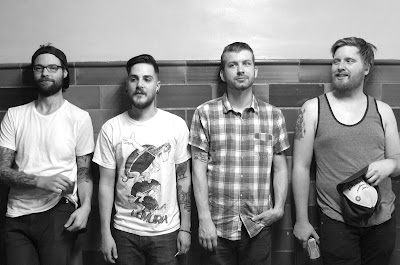 After hearing Atlanta, Georgia's New Junk City’s self-released Self-Titled debut LP that came out in the latter part of 2014, I had to know a bit more about what makes them tick.  They have a distinct sound that’s loud yet intimate and unpretentious.  John (singer/guitar player) was kind enough to allow us to momentarily peer into his soul.

Let’s start off by telling me who’s currently in the band and what does everyone do in it:
John plays guitar and sings. Zac plays bass. Justin plays guitar. Jeff plays drums.


How did you all meet and decide to play music together?
JOHN: The other guys have been playing music in Atlanta for a lot of years in a bunch of different bands. Jeff and Zac were both members of Die Benny and toured together in Mose Giganticus (from Philly) in the early/mid 2000’s. Justin was in a band called Wrister, and they all knew each other from playing shows and what not. Jeff and Justin were also in one of my favorite Atlanta bands for a few years called Bad Mammals. Jeff and I have known each other since high school and I was lucky enough to fill in on guitar on a tour with Bad Mammals.

After that band ended, Jeff and I started working on some songs I had set aside that didn't quite fit with my solo stuff. We did a few studio sessions and realized we needed another guitar player. I love Justin's guitar playing and was really stoked that he was into the songs. We had a fill in bass player for the first few shows but nobody could really commit. Zac offered his services shortly after and we graciously accepted.

You guys came out with your Self-Titled debut LP late last year.  Can you tell me a little about your experience making it?
JOHN: It was a really simple and straight forward recording process. We did everything at The Cottage in Atlanta, GA with engineer/producer Damon Moon. It was done in three or four days over the course of a couple months. Damon is a really easy guy to work with. He is a true professional - very invested in the idea and experience of "making records." He is sincerely one of my favorite people and we're lucky to work with him.

How would you describe New Junk City’s sound to someone that’s never heard your band before?
JOHN: This is always the question that’s the hardest to answer for me. However I describe our “sound” will probably be wildly inaccurate to everyone else that listens to the band. None of us really agree on any music other than the songs we write (and maybe Dookie by Green Day.) I think at the heart of it we’re just a punk rock band. We have a really wide array of influences and interests. We probably land somewhere between Uncle Tupelo and the Get Up Kids.

What sorts of things typically inspire you song lyrics?  Are there any subjects you purposefully try to stay away from?
JOHN: I mostly just write about my life and experiences and those of the people around me. I definitely believe in “write what you know” so I just try to write things that are honest. It’s probably best to let the songs speak for themselves.

I stay away from overtly political stuff and I have no interest in bizarre surrealist lyrics. There isn’t anything wrong with either of those things, I just really enjoy trying to tell personal stories I think people can connect with.

New Junk City is currently based in Atlanta, GA.  What’s it like for a band like yours to play there?  Is there a supportive scene going on out in the land of peaches?
JOHN: There is a really supportive network of musicians in Atlanta. It’s a big city, so everyone definitely has their own scene, but in my experiences, there is very little shit talking, competitiveness, or drama. I think that there are really good music ethics in Atlanta. We’re lucky to have so many good venues in our city, and even luckier that they are run by people that actually give a shit about music and musicians. Every time I go on tour, it makes me thankful for the venues, bookers, and folks running sound at our venues in town. 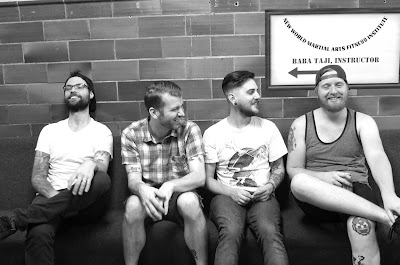 Speaking of shows, tell me about the worst show you’ve ever played.
JOHN: Bad shows happen, I don’t really want to talk about them other than to say I’m glad that the vast majority of our shows are awesome. The bad ones just make us more thankful for that.


I was reading this interview with Keith Richards and he said that anyone buying digital music is getting short changed.  Do you agree with this statement?
JOHN: It depends on the person’s relationship with music, right? Isn’t it up to them whether or not they’re getting short changed?

Anyone actually paying for music in any format these days is great, and who am I to tell them how they are listening to music is wrong or somehow less than the way that I choose to? Anyone that says anyone else’s experience is less than theirs is an asshole. Besides, some artists are doing strictly digital releases due to the fact that vinyl is expensive, cassettes are still seen as a novelty, and no one buys CDs.

Coming from a state that’s deep in the heart of the south.  How do you guys weigh in on the whole Confederate Flag controversy: symbol of southern heritage or symbol of tyranny and oppression?
JOHN: I don’t really like getting involved in anything political, but I’ll say that I really don’t care about the flag. I’m not invested in it; it bears no meaning to my heritage or history. Patterson Hood wrote a poignant piece on the issue, and you should really just read what he has to say: http://www.nytimes.com/2015/07/09/magazine/the-souths-heritage-is-so-much-more-than-a-flag.html?_r=0

Are there any other bands currently playing and based in Atlanta that you guys are into?
JOHN: Tons! My favorites right now are: The Hotels, Coma Girls, Joseph Lazzari, The Wild, Wymyns Prysyn, Terminally Ill Babes, Seagulls, Places to Hide (RIP), Wicked Pretty, and Slugga.


Where are some of the best places people can log on or go to listen or buy you music?
JOHN: You can buy the record here:
Bandcamp:https://newjunkcityatl.bandcamp.com/

Stewart, who runs No Breaks Records (they put out our record) has an impressive collection of other releases he has put out in addition to a vast library available in his distro. He is the best dude in the world and everyone should buy records from him here: http://www.nobreaksrecords.com/

What lies ahead in the near future for New Junk City?
JOHN: We’re currently in the studio. We’re putting the finishing touches on a couple songs for an upcoming 7” with Robot (re)pair on Night Animal Records, and writing the rest of what will be the next LP. We have a quick little weekend tour in the Carolinas in September, and after that hopefully more consistent regional touring.

Posted by Audio Ammunition at 11:13 AM