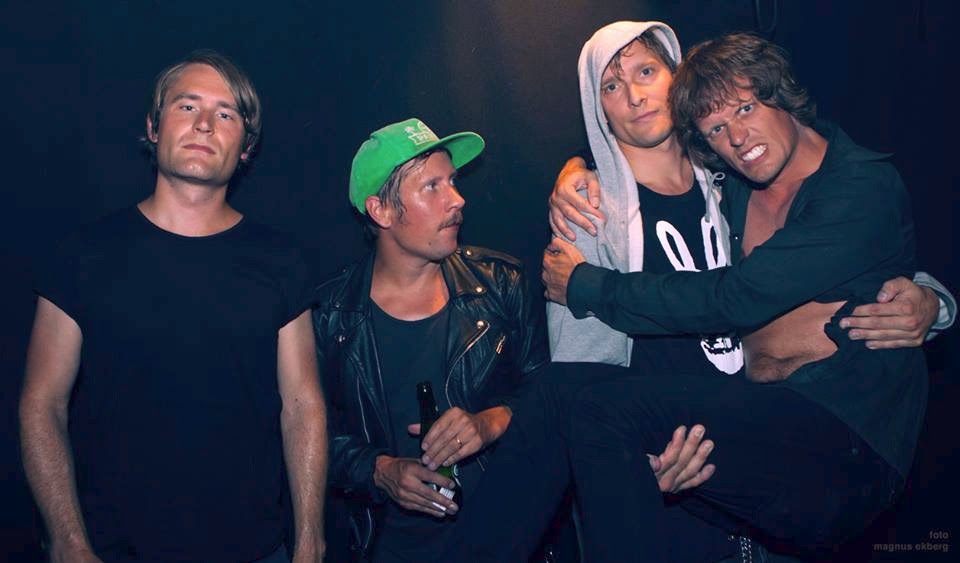 In Sweden, The Makeouts have already won one music award, The Swedish Independent Musicprized Manifest, for their LP In A Strange Land! Now with their follow-up, Back To Sleep, they are up for a possible repeat. Not bad from the self-proclaimed “Worst Band Ever.” It’s been ten years since The Makeouts inception and in that time they have created their own brew of pop, power-pop, garage and punk, which upon listening sounds so effortless you would swear, they were born, doing it.

Where is the band from?
J: We’re from Stockholm. We all live scattered around town. When we first started we all lived in Täby (a northern suburb) where we grew up. We still rehearse there and both Nicke and Patrik still lives there.

What is the punk/garage scene like in Sweden specifically Stockholm?
J: There is, and have been a lot of great bands from here. And it’s pretty friendly among the bands. If we have to name the most important persons for making the scene so great it’s Mr. Thomas Savage and Lotta who run the store and label Push My Buttons. They throw the most amazing parties and make sure all the great touring bands come and play here.

When we stumbled on the “scene” there was bands like Locomotions, Sons Of Cyrus, Meine Kleine Deutsche, Skelett, The Heartattacks, Henry Fiats Open Sore and Dixie Buzzards. And without Dixie Buzzards there wouldn’t be any Makeouts I think. That was when I got the idea that I could do this too, or I want to do this too. They we’re great and raw – like a train without brakes.

Current bands from here include Holograms, Martin Savage Gang, L’obscurite, Growth, Impo & the Tents and many more. We’ll give you the full tour if any of you travel to Stockholm.

Give us a quick history of Makeouts.
N: Okay, so Jakob and I were out skateboarding when the idea of playing together came about. There was no talk of a band or anything, but beating the hell out of a cheap guitar and a borrowed drum set in a basement seemed pretty awesome. Jakob however, smooth talked some people and poof, show booked. At that time we asked Patrik to join in to hold this fragile little structure together. First show, four songs in like three minutes. Played some more, met people, more shows, records, things got a bit tricky being three so Patrik’s brother joined in to. Basically that's who we are today.

What was the idea behind self-proclaiming Makeouts as “the worst band ever” or was it something to go with the “Worst Band Ever” single?
J: When we started out, we couldn’t play. And we we’re late bloomers, and I mean REALLY LATE. We know we were on to something, and we really liked it and we were having a lot fun doing so, but in comparison to all the bands we played with or listened to I always felt like we were miles apart. And all that stuff is pretty primitive! I never aspired to be a great player, but I had all these ideas and sounds in my head – and I couldn’t get ‘em out the way I wanted. And all the others sounded so good! So the “worst band ever” was kind of a shadow of that, and then us just putting it out there.

It all happened so fast in the beginning too, I mean our 4th show was in London, England on small tour. I probably had played guitar about six months then. I remember Nicke couldn’t eat before the shows – he was so nervous he was feeling sick, but we had a blast and people were enjoying it. This was the summer of 2005. We overcame the nervousness pretty fast, but the feeling of not being able to get my ideas like I want them still hits from time to time. Since then Nicke changed from drums to guitar, and we’ve gotten better at playing our instruments and at communicating our ideas, so we can help each other to getting the ideas closer to what we’re hearing in our heads. We can’t steer it all that much. Songs seem to write themselves.

Have you seen Spinal Tap? They have a record called Shark Sandwich, which got a two word review that read: “Shit Sandwich”. And with the title of our first 7”, Worst Band Ever we could have made history with just having a one-word review: “Yes.” I always think about Spinal Tap when we’re naming records. I mean the Back To Sleep title can invite to some pretty mean reviews as well. But we’ve only gotten raving reviews so far. We’re glad that people seem to like it!
Name five records that you can’t stop listening to right now?
Video – (Join The) Hatewave
Black Time – Blackout
Gun Club – Death Party
Bob Dylan - Highway 61 revisited
The Spits – Kill the Kool

Do you think music can still be a vital force in such a disposable age?
J: Yeah, I think music will always have some importance to people as long as we still have feelings. As for it to be a vital force, yeah I think so. Interest in music seem to hit us when where most vital and receptive in our early teens – so it’ll always be the soundtrack to future generations. And with bad times, great music seems to be made.
In A Strange Land! won the Swedish Independent Musicprize, Manifest for best rock album of the year. Now Back To Sleep is up for awards. How excited are Makeouts right now?
N: It´s a pretty big thing for us obviously, but it´s important to see it for what it is. You can´t listen too much to other people’s opinions or it may start to interfere with whatever it is you´re doing. But I do like hearing that the songs we´ve made actually matter to other people. Music has always been around to help me through good and bad days.

50 years ago people used to buy music and get their water for free, now people pay for water and get their music for free. How do you think this affects music in any way?
N: That´s interesting. And disturbing of course. I guess record companies may not be too interested in owning a product that has no value so to speak. They´ll find there way somehow I’m sure. But we’re not the right people to ask. We´ve never seen any chances of earning any money from the music we make and we don't care either. I think for us, that's even a good thing. Money is not a strong motivational factor for creativity. Where money goes in, art goes out. There´s a lot of obvious examples of this. But on the other hand I think it´s sad that people with the ambition of living off of their music will have a real hard time doing so without compromising too much. Mixed emotions here but it doesn´t really affect us as a band that much.

Almost 10 years, Makeouts sent their demos to Bachelor and now Back To Sleep is released on Bachelor Records. Seems like the band has come full circle in a way. What was the decision to go with Bachelor again?
N: Yeah, ten years. I can´t remember what it was like before we started this band. It´s like a family business by now. Some of us are actually related too but that's a different story. And talking about labels, we are just really happy to work with Elmar and Bachelor Records. For starters, Bachelor Records is a pretty awesome label that puts out great stuff so being on it is a privilege. And further Elmar has been like the older brother that kept a watchful eye on the playground as we were growing up as a band and I guess he still does so in a way. We had a few of those older brothers actually, of course we´d then have to mention Thomas and Martin Savage, and Eric “Baconstrip” Boitier as well. And Black Time. Those guys and several others may be the reason we exist today I think. Their support especially in the early days made us grow and gain some confidence. When you start a band from scratch like we did, without any experience and totally unheard of, I think one thing that will be totally key is having people that support your work by booking shows and putting out records. And your mom just doesn't cut it here unless she´s a total music freak that has a popular blog or a record label.

Where can people hear Makeouts and what is next for the band?
J: We’ve got two new singles coming up, one on the Swedish, Radio Obligato Records and one will be a self-released “limited buy from the band only” type of thing. We recorded all those songs with Stefan Brändström (Frank E. Male) from Henry Fiats Open Sore in his Dustward Studio. It sounds dope! Lemmy Caution from Black Time described it quite good. “[K]ind of has an punk vibe with chanted multi-part vocals, but then also a bit psychedelic with the dubby echo effects - Sham 69 meets 13th Floor Elevators!”

N:  If you wanna see us live I guess an invitation is a good start. We really like playing shows, preferably out of town. And drop us a few lines if you want to get in touch for whatever reason. Say hi if you´re at a show.

J: And I hope we’ll start to think about album #3 soon, but it’ll have to wait a little while. We also have some goodies if any label is interested in doing a little something something.

You can follow us on whatever is out there, Facebook, Spotify, Tumblr etc. to get the scoop.

Posted by Audio Ammunition at 5:33 PM