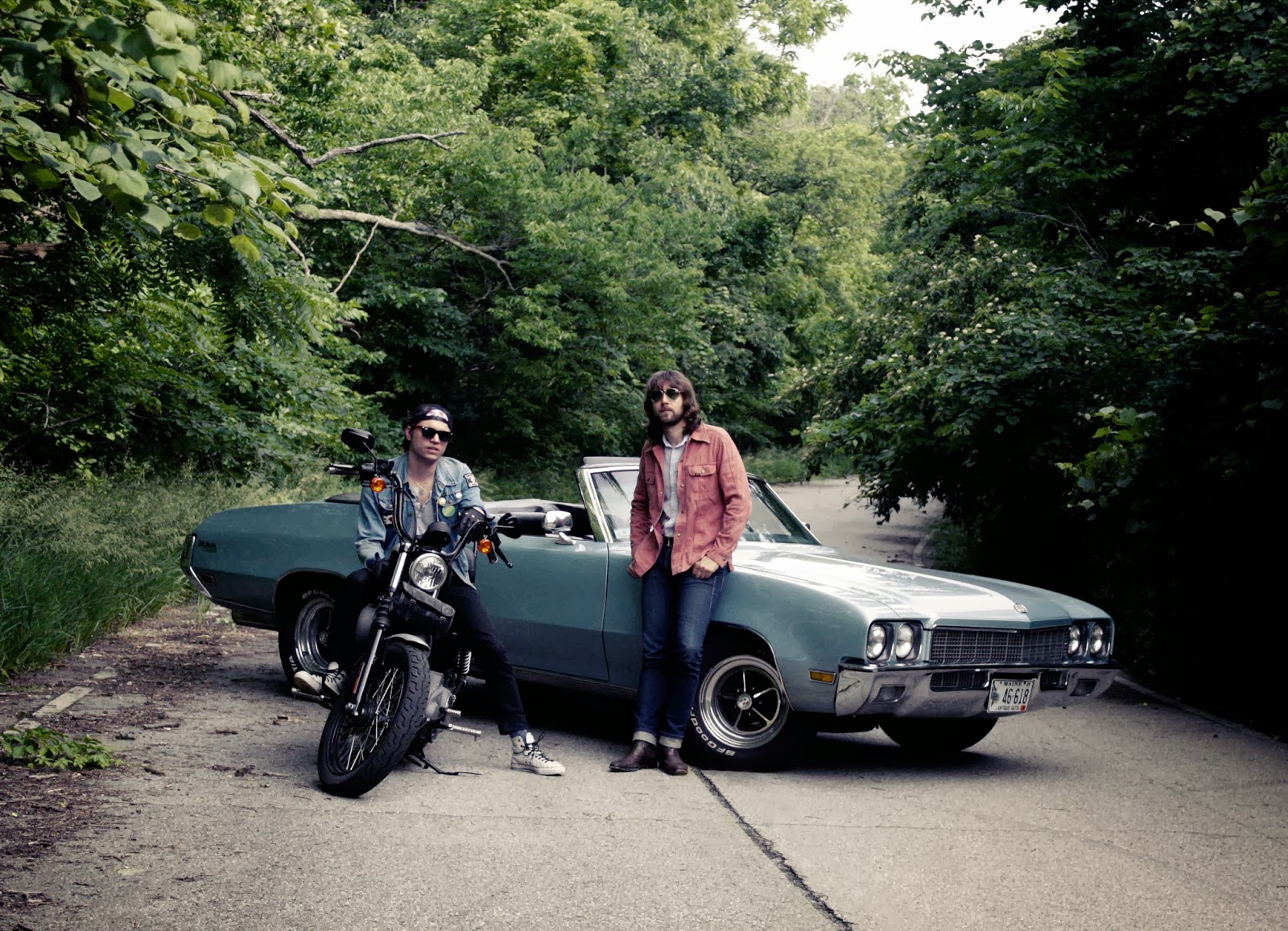 Josh Berwanger got his start in The Anniversary. A band that is as equally noted for helping brings attention to the burgeoning pop/punk/emo scene from Kansas along with The Get Up Kids. After The Anniversary called it quits and Only Children stopped making music, Berwanger “was burnt out on music and needed a break.” While coaching high school basketball, taking graphic design classes and reconnecting with his musical past, Berwanger wrote the songs for Strange Stains, which covers a personal landscape of  “love, heartbreak, idiots, and continuing to pursue what you love to do, no matter how hard that shit is.” Strange Stains equally influenced by T. Rex, 70’s glam, American Power pop and ‘60’s pop.

Where is the band from?
Nilbog, Kansas.

Who is in the band and what instrument do they play?
Josh Berwanger - vocals, guitar
Michael Hutcherson - Drums
Zach Shoffner - Lead guitar
Brian Klein - Bass
Margo May is currently touring with us singing backing vocals

How did the band start?
I was going through a tough divorce, currently taking classes and dreading them. I started to really focus on songs I had been working on. Michael randomly contacted me from Maine and asked if I had been working on music. I sent him the songs I had originally intended to be mainly acoustic guitars and percussion. He sent them back with drums and it sounded really great. That is how the band started.

For the last seven years you were coaching high school basketball?  What made you want to take a break from music for a while? The Anniversary called it quits during a tour and Only Children last release was 2007.
I was burnt out on music and needed a break. I still wanted to surround myself with something creative and be part of something where I could help influence people and be influenced in the same light, basketball was something I knew a lot about and had an opportunity to coach it. It was that or continue to sit in my Mom's basement watching Alf re-runs on VHS.

Do you think music can still be a vital force in such a disposable age?
YES! The only way it isn't is if a person believes it isn't or if they believe the hype and buy into the disposable waste of trash music, whether it is the terrible shit on the radio or commercials, which it seems most bands strive to get their music on. It's like driving down the highway and seeing a billboard with a diamond ring on it and the slogan says, "She will say yes!"  Oh cool, so I better buy that particular ring.

In Lawrence.com, you said about Strange Stains, "It's an honest and truly sincere rock and roll record. It's a record that speaks about love, heartbreak, idiots, and continuing to pursue what you love to do, no matter how hard that shit is."  Can you elaborate a little more on this quote? Is a Strange Stains meant to be a return to force for you?
The album lyrically is about where I’ve been, what I’ve seen, how I see the world. There are a lot of lyrics that you can look at and possibly think they are sad but really its about how to feel the change from getting through the experiences and moving on to being positive and believing in yourself and not letting the "shit" get in your way.

What bands were inspiring you when you were writing Strange Stains?
Ratt, Horror movie soundtracks, Tyrannosaurs Rex, Rolling Stones "Black and Blue", Ron Wood, Cinderella, Ralph from the Muppets, Mean Jeans, Groundhogs, Crow, Alice Cooper, Howdy Moon, Davy Graham. That would be a day of listening and it might change the next day. I'm always listening to music, always searching for new music.

A lot of Strange Stains reminds me of American Power pop as well a lot of 60’s pop. Which musical period would have rather have played guitar in?
I'm fine with this period, I have no idea if it was as challenging in the 60's, I'm sure it was because I listen to a lot of bands that never "made it" that were amazing. I think there are negatives and positives to every decade so all I can really do is focus on doing the best I can in this time period.

Did you ever finish your graphic design program/degree?
I was in the Johnson County Community Graphic Design program, which is amazing and has some of the best teaching I have been surrounded by; I have about a semester left. I may one day finish the course. I met some really rad people who I am now friends with and they inspire me to do better in whatever I'm working on. I just very much dislike sitting in class and was spending too much of my time dreaming about music and making music instead of giving 100 percent to getting better at GD. 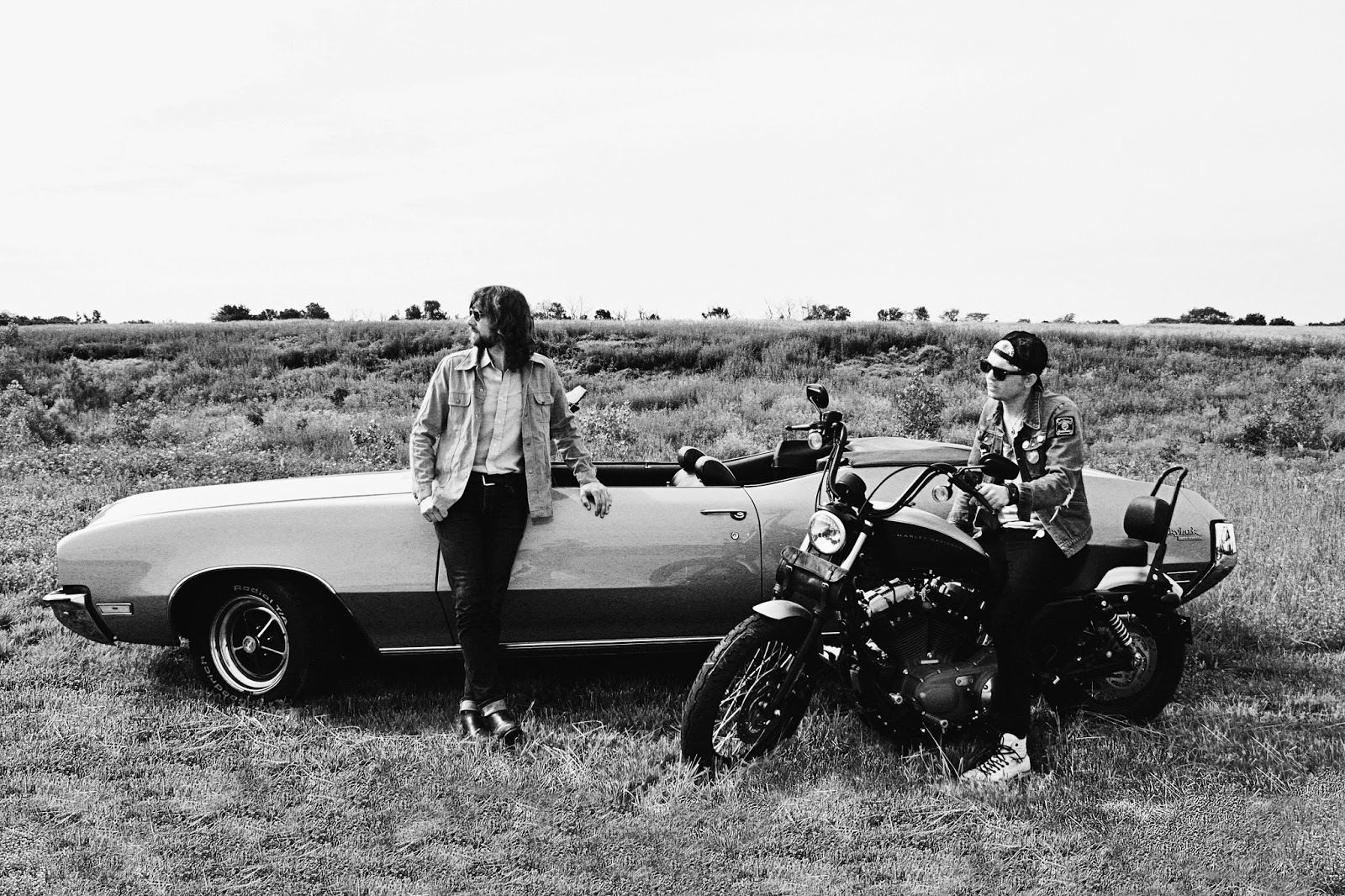 50 years ago people used to buy music and get their water for free, now people pay for water and get their music for free. How do you think this affects music in any way? Do you have a different take on the music world since you have had a few years break?  What are some of the differences you notice between now and when you were in The Anniversary?
Ha! So true. I texted someone who said let me know when your album is out, so I did, and they wrote back "just waiting until I can download for free", and they were serious. I was like fuck, that sorta sucks. I don't think people realize the difference between a band trying to make a career out of it and a friend's band that plays for fun on the weekdays. I also don't think a lot of people realize for the price of a six pack or one meal they can purchase our or any other band's album striving to make a career in music. The Anniversary really paid attention to every detail from lyrics to the art for a tour poster; it needed to be approved by us. That is how Michael and I approach everything. I believe you need to have a plan, you need to have artwork that catches people's attention, every detail needs to be thought out and the band needs to have a reason why it works and why it makes sense for them. Its very different and very hard with so many bands and so much to choose from and so much to give your attention to and let your attention be robbed by.

Why did you utilize Kickstarter to help put out the LP instead of sending demos to labels?
Oh, I was sending demos to labels; I was very persistent and annoying to many labels. After a while I just needed to get the album finished. I had spent a lot of money on the album already and needed to get it mixed, mastered and wanted to record two newer songs I had written for it. After I had the full package done and the help from the Kickstarter I was able to send a better representation of the songs to labels and suddenly had 3 different labels interested.

In Downrite you state, “There’s this part of me that really wants music to be normal again. I don’t even know what I mean by that exactly, but I know what normal isn’t—designer outfits, fireworks, synthesizers everywhere, crazy gimmicks. I don’t know how to relate to that. I want things to be more like Nirvana. I want to make rock and roll. I want to make something honest.”  Some of what you describe is reminiscent of the 80’s music especially hair metal or MTV influenced new wave. What would normal be?
It's funny because I love a lot of that metal from the 80's and it did get out of control, but the bands I like from that era like Motley Crue, Cinderella, Ratt their influences were rad power-pop bands and blues bands and I truly believe they have legit songs. You could also say the same thing about the New York Dolls or Alice Cooper but they were doing it for the sake of art and doing something different to get a reaction in a way that was rebellious and thought provoking. Now days the bands I am talking about in that statement don't have "songs" and they are doing it to conform to what they believe the audience wants to see, trickery and American Idol barf-fests. I used Nirvana as an example because they got up and played their songs and were the most popular band in the world, and playing their songs was good enough.

In Modern Vinyl you stated, “Most kids these days listen to twenty seconds of a song before they hit “Skip.” They do it because the song sucks. There is no soul in it. They listen to it because they’re told that they should like it. And they end up listening to twenty seconds of all these songs they don’t actually like.”  I remember reading an interview where you talk about how this student response influenced some of the songwriting. Can you talk about that?
That's part of the definition of Strange Stains to me. I coached a girl from freshman to senior year. When she was a freshman she loved the Jonas Brothers...was obsessed!!! I bet her by her senior year she would be completely embarrassed she ever owned anything "Jonas", guess who won the bet. There are some songs on the 'Strange Stains' album that are inspired by brains being washed by TV shows and popular music that make people dumb, particularly in "Gypsy Girl and the Tombs of Atuan".

Where can people hear Josh Berwanger and what’s next for you?
We are touring the East Coast, doing CMJ, AudioTree, Daytrotter, then touring the West Coast in November. We are currently working on a new Air Bud script and a re-make of Encino Man that is shot for shot like the original, with all original cast except Encino Man is replaced with a man in a Gorilla suit with Hawaiian shit and martini glass.

Please spread the word.
You can buy on iTunes here:
https://itun.es/i6xC5J6

Or go get it on Vinyl or CD here:
http://goodlandrecords.bigcartel.com/artist/josh-berwanger

Posted by Audio Ammunition at 5:17 PM