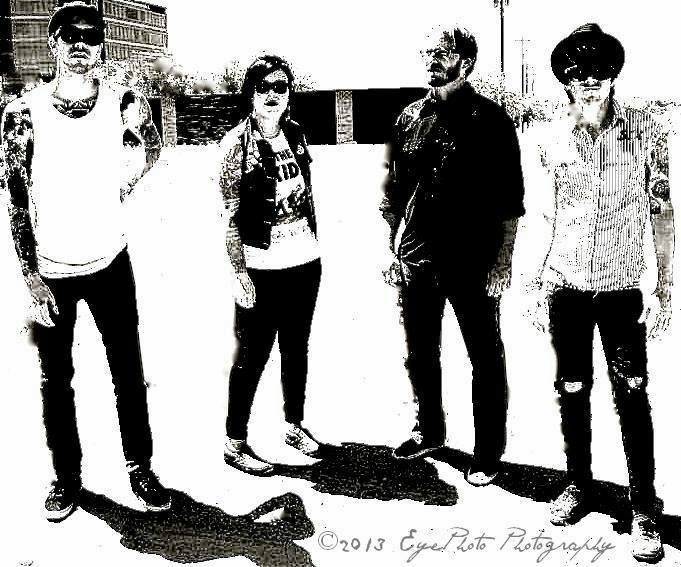 I like to try to describe a band’s sound just so the reader can have some clue of what they’re reading about.  With a band like The Sex, it makes this task a tad difficult.  The AZ punk trio just self released their second EP in June of 2013 and it’s all over the early punk rock spectrum.  It has hints of melodic Stiff Little Fingers riffs; the vocals sometimes remind me of The Violators, all delivered with Sham 69 urgency.  Everything else you need in the mix that makes a punk band enjoyable is in there too, but I’ll stop here.  So never mind the labels…here’s The Sex!

KM: I’m Kate Mexal, my job is vocals and writing lyrics. I am completely incapable of playing an instrument.

Chadd: I'm Chad and my weapon of choice is the drums.

Where are you all from originally?
CO: We’re all pretty much from Arizona.

KM: I am from Gallup, New Mexico originally, but I have been in Phoenix for most of my life at this point.

Chadd: Born and raised in the desert.

What is the bands origin story?  How did you all meet and start playing music together?
CO: Kate and another buddy of ours, Harley, started the idea of the band before I was in it. As soon as I joined we wrote our first song “Without You”, I was about 19 or 20. Harley and I were both playing guitar and trying to write songs with Kate singing and writing the lyrics. Tried out numerous drummers, one of which had a portrait of Hitler tattooed on his back which was NOT cool. For safety precautions, I changed my phone number after we kicked him out. Then we ran into our friend Jeff who became our first drummer, and made Kates husband, Bobby, play bass for us. Harley left the band for personal reasons. So after jamming with just the four of us, we got offered our first show, put on by our friend Rikki X. The first show was with The Joneses in ‘08 which was a huge honor for us. Started getting more gigs after that and getting known around our city. After a few months, we split ways with Jeff and Bobby, again for personal reasons.  Then I asked my old friends Gerson and Chadd to be in the band. I’ve known both since high school and have been playing music with them before with The Prosthetics.  Gerson took over on bass and Chadd took over on drums. They were a perfect fit as soon as we started jammin’. We soon started playing bigger shows and getting more known throughout the music scene. We planned a tour and we were ready to go, then 1 week before our tour, the van we were going to use was sold! Super bummed still about that.  Around late 2009 I was getting sick of living in Arizona and had to get out. I moved to Chicago and left The Sex, which was a huge mistake. I was gone for a couple of years, moved back to AZ January 2012. As soon as I moved back, I got the band back together. Everyone in the band was in and willing to play except our bass player Gerson. He had just started his new company and was too busy. We understood his situation so we went on to a new bass player. Around May of 2012 we were introduced to Eric Jones who is now our current bass player. We’ve written a new album with him and starting to get amazing gigs. Trying to put out this vinyl and plan a tour soon. So long story short, that sums up the origin.

KM: It is impossible for me to elaborate on that beautiful origin story Casey.

You mentioned in a description of your new record Wet Brain that each track has a different sound.  Was this done intentionally or is that just how the songs came out?
CO: It was definitely not done intentionally. I write music on what my mood feels like at that moment. I remember writing a riff in my head while having sex. Just kidding, I’m not multi-talented like that. Anyways, I put a lot of effort into writing songs and make sure each song has a deep feeling and connection to it. I hate it when bands write filler songs for their album and it makes that album suck.  I try and make sure each song sounds as awesome as I can make it.

KM: My only regret is not writing a song with filthy, depraved lyrics for this record. I was on a roll with the last album, so I am working towards writing some more explicit love songs.

Chadd: Every time Casey would play us a riff Eric and I would do our thing to it. Then we make our songs blend but we are able to all add our own style which makes each song different and unique. Kate's lyrics also change the way the song is heard.

You mention that the band has been through some hardships in the recent past.  Do you care to elaborate on that?  Maybe there’s a lesson to share here?
CO: As any band we have had a few potholes, bumps, ice and cracks in our road. A lot of those stories we usually keep to ourselves. But my message or lesson would be; A band is like a family, no one likes seeing their family members, or friends, slip into a dark haze of drugs and alcohol. Think about the other people that are close to you and what you are doing to yourself. It benefits NO ONE and makes life a complete waste. Life is not a horrible event; it is an amazing adventure.

Chadd: We've had a few line up changes here and there. That's about the only hard ships I care to mention. What Casey said. 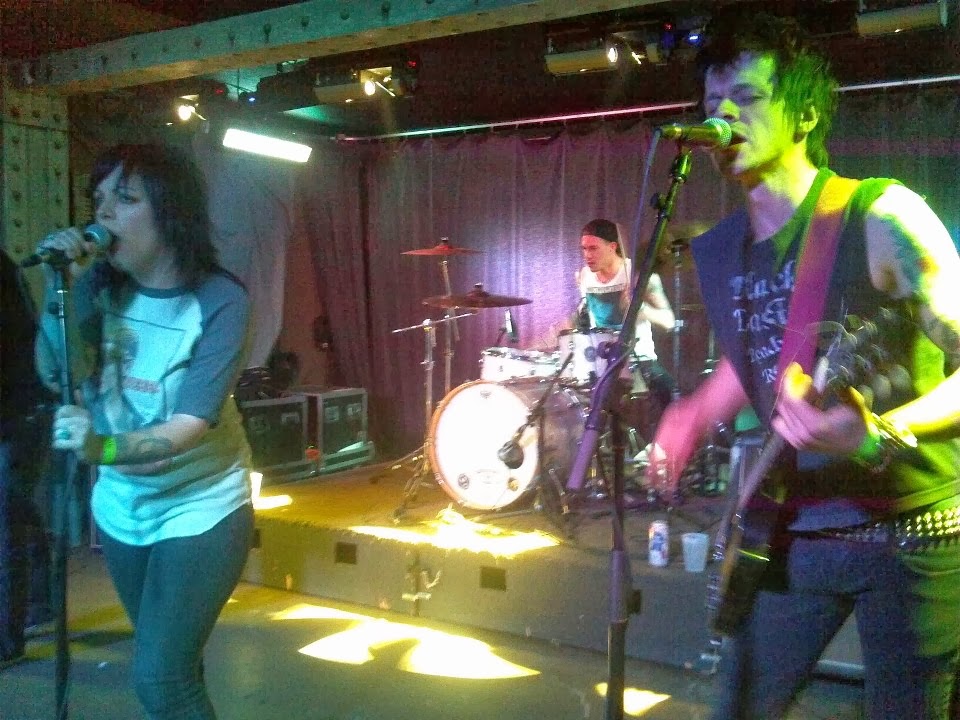 I recently read an interview with Keith Richards saying that anyone buying digital music is getting short changed.  Do you agree with this and if so, why?
CO: I do agree with that 100 percent. I believe when people buy digital, they don’t get that full sound of vinyl. They don’t get that smell when you open up that record and the sound of the needle sitting in between those grooves. It’s a beautiful thing. But unfortunately, there are not enough record stores to go around. People are sometimes forced to buy digital because there is no other choice. Like for example our album, but not for long because we will soon have vinyl. I do think digital has its benefits though; it is incredibly easy to promote and send it out to interviewers or promoters.

KM: I have always agreed with the notion that the album (shit, even CD), is part of product that you are purchasing. I can’t imagine my adolescence without me lying on my back looking at record sleeves and having to get up to flip the record over and over. Going to the record store was the greatest experience for me, and the younger kids are never going to know that. On the other hand, they have access to way more music than I could ever have imagined and it’s right at their fingertips. Spoiled little shits.

Chadd: I mean you’re paying $10 for a picture on your iPhone is definitely weird. Technology is changing a lot with bands and music. I prefer vinyl, cassette or a CD but its not always that easy putting your own music out there when your entire band fund is from your own pocket. Accessing things digitally is easy, simple and quick.

What has been the most memorable show the band has played good or bad?  Where was it and what made it so unforgettable?
CO: Our first show with the Joneses was the most memorable. We played with Vice Squad and that was also a huge honor. And playing with Lower Class Brats has been awesome. Every band we’ve played with has been a great time. Our shows are usually pretty fun, except for a couple.

KM: Definitely the Joneses for me. This was my first time playing live, and to get to open for a band that I loved was amazing. I mean, who gets a first show like that? Also, because I was scared shitless and the memory is burned into my psyche.

Chadd: Playing with LCB is always cool. Jammed a warehouse show with our homies the Downtown Struts that was a good time. Tomorrow we play with Sonny Vincent, that's going to be tight.

If you guys could tour with any band/musician from times gone by, who would it be and why?
CO: Jimmy Buffet-  I’M KIDDING! I would love to tour with The Cure or Descendents. They are a huge influence to my writing and its just two main bands I grew up on. If I had the chance to be really picky about it, I would love to tour with The Sound, Sisters of Mercy, Sad Lovers and Giants, Generation X or The Chameleons. That style of music just gives me the chills and I listen to them almost every day.

KM: Obviously there are a ton of bands that I would love to tour with, but the number one for me would be Rose Tattoo, mostly because Angry Anderson is my hero.

Chadd:  I could list a million bands I'd love to share the van rides with but all in all I think doing any tour with any band that loves what they do as much as us would be super sick.

I don’t like using the term “guilty pleasure” because I don’t think anyone should be made to feel ashamed of anything they like.  However with that being said, what to you listen to that you think a lot of fans may be surprised by?
CO: Ummmm, on a stressful day, I’ll put on Mozart or something just to calm down.  A better answer, I like Green Day like 90’s stuff a lot. Same with like NOFX or Bad Religion.  All of their older stuff is pretty good and I enjoy listening to it. I have one deep secret but I’ll take that to the grave.

KM: Wow that is really gross Casey. I guess for me it would be my love for Mariachi music, I get downright ecstatic when I hear it.

Chadd: I'm with Casey on liking Mozart. I like Bruce Springsteen, Jimmy Hendrix, The roots. Take it as you will.

What music have you unleashed on the world and where can people go to hear it or buy it?
CO: We have all of our stuff on Bandcamp right now. You can go to our Facebook page or the actual Bandcamp page. Like I said earlier we will have vinyl coming out soon.  www.facebook.com/thesex77  or www.thesexaz.bandcamp.com

What does the band have in store for us in the near, or not so near, future?
CO: Wet Brain LP Vinyl. A tour this year. We are writing more songs as we speak so expect more music out this year as well. Our Facebook page is updated weekly with what we are doing and where we are going. Thanks for letting us answer your questions!

Chad: Quality shows over quantity. New songs, new covers, out of state shows and touring will be nice. I'm down with making more live footage or videos.

Posted by Audio Ammunition at 8:06 PM