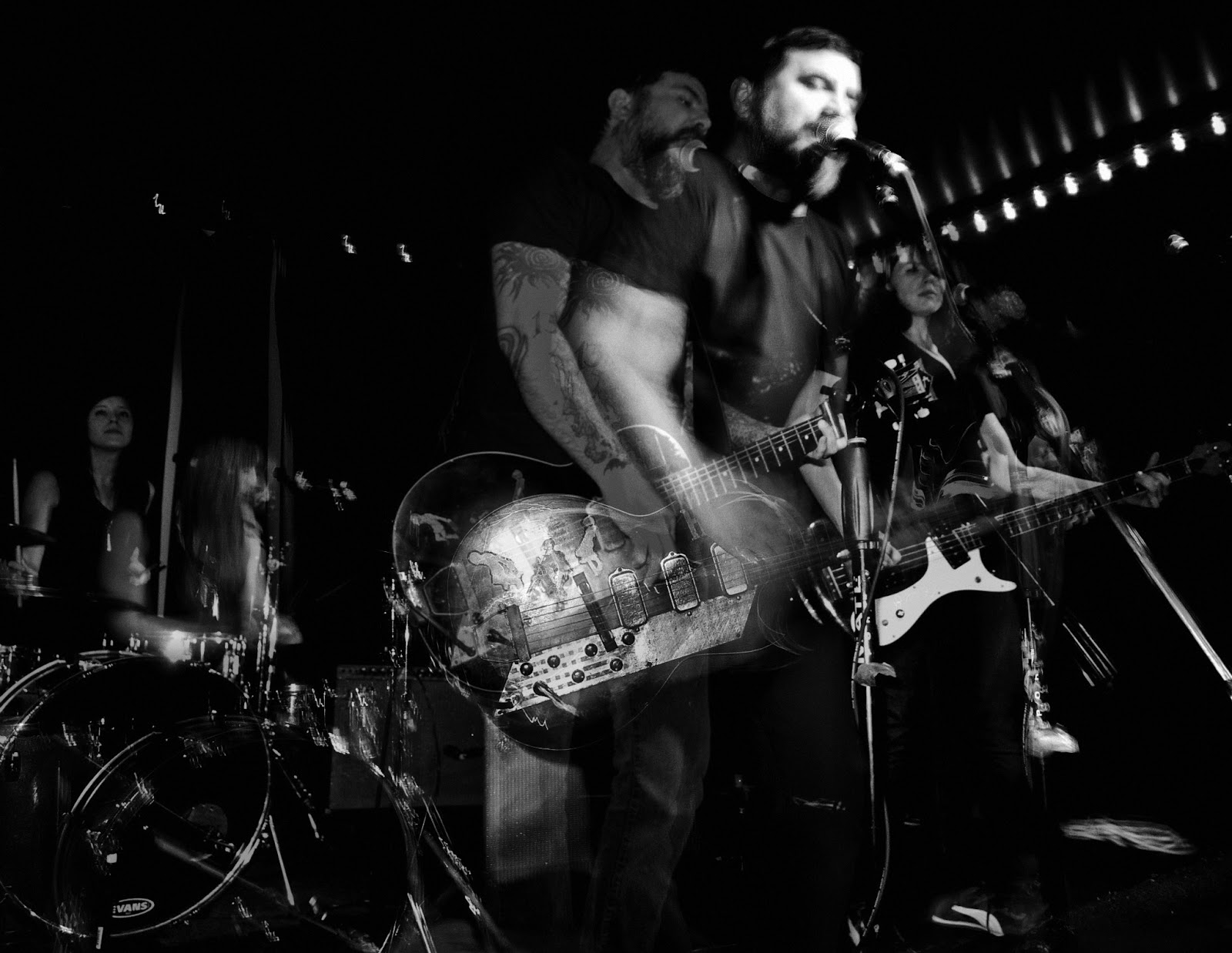 One can take any given Hex Dispensers song and create a very good screenplay out of it.  The song’s lyrics put you into the skulls of paranoid, delusional individuals straight out of a Coen Brothers movie.  Or it can plant you into the desperate situation of a science fiction calamity.   All of this is delivered with one of the most contagious brands of garage punk combusting in the universe today.   The music rockets into your psyche and forces you to beat your feet and shimmy your shoulders like you’re under some kind of Haitian Voodoo trance.  The full meaning of the name Hex Dispensers has now become clear to me.  I’m going to go find my copy of the Serpent and The Rainbow now.

Who is in the band and how do you earn your keep in it?
Alex Cuervo - guitar/vocals
Alyse Mervosh - drums/vocals
Rebecca Whitley - bass/guitar/vocals

Where are all of you from, originally?
The band is from Austin, TX. I'm originally from El Paso, TX. Alyse is from the Washington D.C. area, and Rebecca is from Houston, TX.

What is the bands origin story, how did you all meet and come together?
We had our first rehearsal on 06/06/06 (Really!) Original lineup was myself, Alyse and Tom "Kodiak" Micklethwait (who recently left the band to focus on his amazing BBQ business, Micklethwait Craft Meats). The three of us had been playing in a band called This Damn Town which was winding down and we wanted to keep playing together, so we started this one. We were later joined by David Bessenhoffer on bass. Tom and Dave left the band around 2010 and Rebecca joined on bass. Tom re-joined for about a year, but left again, so now it's back to being a 3-piece.

I’ve seen an interview of you guys talking about the original sound of The Hex
Dispensers being nothing like what actually came out when starting to write and
play songs. What sound did you have in mind when starting out?
I guess initially we talked about something between the Coachwhips and the Marked Men. The raw, fucked up, blown-out quality of the Coachwhips mixed with some of the more refined songwriting and precision of the Marked Men. I can see where we were trying (on some of the early stuff), but the end result became something totally different - mostly because we couldn't pull off that recipe. Not in our wildest dreams.

Tell me about alexcuervo.net and what is it all about? What inspired you to go into
that musical direction?
It's been a longtime dream of mine to write music for films (and television, and video games), and I started getting really serious about it a couple years ago. My day job is writing custom music for clients (advertising/digital, etc...), but my long-term goal is to write music for films/tv/games all of the time. I also do some graphic design and print production freelance work, but lately the music work is more frequent. So far, I've only scored a couple short films and have licensed music for a feature film. I'll be working on scoring for my first feature film this summer - an experimental documentary called Yakona that I'm very excited about. I'm not the primary composer on it - but it's a really ambitious and creative film and I'm blown away to be involved with it.

You recently contributed music to the film “Bad Kids Go To Hell”. With that, plus
the mood of Hex Dispensers records, I am guessing you are fans of Horror movies
and/or books. What are some of your all time favorites of the genre?
Yeah - I'm big into horror and science fiction films/books/comics etc. I strongly prefer supernatural horror or monster movies to the slasher/torture porn kinds of films. I'd say I really just like genre films in general, be they sci-fi, horror, suspense, fantasy or whatever. I guess it's important to point out that we don't really consider ourselves a "horror rock" band, as I'm really not into that aesthetic at all. I just write about stuff that interests me, and the whole spooky/occult/supernatural thing just comes naturally to me. It's hard to pick favorites, I mean I'm crazy about all the classics, like the Shining, the Exorcist, Night of the Living Dead, etc. Some recent films I've really enjoyed have been Cabin in the Woods and Drag Me to Hell. Believe it or not - I really really liked the remake of Evil Dead. I think everybody that's hating on it thinks that they're "supposed to". I found it really well made and totally in the spirit of the original. Lot's of reviewers keep making the rookie mistake of comparing it to Evil Dead 2 instead of the original Evil Dead - which is super annoying.

Who inspired you to learn how to play music and pick up an instrument in the first
place?
Wow - it's a really long list! I've always wanted to play music since I was a really little kid, but I never had any kind of lessons or instruments. I just banged on upside-down trash cans or whatever. Back then I was all about Foreigner, ELO, Queen, or whatever my big sister was listening to in the 70’s. As time went on I discovered skateboarding, which turned me onto punk rock and then it was just a matter of digging up whatever I could find, which in El Paso Texas in the mid 80’s wasn't super easy. Once I discovered magazines like Flipside and Maximum Rock & Roll, I just mail-ordered tons of stuff as I could afford to and it grew from there. By the time I was 16 I was playing drums (badly) in a punk band, and then I went on to sing for another one and I've been at it since.

If The Hex Dispensers could tour with any band/musician from times gone by, who
would it be and why?
Hmmmmm... It's a tricky thing you know, because I could say Black Sabbath, and it would be crazy and decadent, but we would have been booed off the stage every night - so where's the fun in that? I guess the Ramones original lineup would be great just because it would be so awesome to see them that much - and we'd be less likely to get booed, but we'd play a really short set and get the hell out of the way as quickly as possible.

I recently read that out of all different art forms, music has the power to alter a
person’s disposition the fastest. Do you agree with this? Do you have any favorite
music that you can put on that will always lift you from a slump?
I totally agree. It's weird, that sometimes if I'm down in the dumps - I like to listen to really sad stuff. I just hunker down and let myself get super bummed out, and let it pass through. I have a playlist of go-to songs for just such an occasion. "Goodbye" by Reigning Sound really gets me super sad. Beautiful song. "The Grand Tour" by George Jones is another one on the list. If I'm feeling aggro or exercising (neither of which occur all that frequently these days) it's kind of a mix of grimy/weird hip hop like early Wu-Tang or Death Grips with pseudo-metallic hardcore like From Ashes Rise or Black Breath.

I recently read an interview with Keith Richards saying that anyone buying digital
music is getting short changed. Do you agree with this and if so, why?
I like vinyl for it's tangible quality - but I'm a digital convert. I love making playlists and having a ton of music on me all the time. I'm not a purist at all when it comes to fidelity - so digital is A-OK with me. Alyse and I will still spin records while we're having brunch at home or on an occasional Friday night, but mostly - we listen to digital music.

I don’t like using the term “guilty pleasure” because I don’t think anyone should be
made to feel ashamed of anything they like. However with that being said, what to
you listen to that you think a lot of Hex Dispensers fans may be surprised by?
You're right - "guilty pleasure" is a stupid concept. If you're ashamed of liking something then you're too worried about what other people think, and that's shitty. Just stop it. Like what you like and stand up for it. I listen to a lot of film soundtracks and instrumental music because it's what I want to do. I'm just as likely to be listening to Clint Mansell, Explosions in the Sky, John Carpenter, or Mogwai as I am Black Flag, Devo, or Thee Oh Sees. I like a really wide range of music: 60’s soul, 70’s Country, Psych, Hip Hop, Hardcore, New Wave/Darkwave/Goth, Industrial/Experimental, Delta Blues/Folk Blues... all kinds of stuff. I tend to gravitate towards dark, or somber/melancholy kinds of music - but I cast a pretty wide net.

What music have you unleashed on the world and where can people go to hear it or
buy it?
www.thehexdispensers.com - Most of the Hex Dispensers discography is there, as well as some solo releases of mine, and my instrumental electropunk side-project: Espectrostatic.

What does the band have in store for us in the near, or not so near, future?
We're planning on recording a 7" this summer, and we'll be doing a short European tour the first week of September, but other than that and playing Chaos in Tejas - not much is planned. We don't play all that often. I'm working on an Espectrostatic LP which is all instrumental and kind of late 70s/early 80s sci-fi/horror film soundtrack type stuff. Alyse and I are also thinking about starting an instrumental band, but it remains to be seen if we can pull it off or not.

HEX DISPENSERS - My Love is a Bat (OFFICIAL VID) from Jon on Vimeo.

Posted by Audio Ammunition at 8:46 PM