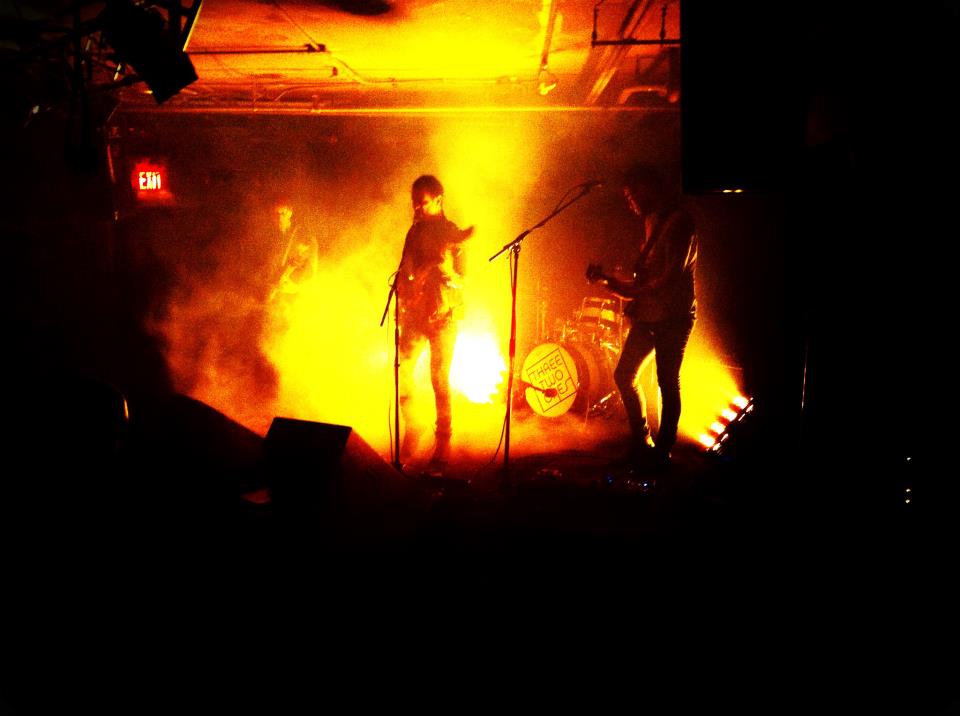 Who is in the band and what instrument do they play?
Jimmy Moran - Vocals and Guitar
Phil Robles – Guitar, Backing Vocals
Billy Parkinson – Drums, Backing Vocals

How did the band start?
I had a few tunes and rounded up some dudes. It’s been kind of a nightmare!

One of the interesting things about Three Two Ones is that you have two different styles blended seamlessly in the songs. At some parts it reminds me of early Psychedelic Furs and other times more power pop. Can you name some bands and LP’s or 45’s that have had an influence or impact on Three Two Ones songwriting and sound?
Ha, yeah I guess Jenny sounds kind of power poppy. We’ve heard that a few times. I hear more of a Replacements feel in that song, yeah right, I wish. The others tunes are influenced by the cool punk, psych, & melodic bands we all grew up on. I think a good recipe for a good song is catchy & melodic music with just the right amount of middle finger in the lyrics which in our case is a lot.

I find it interesting that there a lot of people that have previously played in more aggressive bands that are secret pop lovers. Jimmy, you were in Discontent years ago. Before Three Two Ones had you wanted to start a more pop influenced band?
I played in Discontent from 1998-2004. Good times with good pals! I’ve played in several other punk bands as well. Phil played in Cheap Sex and Billy was in The New Fidelity.

Do you think music can still be a vital force in such a disposable age?
Yeah, I think good music is powerful and timeless. I think it’s all been done as far as innovative rock n’ roll goes. Seems bands are picking bits and pieces from different decades and genres that they like best. Take a look at The Black Lips. They started just playing 60s lo-fi garage and have slowly evolved into a 60s/modern indie kind of thing. But, what drives me nuts are all these bands that want to sound like them and do the whole lo-fi thing. They pull it off, and are a cool band; everyone else is biting a not so good idea. Why the fuck would you want to record in low fidelity? So people can go see you live where you sound big, hopefully, and then listen to your cd, record or whatever, and then you sound like a shit demo. Silly trends in my opinion, but who the fuck am I, right? Maybe I went a bit off course on this question?

In “Jenny,” what made the band think of calling her an asshole. The reason I ask is because asshole is a word more traditionally directed toward a man. Was it simply a case of a lyrical twist? Or was it another reason?
That’s funny. Well, the person who the song is written about is not named Jenny. However, she was an asshole! Jenny sounded good for the song and I didn’t want to be direct with using her real name. Personally, I think anyone can be an asshole, men and women both alike. I wasn’t trying to be creative with it; I just really hated that bitch.

Currently, is the band a trio or four-piece?
We are a 4-piece band. We recently lost our bass player, we’re still pals though. Moises Arteaga (Discontent & The Savoys) has been filling in with us until we find someone for the long run. We used to be a 3 piece for like 7 months or so. We have had drummer issues over and over again. So we said, “Fuck it.” We had our buddy Sam Gallagher record drum tracks for us for our live set. We put triggers, effects, on the drums to make them sound like a drum machine and kept the drumming simple and not too busy. We played live to the tracks for a few months just to get out and play live. People dug it! However, it did limit us a lot! We couldn’t just go to practice and jam on new shit. All we had were those tracks to play our set. Finally we hit up Billy Parkinson to come play with us. It turned out that he really wanted to anyway. He’s great! Rock solid and just as nuts as we are! It’s rare to find a drummer who is not a prima donna or egomaniac.

50 years ago people use to buy music and get their water for free, now people pay for water and get their music for free. How do you think this affects music in any way?
Ha-ha!!! Never thought of it that way. I think it kind of sucks that bands really don’t make money-selling records. On the other hand, the Internet is a beautiful thing! Bands need to adapt and give it away for free digitally. Sell your shirts, vinyl, buttons, stickers, etc… But if you can put your music in the hands of countless amounts of people by giving it away for free on the Internet, it’s a no brainer. It’s not like you’re going to make a ton of money like Green Day, U2, or any of these safe, crap bands.

Where can people hear the band?
All of our music can be downloaded FREE on our Three Two Ones Facebook page, ReverbNation, and Bandcamp. Our Jenny 45 can be purchased on our Bandcamp page.

What’s next?
Keep playing, writing, & having fun! We will be playing in Texas January 3 though 8 via our friend Evan Henry at Dallas Distortion Music. Then we’ll return to Texas in March for SXSW.


Learn how to place music on itunes at ReverbNation.com